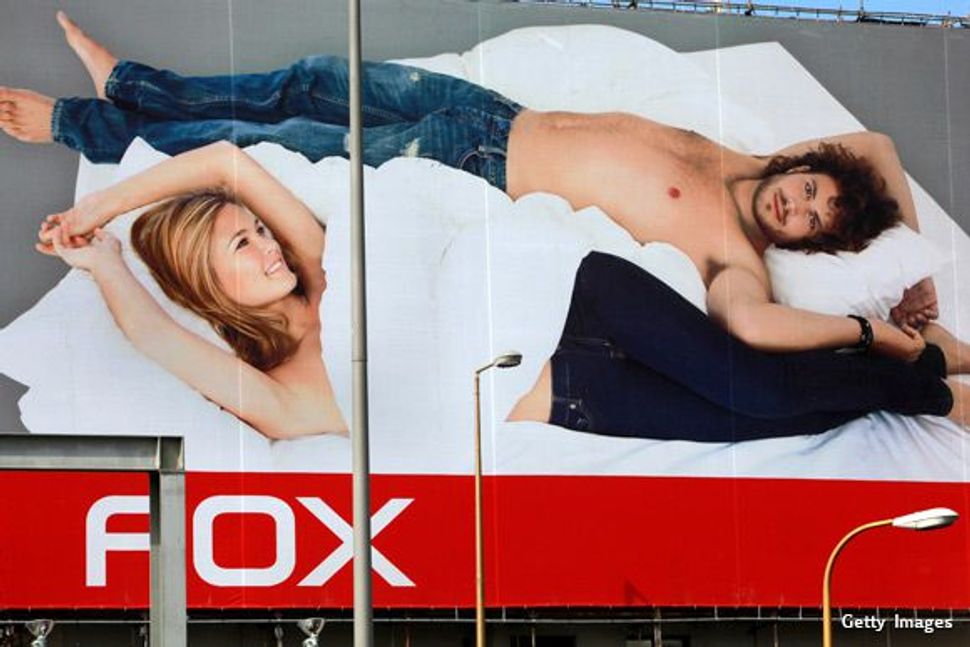 There are only two people whose gargantuan faces greet drivers along Tel Aviv’s Ayalon highway. One is the larger-than-life-even-in-death Lubavicher Rebbe. The other is Bar Refaeli, possibly the most recognized Israeli face (and body) among American adult males.

Both billboards – and the glaring absence of any others – are indicative of the frightening and growing imposition of radical ultra-Orthodoxy on public life in Israel and the pressures women face.

Last year, after Israel’s Transportation Ministry declared that the billboards swamping the Ayalon were dangerous for drivers, massive white sheets were draped covering all of the advertisements but one. Chabad mysteriously got itself excused, and only the Rebbe remained, alone but seemingly content in his role staring down at motorists.

Fast forward to last week, when the Fox clothing chain successfully challenged the Rebbe’s monopoly on the Ayalon and received permission to hang its own advertisement. Out came a ten-meter high picture of Bar Refaeli in a provocative pose with a lesser known bloke, who is currently the envy of throngs of gawking Israeli male drivers.

That’s when some vocal members of the ultra-Orthodox community got angry.

“Whether people wish to see this or not is a personal choice…but they cannot be permitted to poison the public environment,” said Rabbi Mordechai Bloi, chairman of the Haredi group Guardians of Sanctity and Education.

The group pressured the Fox company with a threatened boycott, demanding removal of the photo of Ms. Refaeli. Within a day, the billboard came down, replaced by a more innocent-looking head shot of the model.

This entire situation puts women in a dilemma: Which is worse for us, the advertising industry which promotes unrealistic images of young women, or ultra-Orthodox pressure to make women invisible? The answer, of course, is, both.

On the one hand, the advertising industry is notoriously destructive for women and girls. Photoshopped images of women/girls whose hips are narrower than their cheekbones were recently the focus of a top story at the New York Times. The damaging impact of these images on the self-concept of girls and women cannot be overstated. Kudos to Dove’s Campaign for Real Beauty and the “Too big for my Skin” campaign for powerfully addressing this issue . I have shown these wonderful videos to the girls and women in my life. We must talk back to this culture.

On the other hand, radical ultra-Orthodoxy, the culture that called for removing the Bar Refaeli ad, is hardly protective of women. Indeed, Bloi’s language of “poison” emphasizes how much women and our bodies are viewed in this world as threatening, dangerous, and “poisonous” to men. The rhetoric that leads to obsessive covering of women’s body has nothing to do with women’s well-being and everything to do with the ultra-Orthodox drive to remove women’s presence from men’s public lives.

Over the past year, this radical ultra-Orthodox removal of women from the public sphere has taken on new and ominous tones, and has been enforced with frightening acts of violence by the self-appointed “Modesty Patrol.”

Members of this group have been responsible for violently attacking women in their homes, on buses, in shops, and on the street, with fists, tear gas and acid, and even kidnapping a baby.

Rabbi Bloi’s insistence on removing the image of Ms. Refaeli legitimizes this violence against women. It encourages the use of force and muscle to remove the female body from the public sphere. No matter how sexualized advertising is, I would rather ensure freedom of expression and maintain Israel as a democratic society than cave in to real, life-threatening pressure on women to be invisible.

Ultimately, though, women’s well being is under threat by both religious and secular culture. We have to find ways to fight both trends in order to protect ourselves. I hope all the smart, strong women and girls out there have the courage and wisdom to fight these two battles at the same time.