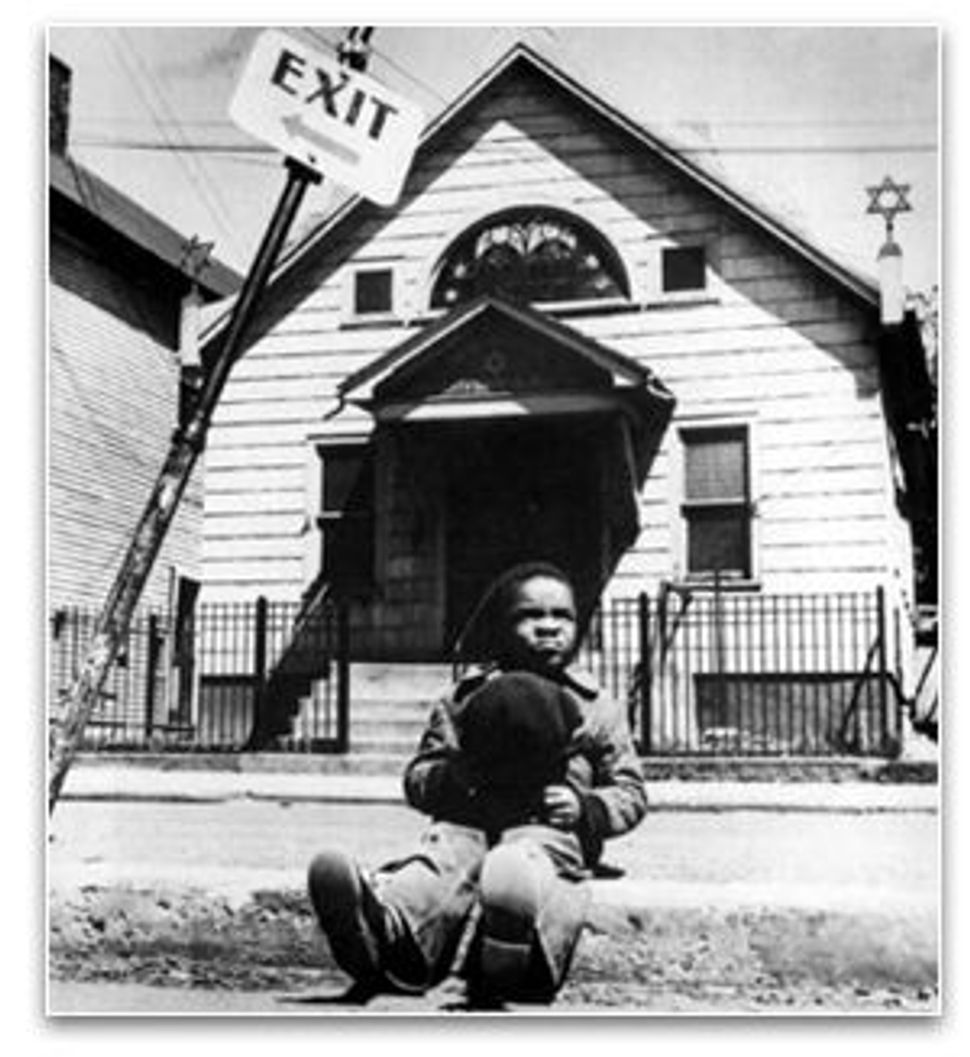 “Everyone we knew read the Forverts. After my father was finished with it, my mother would use it to wash the floor, and one of my earliest memories is of walking on that sea of Yiddish letters…”

“My sister! The woman in this picture, right here, that’s my sister!”

“Miss, I’m 98 years old, and I just want to tell you that the Bintel Brief taught me what a lesbian is.”

Since April, I’ve been visiting bookstores, synagogues and other venues around the country in support of our new book, “A Living Lens: Photographs of Jewish Life from the Pages of the Forward”. At nearly every stop, someone from the audience has stolen the show. I’ve been entertained, enlightened and harangued, brought nearly to my knees with laughter and to tears more than once. These stories — some devastating, others hilarious, nearly all poignant — are simply too good to keep to myself.

And so beginning this week, as I travel around the country on a tour organized by the Jewish Book Council in celebration of Jewish Book Month, I will be filing regular dispatches from the road. The first one is the most personal, and the longest, but don’t be alarmed. The rest of the entries will be short, unburdened by too much of my own prose. Instead, I’ll try to offer plain retellings of what I think are some very unplain questions, anecdotes and statements. Always the statements. Indeed, this tour has confirmed my long-held maxim that you know you’re at a Jewish event when the first person up at the mike at the Q&A begins, “I don’t have a question, I have a comment.”

The entries in this blog will be animated by history — that of the American Jewish community at large, of course, but also of our newspaper and the individuals who share their stories with me. So it seems particularly fitting that one of my first stops on the Jewish Book Fair circuit was to be in Rochester, one of my own ancestral lands.

My maternal grandmother, Anne Cohen, is part of the Aroeste family, who were among the many Sephardic immigrants to settle in Rochester at the turn of the last century. The family was from Monastir, a town in what was, when they left it, still the Ottoman Empire (This explains why my relatives always considered themselves “Turks,” even though Monastir — now called Bitola — is in present-day Macedonia.) In Rochester, they joined a small but established group of Jewish immigrants from Germany, the first of whom arrived in 1843, as well as a growing community of Yiddish-speaking Jews from Eastern Europe.

Since my Rochester event represented a heritage trip of sorts, I invited my mother along (but only for this one event; as she assured everyone, “my daughter doesn’t usually take me anywhere.”) Before the event, she and I were taken to dinner by Andrea Miller and her husband, Dennis Kessler. Like me, Dennis is half-Ashkenazic, half-Sephardic. But, unlike me, he speaks both Yiddish and Ladino. (I speak neither and, yes, I realize how disappointed this makes both sides of my family, not to mention my employer.) It was impressive enough when Dennis began chatting with my mother in her family’s native tongue, but when he whipped out a book review he wrote for the Forverts in 1984… well, I threw in the towel. 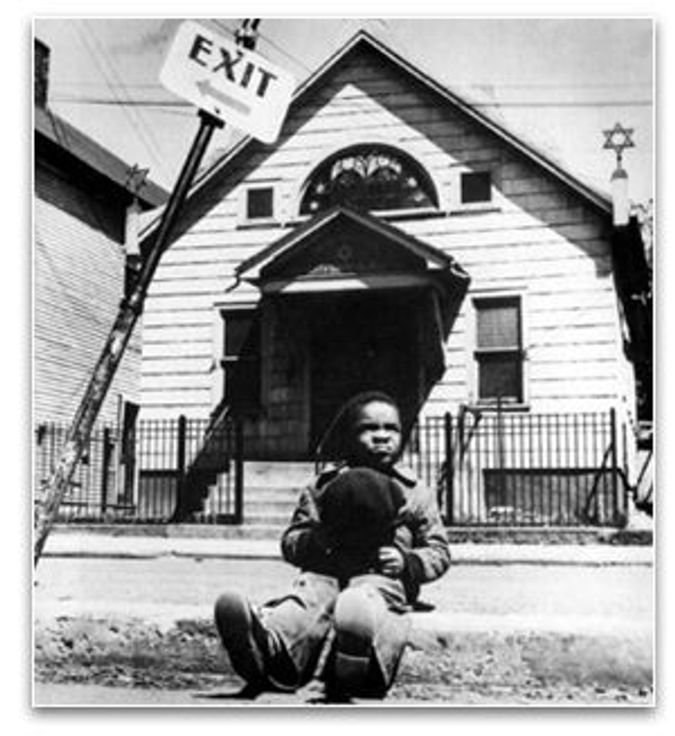 At dinner, my mother told the story of our Rochester connection. When they married, my grandparents moved to Brooklyn, in part because my grandfather had a job as a presser in New York City’s garment industry. (Actually, both of my grandfathers were pressers, but that’s a story for another project:.) Each summer, my grandmother would leave her husband behind and take her three children to Rochester to visit her family. My mother, who has an astonishing eye for detail, remembered not only the exact address of her grandmother’s house — 54 Hanover Street — but the layout of the hallways and rooms, as well as some of her grandmother’s rules and traditions. The house abutted the Sephardic shul (see picture) and each Saturday afternoon, men and women would stream in for a Kiddush of brown hard-boiled eggs and burekas. “And oh,” my mother added, “it was my job every Friday afternoon to rip the toilet paper into squares, so people wouldn’t have to tear on Shabbat.”

When I got back to the office the next day, I received an e-mail from a man named Roberto Lovenheim:

Hi Alana, I live in NYC, but was born in Rochester and still have a lot of family there,” he began. “I was there over the weekend and went to your lecture Sunday night with my sister. She asked you about your mother’s maiden name at the book signing. Later I asked my father, Andrew Lovenheim (91 years old) about it, and here is what I got: Hanover Street was divided between the Ashkenaz and Sephardim. You could always tell who was whom by the smell of their cooking. [My father] lived at number 36, next to the schul. The Aroesty family was at #54. He described it as “a nice house.” On one side was a temple, The Light of Israel, and on the other side Granite’s fish market. The Kline’s lived upstairs, the Calderon’s lived behind. My father went to #9 school with Esther Aroesty [my great-aunt — A.N.], who was the only one in the family he knew well. Esther married, divorced, and married again. Her second husband was “Dusty” Granite, a well-known gambler in town, and also part of the family that owned the fish market next door. When their backyard neighbor, Calderon, married a Rosenbloom girl it was the first mixed marriage in the neighborhood between the German Jews and what they called “The Turks”…

Lovenheim’s father then zoomed out from my family to describe what happened to the city’s broader Jewish communities:

“Rochester was a city of many immigrant groups at the time, with a huge number of Germans who had come to work at Bausch & Lomb and Kodak camera works. On his paper route for the morning Democrat & Chronicle, he’d often ask his customers where they worked. The answer was usually, “Bei de Bausch,” at Bausch & Lomb. He also told me there was a Polish daily in Buffalo that had a larger circulation than the Buffalo English language papers. All of this is gone, but unlike many cities, there is a very firm time-line for Rochester. Black frustrations with poverty and police brutality suddenly irrupted into riots in the summer of 1964. The formerly Jewish neighborhood around Joseph Avenue and Hanover Street had become black as the Jews moved to the suburbs, and the local streets became the target of rage. Many of the Jewish-owned businesses were destroyed. The most beloved — Cohen’s Delicatessen — never reopened. It was the beginning of new social awareness and the end of good corned beef sandwiches in Rochester.”

Lovenheim’s account is confirmed by a wonderful book given to me by one of its authors, Michael Peres, chair of biomedical photographic communications at the Rochester Institute of Technology. The book includes more than 300 pictures and artifacts, many of which were family heirlooms donated for an exhibit at the Rochester JCC — including the few highlighted in this entry.