Duff Goldman: Ace or Not, a Jewish Baker of Cakes 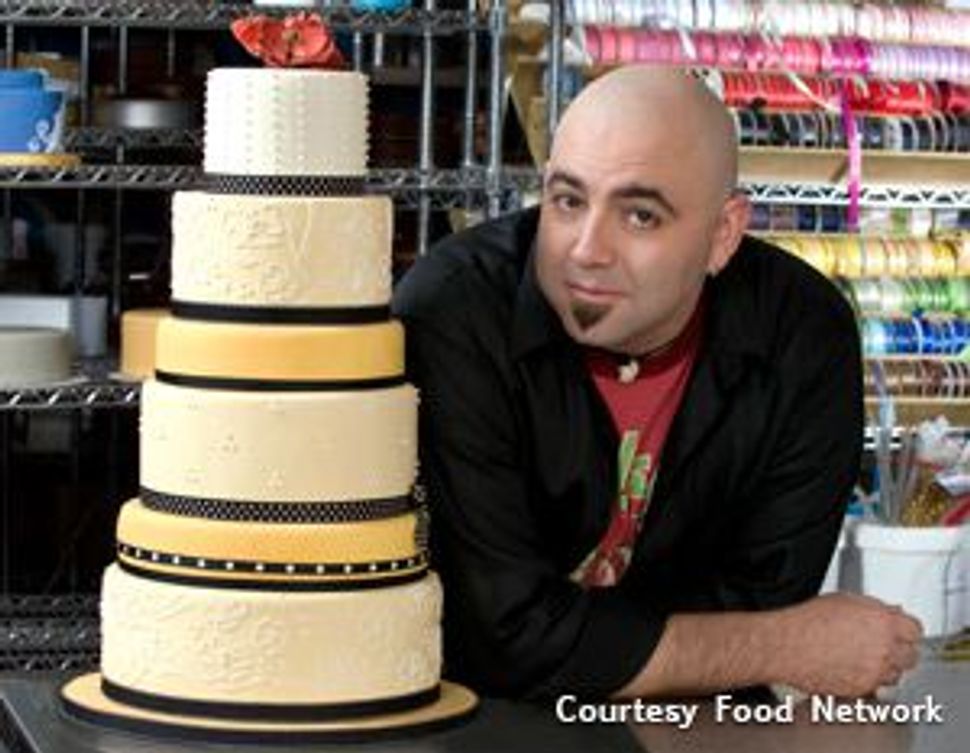 Devotees of the mouth-watering recipes for rugelach, babka, and kichel in “The Jewish Holiday Baker” (Schocken, 1997) by the eminent Joan Nathan may be reluctant to associate Jewish tradition with the toy-like, fondant-covered cake-objects produced mainly to amuse the eye by Duff Goldman’s Baltimore-based Charm City Cakes, the home of a Food Network series “Ace of Cakes.” Yet “Ace of Cakes: Inside the World of Charm City Cakes,” a new memoir from William Morrow publishers co-authored by Goldman and his TV exec brother Willie, stresses that despite his self-consciously scruffy appearance (somewhat disingenuously, his book claims that Goldman resembles a mechanic, plumber, or graffiti artist), he is ultra-traditional in terms of Jewish roots.

Scion of a Midwestern Jewish artsy family originally from the Ukraine, Goldman grew up in a Detroit suburb, raised on children’s verses by Shel Silverstein and was barmitzvahed at the Washington Hebrew Congregation, a URJ member. A post-barmitzvah trip to Israel left Goldman “inspired to achieve. Israel is full of superachievers, and the experience was very eye-opening.”

Back from Israel, Goldman was soon employed at a local outlet of a chain, “Skolniks Bagel Bakery Restaurant.” Although his book misspells the bagelry’s name as “Skolnick’s,” to this day Goldman most closely resembles an oven man at a bagel bakery, more than any graffitist or other counter-cultural aspirant. His working hipster appearance and Food Network show make him the perfect person to add a celebrity aura to the forthcoming “The Kosher Guide to Imaginary Animals: The Evil Monkey Dialogues” although his comments there will not reassure those looking for hechshers on his cakes.

Cultural preconceptions expressed in his memoir, like “Every Jewish kid is going to argue that his or her mom makes the best brisket” are, however, conventional in the extreme, providing a clue to the cheery charm of “Ace of Cakes,” a comfortingly self-contented exception on a network otherwise mostly devoted to crassly agitated shows about junk food, boorishly pushy restaurateurs, and all-devouring gluttons. Goldman’s dithyrambic description of his mother’s brisket can entertain even readers whose Jewish mothers were ungifted in the kitchen: “One bite and you’ll see the face of God. She even puts matzoh balls around the sides instead of dumplings or potatoes, and they absorb the gravy and throw a little party in your mouth.”

Watch Duff Goldman present his new book at a Michigan bookstore below.

Duff Goldman: Ace or Not, a Jewish Baker of Cakes