Why Jewish Women Are Wearing Burqas 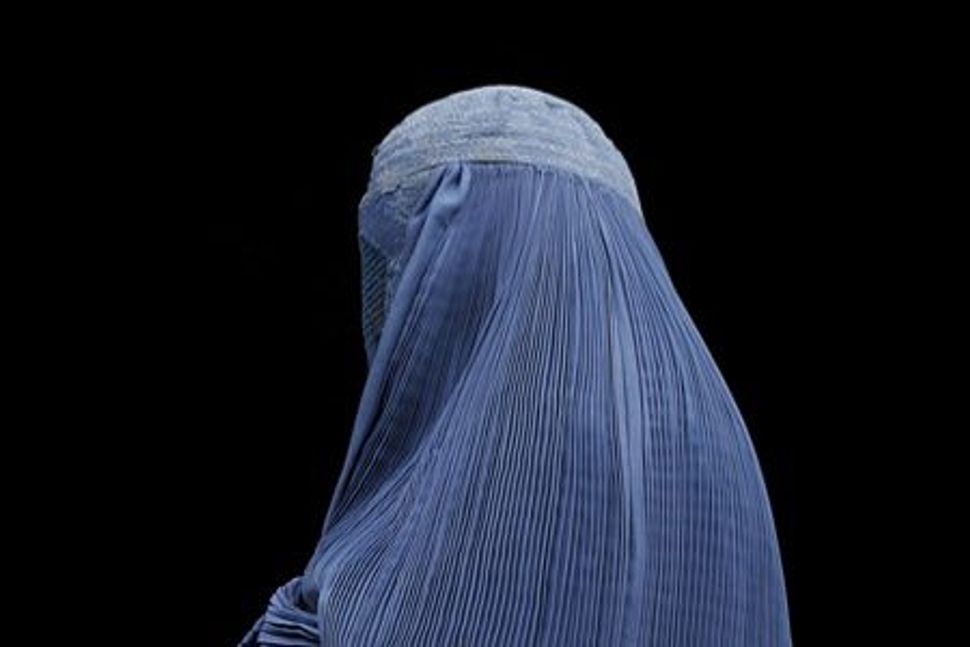 Fundamentalist Muslim women and fundamentalist Jewish women have a lot in common. Both groups live under the forced rules of ancient, male-controlled religious legal systems that place extreme emphasis on women’s body cover as the supreme symbol of righteousness and community purity. In conversations I have had with Muslim feminists over the years, the similarities between their work and the work of Orthodox feminists have been astounding. “I’m the first woman in my family to stop covering my hair,” one Muslim feminist told me, with unmistakable echoes of religious Jewish women discovering personal empowerment.

The parallel issues between Jewish and Muslim women found a startling expression this week, as a haredi woman wearing excessive body cover was shot by Israeli police who assumed her to be an Arab terrorist.

She was dressed in all black robes, and in addition to covering her hair with a black scarf, she also covered her face, with what looked like a Muslim burqa. The 43-year-old Jerusalem native was riding a bus in Kfar Saba on her way to the ultra-Orthodox community of Tel Mond, and apparently believed that her outfit was either necessary or appropriate for such a visit. Some people call this “modesty,” but that word, I believe, is a misnomer. Police asked the woman to stop, but she ran, so they shot her and detained her. She was not hurt and was later released from custody.

This story is reminiscent of the recent, highly publicized child-abuse case of Bruria Keren, the so-called “Taliban Mother.” Keren, a 54-year old Beit Shemesh mother of 12 who regularly wore layers and layers of clothing, including gloves on her hands even in the heat of summer, and also refuses to speak in the presence of a man, was convicted of severe child abuse. In keeping with her extreme views about religious women’s behavior, she habitually punished her children by pouring water on them, locking them outside, and restraining them in the storage shed. Her children were so confounded by her fanaticism that her son and daughter had incestuous sex in that shed. So much for modesty.

It seems that even in the Orthodox community, where female body cover from the ankles to the neck to the wrists is already the norm, there is currently a process of further radicalization around women’s bodies. Keren was apparently famous for the classes she delivered on this topic. According to The Awareness Center, which tracks sexual abuse in the religious Jewish community, Keren led a sect of some 50 women who regularly flocked to her like a guru expert on how best to achieve purity by being completely unseen and unheard. According to the Forward’s Daniel Treiman, this trend has spread to Brooklyn, as well. This week’s arrest is the latest anecdotal evidence of the radicalization of women’s body cover in Orthodoxy.

What is fascinating to me is how some members of the Orthodox community try to disassociate themselves from this radicalization. Shmuel Poppenheim, spokesperson for the Eda Haredit, has said that the women of the cult are “crazy”, as if his own haredi culture bears no resemblance to the women’s behavior, as if one can easily distinguish between extreme body cover that is “normal” and that which is somehow extreme.

“Even the strictest rabbis who require women to wear black head coverings and black stockings understand that a woman must allow herself to be a woman,” he added.

In other words, “normal” body cover makes women “womanly”, but some unspecified amount of cover transforms a woman from “womanly” to “insane.” As if women – bombarded with radical messages of body cover supposedly in the name of God that claim the purity of the entire Jewish nation dependent on women’s invisibility – are somehow supposed to be able to know the difference between body cover that is “womanly” and that which is “crazy”. Given the predominance of this rhetoric in the Orthodox community, it was only a matter of time before women internalized the messages to the extreme.

What is really infuriating is that none of the male “leaders” in Orthodoxy who rant and rave about women’s body cover now claim responsibility for the current extremism. It’s not their fault. Women have merely taken it “too far.” Right.

Here is some feminist wisdom on the subject of excessive body cover in the name of religion:

We should not be debating the clothing itself but what it stands for, the sexual morality and based on morality that says men cannot restrain themselves sexually. They are like wild dogs … and we women are like pieces of tempting meat and if we do not want to put society into chaos, then we should ideally stay behind closed doors and if it’s necessary for us to go outside of the house, then we need to veil ourselves. …[A] woman who veils herself of her own free will, is actually wearing a banner telling every man that he is a potential rapist and he is incapable of sexual restraint and I would like to know what men think of this and a woman who covers herself freely is also telling every woman who does not that she’s a whore.

The speaker is not Jewish, but Muslim feminist Ayaan Hirsi Ali — a woman whose ideas and courage should inform discussions of Orthodoxy, gender and women’s body. If Orthodox Judaism, like Islam, ultimately assumes women to be primarily objects of male sexual desire, it is hardly surprising that Orthodox women have started to take up the veil.

Why Jewish Women Are Wearing Burqas