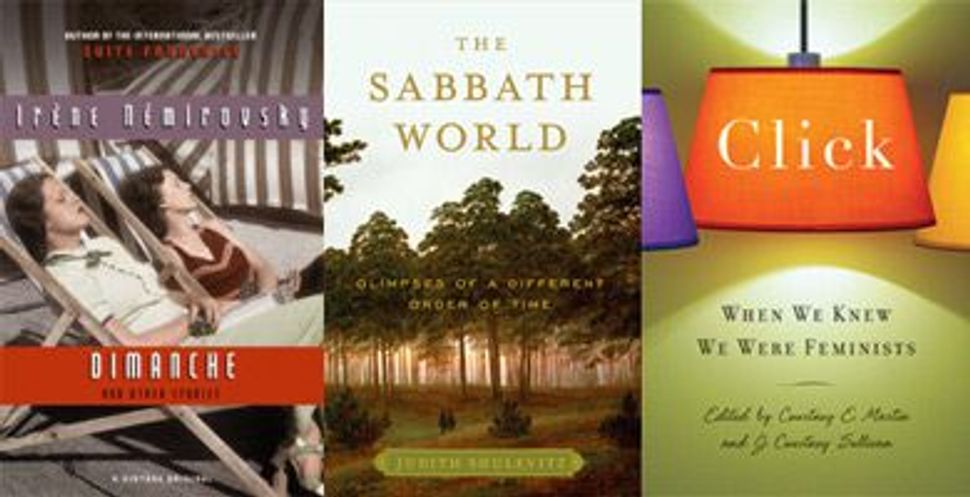 • A diverse group of writers share their feminist “aha” moments in the new anthology “Click: When We Knew We Were Feminists” (Seal Press), edited by J. Courtney Sullivan and Courtney E. Martin. For contributor Elisa Albert, the click came when she was cast as Vashti in her Jewish day school’s Purim-themed musical review; for Salon.com’s Rebecca Traister, it came while she was reading Katie Roiphe’s controversial treatise on date rape.

• In “Heaven: Our Enduring Fascination With the Afterlife” (Harper), Newsweek’s religion editor, Lisa Miller, writes about how we think about the world to come. She looks at heaven’s origins in ancient Jewish thought, the way ideas about the afterlife were shaped by different cultures over time and how the belief in heaven has influenced the way we live as individuals and societies.

• Literary critic Judith Shulevitz weaves together research about the history of the Sabbath with her personal relationship with the day of rest in “The Sabbath World: Glimpses of a Different Order of Time” (Random House). She examines the Sabbath as both a utopian ideal and a ritual that has evolved in different religions over time. Read Mark Oppenheimer’s Forward review of “The Sabbath World” and Shulevitz’s op-ed on making the Sabbath “keep-able.”

• For her new book, “The Husbands and Wives Club: A Year in the Life of a Couples Therapy Group” (Touchstone), Elle magazine senior editor Laurie Abraham spent more than a year following five couples as they attempted to work through their relationship troubles. The book, which originated as a New York Times article, employs psychology, literature and science to interpret the marriages. The unions alternately prove dysfunctional and surprisingly strong.

• The new translation of “The Second Sex” (Knopf), Simone de Beauvoir’s feminist masterpiece, includes passages left out of the original translation, completed nearly 60 years ago. The book’s political, sociological and cultural commentary on feminine “otherness” has aged well, and should fit right in with the nuanced ideas of feminism prevalent today.

• Between 1934 and 1942, the year she was killed, at age 39, at Auschwitz, Irène Némirovsky penned the 10 short stories featured in “Dimanche and Other Stories” (Vintage). In them, Némirovsky, who was born Jewish but converted to Catholicism, captures the atmosphere of prewar and wartime France with the pointillistic detail that won her acclaim for her accidentally discovered and posthumously published novel, “Suite Française.”

• “The Murderer’s Daughters” (St. Martin’s Press), a haunting new novel by Randy Susan Meyers follows two Jewish girls, Lulu and Merry, in the three decades that follow their mother’s murder at the hands of their alcoholic father.

• “Saving Henry: A Mother’s Journey” (Hyperion), depicts Laurie Strongin’s son’s ultimately fatal battle with Fanconi anemia, a rare genetic disease that disproportionately affects Ashkenazi Jews. In order to try to help her son, Strongin and her husband used a controversial in vitro procedure to try to cure him, and in the process became advocates of stem-cell research.

• In “Devotion: A Memoir” (Harper) writer Dani Shapiro seeks answers of the higher sort from a yogi, a Buddhist and a rabbi. Shapiro, born to an Orthodox father and a secular Jewish mother, never arrives at easy answers, which is ultimately the book’s strength. Read the Forward’s coverage of “Devotion” here.