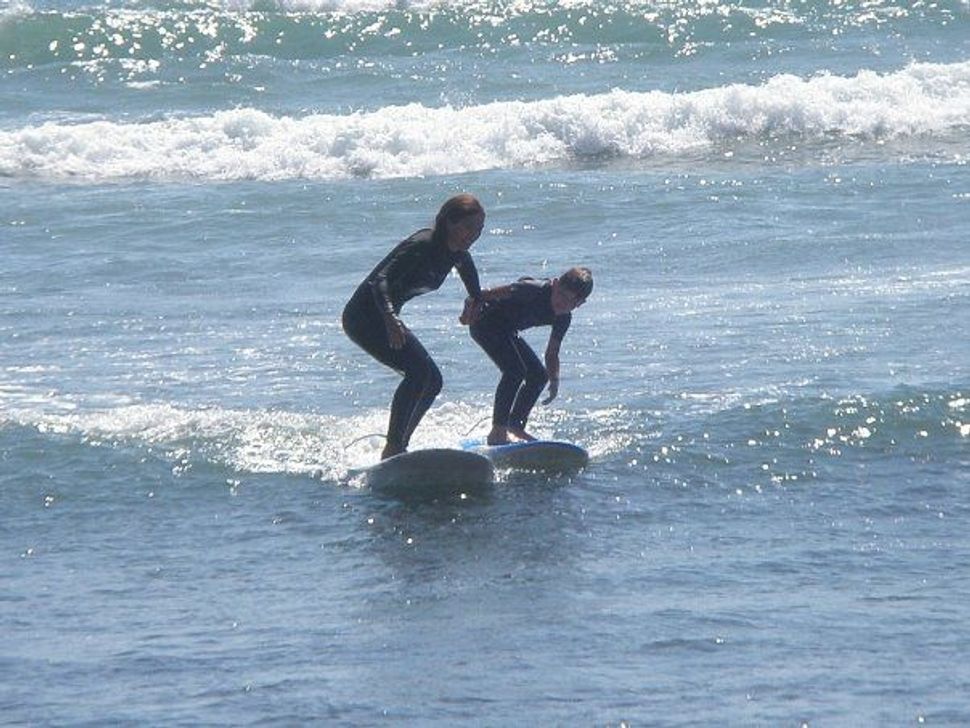 Navah Paskowitz-Walther surfs with one of her sons.

Knowing Navah Paskowitz-Walther today as a San Fernando Valley stay-at-home mom who is active in her synagogue and children’s Jewish day school, it is hard to believe that, as a child, she lived a peripatetic existence in a 24-foot camper. Growing up as the only girl in a Jewish family of nine children, she surfed every day, never went to school, and bowed to her father Dorian “Doc” Paskowitz’s heavy-handed and idiosyncratic approach to parenting. Her story sounds like something in a movie, which it actually has been and will again be. The highly unconventional Paskowitzes, the largest and best-known family in surfing, are the subject of the 2007 documentary, “Surfwise,” — reviewed here in the Forward — and a feature film about them is currently in pre-production.

While the focus of these films is on all the Paskowitzes, Navah’s story deserves special attention — not only because she is the sole daughter, but also because of the particularly Jewish role she has played and continues to play in the family.

Navah has taken on the responsibility for passing Judaism on to the next generation. While Navah, like all of her siblings, has intermarried, she is the only one raising her children exclusively in the Jewish faith. She, with the full support and participation of her husband of German-Quaker background (whom Doc ironically and affectionately refers to as “the most Jewish son I have”), is making sure that her daughter and three sons receive the serious Jewish education she never had.

Under the leadership of her father and with the compliance of her mother (a convert to Judaism of Mexican Indian descent), Navah and her siblings practiced their “own version of Judaism,” as she describes it. Her father insisted that they observe holidays and the laws of kashrut. The family’s weekly Kabbalat Shabbat celebration and festive meal was a highly anticipated change from the usually austere fare on which they otherwise subsisted.

On her own from the age of 15 and without any formal education, Navah supported herself by singing in a band with her brother Adam (now the lead singer of The Flys and Jetliner), modeling swimsuits, designing a women’s wetsuit line, and working summers at her family’s surf camp on a beach near San Clemente, Calif. But the job that Navah, now 40, has had the longest and which she considers to be the most important, is that of Jewish mother. It involves “forcing the kids to do the traditional stuff,” and making sure they learn Hebrew, which Navah herself failed to master despite living in Israel at one point for a year and half and studying in an ulpan. “I was hopeless from the get-go,” she said.

The Holocaust figures prominently in her sense of Jewish identity, and in the one she wants to impart to her children. She recalls her father putting on tefillin every morning and, while not exactly reciting the traditional Shacharit prayers, speaking to the victims of the Holocaust. “My dad was so affected by the horror of the Holocaust, that it was a daily reminder in our home,” she said. There was never any question as to why he fathered so many children, gave them all biblical names, and insisted on raising them as Jews, notwithstanding his otherwise untraditional ways.

It was when she visited Yad Vashem during a six-month stay in Israel with her parents and her younger brother when she was 14 that she realized that “it was my life’s mission — to live a Jewish life. To remember those lost. To live for them, really.” Beyond the connection to the Holocaust, she wants her children to hold Israel dear. “We are extremely lucky to have found a Jewish day school that promotes and fosters love of Israel as a basic part of the curriculum and has many Israeli teachers and students,” she said.

She is planning to hold her daughter’s bat mitzvah in Israel next year.

“A chaotic lifestyle leads to a chaotic mind,” Navah said, reflecting on her upbringing. She said that it has been a long journey for her toward reconciliation with her parents — with her father, in particular. It has been Judaism that has played a key role in her ultimately making peace with her past and mending familial relationships. These days, Navah relishes being “The Jew” of the Paskowitz family, the one to whose home everyone comes for Passover and Hanukkah.

Navah says she would “never in the world change the experiences” that she and her brothers had together. But not wishing to change the past is not the same as wanting it to be your present or future. Navah still surfs, though not as regularly as she would like, and has taught the sport to her children. It is thanks to what their grandfather taught their mother that the kids can stand on their boards, but they are going to ride a different wave.