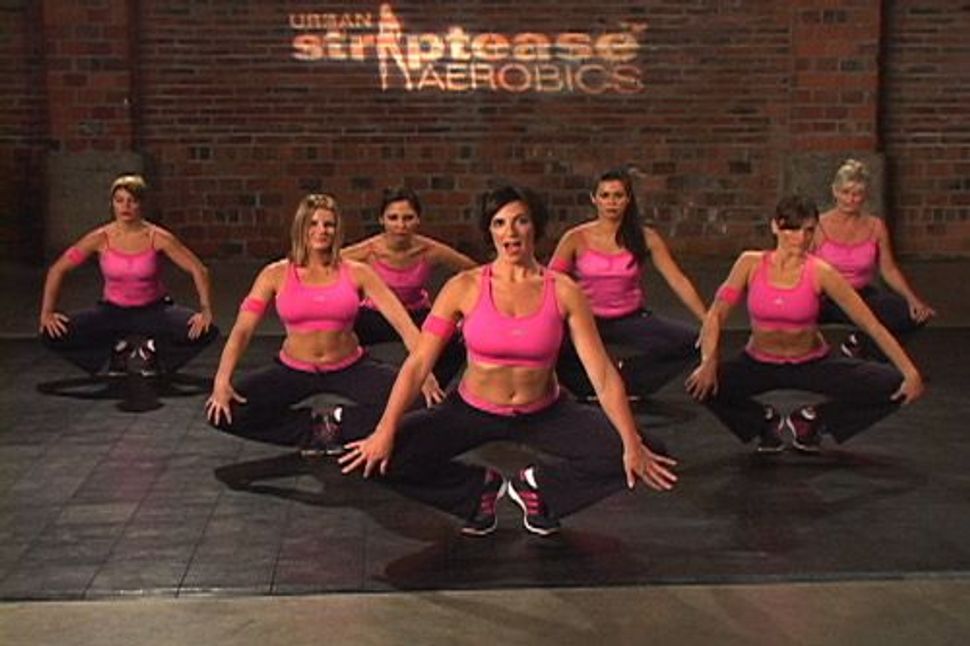 Well it looks that while I was busy ignoring striptease-as-exercise, the genre has become increasingly popular, spreading around globe. Just this past week, newspapers in Mumbai, India, Antioch, Calif.,, Tampa, Fla., and Bristol, England have written about the arrival of these workouts, which can involve stilettos, feather boas, and “sexy pouts.”

Even conservative Fox News has declared that stripping has become mainstream, in a recent column by Jenny Block on the news channel’s website. “Why?” Block asks in the intro to her story. “Because all preconceived notions aside, stripping is sexy.” Block’s explanation for the appeal of striptease is that it builds confidence, and “exercises the brain” in the art of seduction.

Block is right: Stripping has gone mainstream, and if the proliferation of these classes don’t prove it, I imagine the recent hi-jinks of underage starlets like Miley Cyrus, who incorporated pole-dancing in her dance repertoire, and “Gossip Girl” star Taylor Momsen, who has developed a taste for stripper shoes, do.

While I don’t doubt that some women find playing stripper empowering, this is certainly not the only — or the healthiest — way to boost confidence. I imagine that activities like yoga, surfing, buying a new pretty dress, going dancing, or even getting into some feminist erotica might do the trick, without encouraging women to partake in direct reenactment an industry that commodifies women for the enjoyment of (often, inebriated) men. I am certainly not the first to question the logic behind this women’s empowerment argument, a point succinctly, and hilariously, made a few years back on an episode of “The Colbert Report.”

There is a movement to disassociate pole-dancing with its ties to adult entertainment (and phallic associations) and turn it into a legitimate sport, which is a reasonable idea. But I would bet that only a small fraction of the growing numbers of women getting into the exercise see it this way.

Or am I being too conservative here? Clearly, I can’t ignore striptease fitness anymore, so should I just get with the program, loosen up a bit, throw on a boa, and take a few lessons on the right way to shimmy? Everyone else seems to be doing it. I love dancing, have never considered myself a prude, and have no issues with doing a little extra something in order to attract the opposite sex. But I just don’t think I can. I have no problem with sexy, but I am still choosy about whose version of sexy I replicate, and, well, stripper sexy will never be my sexy.

I just wish Exercise TV and Time Warner Cable saw it that way, too.