Why the Tefillin Barbie Minyan Gives Me the Creeps 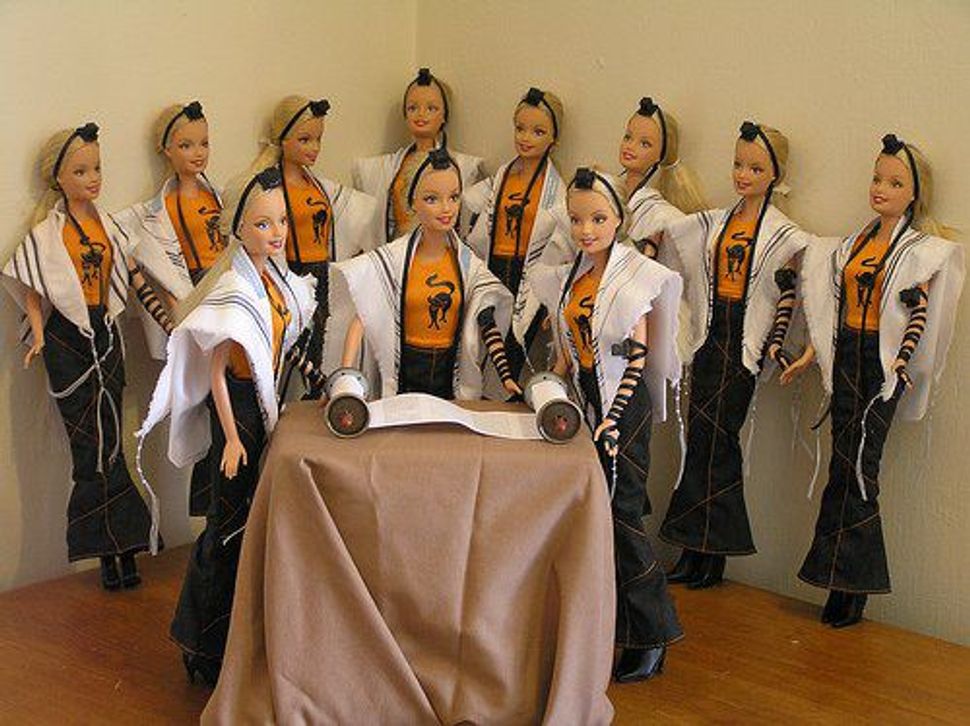 The first time I saw Tefillin Barbie, — the brainchild of Torah scribe Jen Taylor Friedman — she was on the back of the stub of an entrance ticket to the Jewish Museum Berlin. She wasn’t on my ticket stub, but rather on that of my companion. But seeing that I just had to have her, I arranged for a quick exchange. My colleague didn’t seem to mind — he wasn’t as taken by the photo of Tefillin Barbie as I was.

It’s a bit hard to say why exactly it was love at first sight for me. It couldn’t have been nostalgia; I was not exactly a big Barbie fan when I was a girl.

I think in large part, it probably had something to do with my having recently seen Tiffany Shlain’s film, “The Tribe,” which uses Barbie (based on the German “Lilli” doll) as a symbol for 20th century Jewish American identity and acculturation. Perhaps, when I laid eyes on Tefillin Barbie, while standing there in the once-Nazi capital, I heard her proudly say, “Look at me! I survived! I am a beautiful woman, a beautiful Jewish woman. And I have gone on to do great things, such as changing ways in which we Jewish women see ourselves and our roles in the Jewish community.”

However, this love fest with Tefillin Barbie was relatively short-lived. It ended when I realized that Tefillin Barbie was not unique. Indeed, there is actually a whole minyan of impossibly proportioned plastic dolls. A photo of a group of the davening darlings appeared on the Facebook page for Women of the Wall, posted there by one of the organizations’ supporters who surely thought it made a positive statement.

I, on the other hand, was immediately turned off by this scene of 11 Barbies gathered around an unfurled miniature Torah scroll. Sure, Barbie was still wearing her tallit and tefillin, which was why I liked her so much in the first place. But now I saw that she was also wearing an ankle-length, long denim skirt. Only the top half of her artificial body could be viewed in the photo on the back of my museum ticket stub.

An ankle-length denim skirt screams “frum!”; and “frum” is not me. I suppose I would not have been bothered by the skirt had only one or two of the dolls been wearing these skirts. After all, I am a strong proponent of religious pluralism and have found myself many a time in the company of Jewish women is modest dress. The problem was that all the dolls were dressed this way. Tefillin Barbie no longer represented Jewish women to me, but rather only the religiously observant kind.

It is precisely the pluralism and diversity of Jewish women that make us so interesting and strong. In fact, Women of the Wall is a perfect example of how Jewish women of all stripes can come together to change the Jewish world. And not only all stripes, but all shapes and sizes, too.

A minyan of perfect, blond Barbies sends the opposite message. While the dolls give off a creepy Stepford Wives vibe, the life-size and variously proportioned Jewish women, fighting for the right for egalitarian prayer at the Kotel, pack a real punch that lives up to their organization’s expressive acronym.

So, it turns out — at least for me — that there can be such a thing as too much beauty.

Why the Tefillin Barbie Minyan Gives Me the Creeps