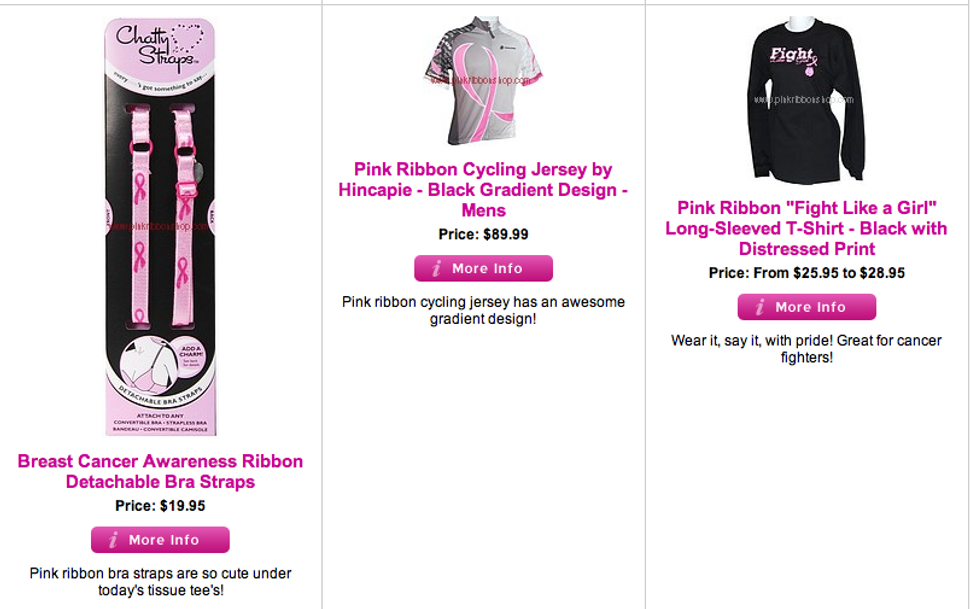 A screenshot featuring some merchandise for sale at The Pink Ribbon Shop. (Click to enlarge) Image by pinkribbonshop.com

I am aware. It’s not because of the extremely effective marketing, with the pink ribbon campaigns. It’s because I lived in your house, and you lived in mine.

It seems that my mother’s breast cancer was just bad luck, and not genetic. Even if my mother didn’t have one of the genetic mutations for breast cancer most common in Ashkenazic Jewish women — and didn’t pass that gene onto me — I’m a woman, and one in eight of us will be diagnosed with the disease in our lifetime. That means that I should feel moved to light a candle and walk around a track with a lot of other people. I should love October, I should welcome a chance to spread more “awareness” of breast cancer.

But awareness is literally the least we can do. There’s a huge gap between being aware of breast cancer as a possibility and being able to access screening methods and treatments, which unfortunately, many women cannot do.

In her 2009 essay, “Not So Pretty in Pink,” Barbara Ehrenreich writes, “To some extent, pink-ribbon culture has replaced feminism as a focus of female identity and solidarity.”

I won’t belabor her articulate point, but suffice it to say, it never ceases to amaze me that women are uniting around a disease, and not also around choice or education or, ironically, health care.

Still, perhaps no one knows better than a person deeply affected by cancer that sometimes you need to do things that mimic power, just to keep yourself sane. Some of us do this through more screening, others through buying pink ribbon-laden merchandise. In my worst moments (usually at the doctor’s office for any kind of regular exam), I’m not thinking about feminism; I just want to be safe, to be able to depend on my body. It’s a totally different sort of grasp at power — desperate, rabid, breathtaking.

So far, I’ve been able to leave those appointments in tact, if not still shaking, with the knowledge implanted in my brain yet again that I’m not my mother, at least not yet. Maybe if I ever do get breast cancer, I won’t feel the way I do now about the way pink ribbons seem have replaced actual action. It will matter less to me that anti-choice folks have co-opted breast cancer as a means of scaring women out of having abortions, and that politicians seem to be paying attention. I’ll be too busy worrying about chemo and lymph nodes, remembering my mother and the drives we took from my high school to her doctor’s office, trying not to think about what news we might get there. In the end, though, this is about the life we live now.