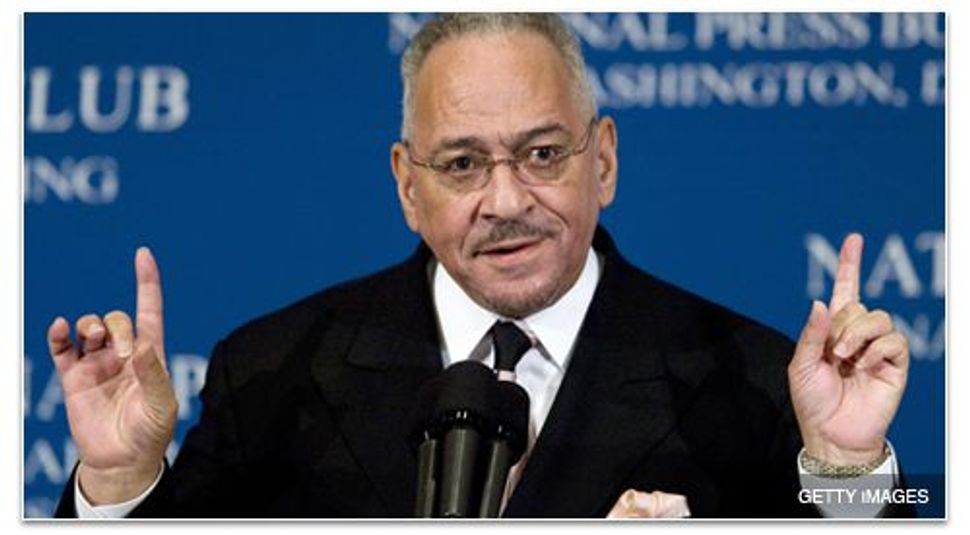 The Rev. Jeremiah Wright’s views on Israel have been an interesting footnote (and for Jews, far more than a footnote) in the larger controversy that has swirled around him. Many American Jews, it’s safe to say, have been angered by his strident criticism of Israel, as well as the publication of anti-Israel polemics in his church’s newsletter. Indeed, Barack Obama, in his speech responding to the Wright controversy, went out of his way to criticize his former pastor’s “view that sees the conflicts in the Middle East as rooted primarily in the actions of stalwart allies like Israel, instead of emanating from the perverse and hateful ideologies of radical Islam.”

Now, Wright is giving us a glimpse into his preferred source of information when it comes to Israel. In his press conference today at the National Press Club, Wright was posed the following question:

You have likened Israeli policies to apartheid and its treatment of Palestinians with Native Americans. Can you explain your views on Israel?

Where did I liken them to that? Whoever wrote the question, tell me where I likened them.

Have you read the Link? Do you read the Link, Americans for Middle Eastern Understanding, where Palestinians and Israelis need to sit down and talk to each other and work out a solution where their children can grow in a world together, and not be talking about killing each other, that that is not God’s will?

Americans for Middle East Understanding is a New York-based pro-Palestinian group, and The Link is its bimonthly newsletter. AMEU’s recommended list of books on the Middle East includes Jimmy Carter’s “Palestine: Peace Not Apartheid,” Noam Chomsky’s “Fateful Triangle,” Norman Finkelstein’s “The Holocaust Industry” and a number of other books that aren’t particularly friendly to the Jewish state. The latest issue of The Link features a front-page article titled “State of Denial: Israel, 1948-2008” by the radical anti-Zionist Israeli historian Ilan Pappe.

It’s certainly good to know that the Rev. Wright has formed his views about Israel using fair and reliable sources of information (just as he has, I’m sure, when it comes to his opinions about the origins of AIDS).