In Israel, Attempts To Remove Women From the Public Sphere 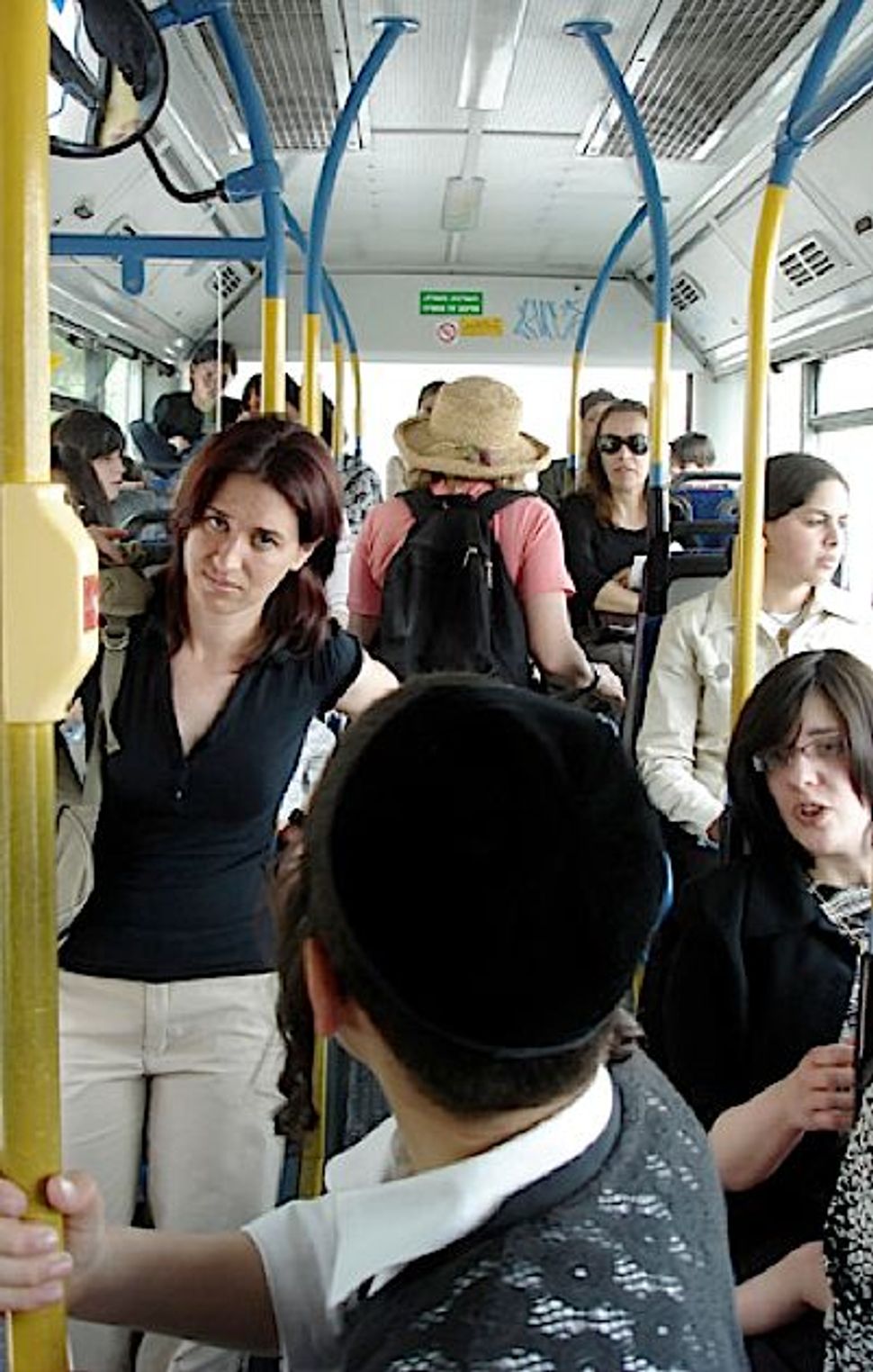 On Israel?s gender-segregated buses, women are relegated to the back. Image by Rahel Jaskow

When the first gender-segregated buses appeared on the Israeli roads in 1997, I don’t think anyone could have predicted how far the phenomenon would spread. Today, not only are there gender segregated buses in many Israeli cities — and even on bus lines that go through non-Haredi neighborhoods — but there are segregated post offices, banks, health care centers, police stations, pharmacies, supermarkets, candy stores, conferences, elevators, Luna Parks, cemeteries, city streets, schools, courtyards, tours of historic sites, and the Western Wall. There have been conferences of the Education Ministry and events from a variety of local municipalities that demanded segregation. And there is currently pressure to introduce separate trains and buses as well.

“This is actually against the law,” said Knesset Member Nitzan Horowitz on Tuesday at a special Knesset session dedicated to examining this troubling and growing phenomenon. In fact, all of these locations are meant to be public spaces that, according to a 1949 decree of the first government — signed also by four religious parties at the time — must be guaranteed full equality. In addition, a 2000 law forbids “discrimination in products, services and entrance to places of entertainment and public spaces”.

Public gender segregation is not only against the law but it is also a threat to democracy, Horowitz says. Moreover, the phenomenon is becoming more extreme and more widespread, according to Attorney Rikki Shapira-Rosenberg of the Israel Religious Action Center who authored the research report on gender segregation in public spaces that was the subject of the Knesset session. “People from the Haredi community who spoke to us anonymously were often relieved that they had someone to talk to about this,” she said. “It was so important to give their experience a name, so that they could identify what feels so wrong to them in their lives.”

It is a mistake to think that the entire Haredi community is in favor of segregation, she added. “There is a small group of extremists who put pressure on all kinds of institutions, and unless someone comes forward in protest — which few ever do — they cave into the pressure, often not even realizing that it’s against the law. Members of the community, meanwhile, are afraid to speak up or stand up to it. They don’t want to be ostracized in their communities. So they suffer in silence.”

Segregated buses make it difficult for children traveling together and often a child of one gender will be forced to sit far from the family members on the other side of the bus. A holiday Luna Park event geared for the Haredi community was a nightmare for parents who had to drive their sons there in the morning and their daughters in the afternoon.

“The evil inclination of Haredi men has overpowered them”, quipped Shulamit Aloni, the elder stateswoman in the room, who offered historical perspective and recalled some of the sexist remarks she received from government officials when she tried to introduce a bill against violence against women in 1973. Times have perhaps changed, as evidenced by this gathering — “You are all our allies,” the director of the Israel Religious Action Center, or IRAC, Anat Hoffman, told the crowd — but in some ways, the threat against women’s bodily safety is getting worse.

“Let’s be clear about this,” Hoffman added. “This is not equal segregation. This is the removal of the woman from the public space, and it is a cancer spreading in our midst. Our daughters and granddaughters are going to grow up thinking that their bodies are bad, impure, dirty, and threatening.”

Proponents of gender segregation often use the argument that this is a reflection of Haredi culture and values that must be respected. Legal expert Dr. Gila Stopler demonstrated the fallacy of that argument, in that a culture that defies basic human liberty is not one that should be supported by the democratic state. MK Marina Solodkin was a bit more direct. “There is civilization, and then there is barbarity”, she said. “This is a black and white issue,” she added, expressing her frustration with liberal lawmakers who couch their disinterest in the language of multiculturalism. “The cause should be taken up by legislators on the left and the right, north and south, everywhere.”

The session was organized by the Knesset Lobby for Equality and Pluralism, chaired by MK Horowitz and MK Shlomo (Neguse) Molla, in collaboration with IRAC. Speakers representing the Center for Women’s Justice, Kolech and other organizations recounted personal stories of segregation and humiliation as well. The report offers a series of legislative and policy recommendations. Meanwhile, the High Court of Justice is set to issue a ruling on the legality of segregated buses within the next two weeks.

“The real heroes,” said Rosenberg-Shapira, “are the Haredim who shared their stories.” Maybe this meeting signals the beginning of concerted efforts at change.

In Israel, Attempts To Remove Women From the Public Sphere