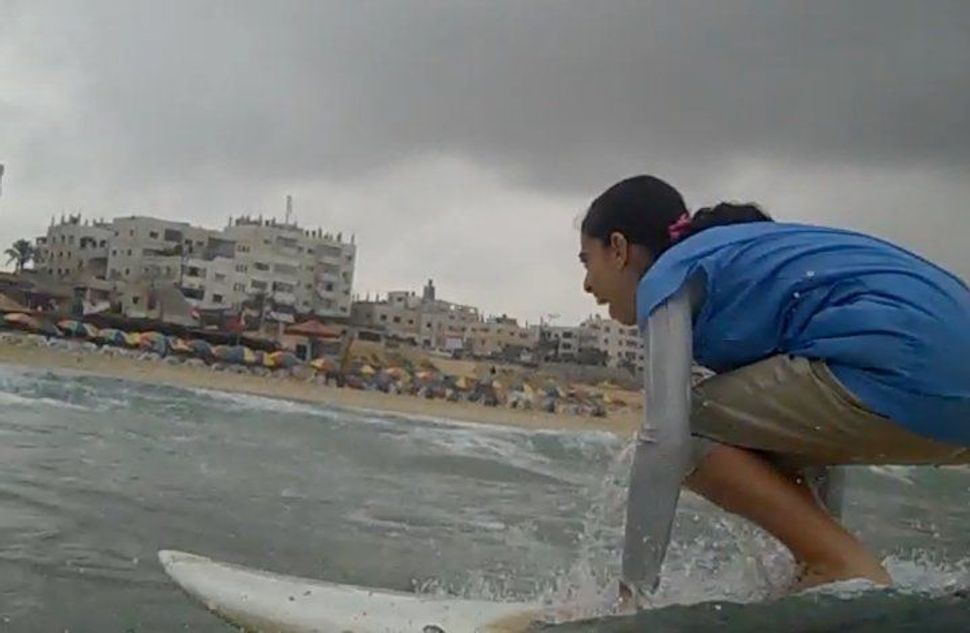 Rawan Abo Ghanem on her surfboard.

In Gaza, where it is illegal under Sharia law for women even to ride bicycles, four young girls are boldly learning to surf. With the help of the American non-profit organization, Explore Corps, they are riding the waves and gaining a measure of freedom, confidence and independence.

This past summer, Rawan Abo Ghanem, 12, and her sister Kholoud, 10, together with their cousins Shorouq, 12, and Sabah, 10, mastered the basics of surfing under the tutelage of Matthew Olsen, executive director of Explore Corps. The organization, which brings together educators, expeditionary leaders, international development and political consultants to promote outdoor education programs, was founded in 2007. According to Olsen, the non-profit runs primarily on volunteer power, and its tiny budget is covered by private donors from the United States and Europe.

Explore Corps, together with the Surfing 4 Peace initiative started by Jewish surfing legend Dorian “Doc” Paskowitz, Israeli surfing industry professional Arthur Rashkovan, Doc’s son David Paskowitz and surfing champion Kelly Slater, has been supporting and equipping the fledgling Gaza Surf Club. It was only last August, post-Flotilla incident, that most of the surfing equipment was allowed into Gaza by the Israeli authorities.

Olsen, who has lived off and on in Israel and Gaza since the 1990s, and has worked behind the scenes on Israeli-Palestinian negotiations with the Economic Cooperation Foundation, explained how much more difficult it is to empower the girls through surfing. He cited how unique it was for the Abo Ghanem girls to have been taken out into the water and taught to swim by their fathers. “They are in the water as much as the guys, which is very unusual in Gaza,” he said. It was not surprising then, to learn that their fathers and brothers are all lifeguards, and that they used to be fishermen before the fishing trade collapsed with the rise of Hamas to power.

Despite Olsen’s having heard about Rawan, Kholoud, Shorouq and Sabah for a couple of years, it was only last summer that they were allowed to meet with him. “It was really problematic for a man — especially a foreign one — to meet the girls and coach them,” Olsen recalled. “The girls were nervous about making spectacles of themselves, so we held our surfing lessons early in the morning when the beach was basically empty.”

The girls’ fathers and brothers were in the water with them, and Olsen took cues from the parents. “I’m delighted to help these girls, but you need to be culturally sensitive,” he emphasized.

He wonders what will happen once Rawan and Shorouq soon become teenagers. “Your life in Gaza changes drastically after you turn 13,” the coach pointed out. He’s not sure whether the girls will continue to surf, whether they will be willing or able to take the cultural risks.

For his part, Olsen would be thrilled if the girls would continue to surf. He says he would be willing to speak to the Gazan government on their behalf and impress upon it how letting the girls surf would help Hamas show open-mindedness, project capability and perhaps gain a measure of legitimacy. The only glitch in this plan is the fact that it is illegal for an American citizen to engage in any way with Hamas — even if it is just to give it some advice.

In the meantime, Olsen is keeping his hopes up that the girls will somehow continue to surf. In fact, he’s counting so much on their love of the sport that he has engaged a team of clothing designers in New York to create a special Islamic-appropriate swimwear, or “burquinis,” that can be manufactured in Gaza. The idea is to come up with something that covers the entire body but is not form fitting.