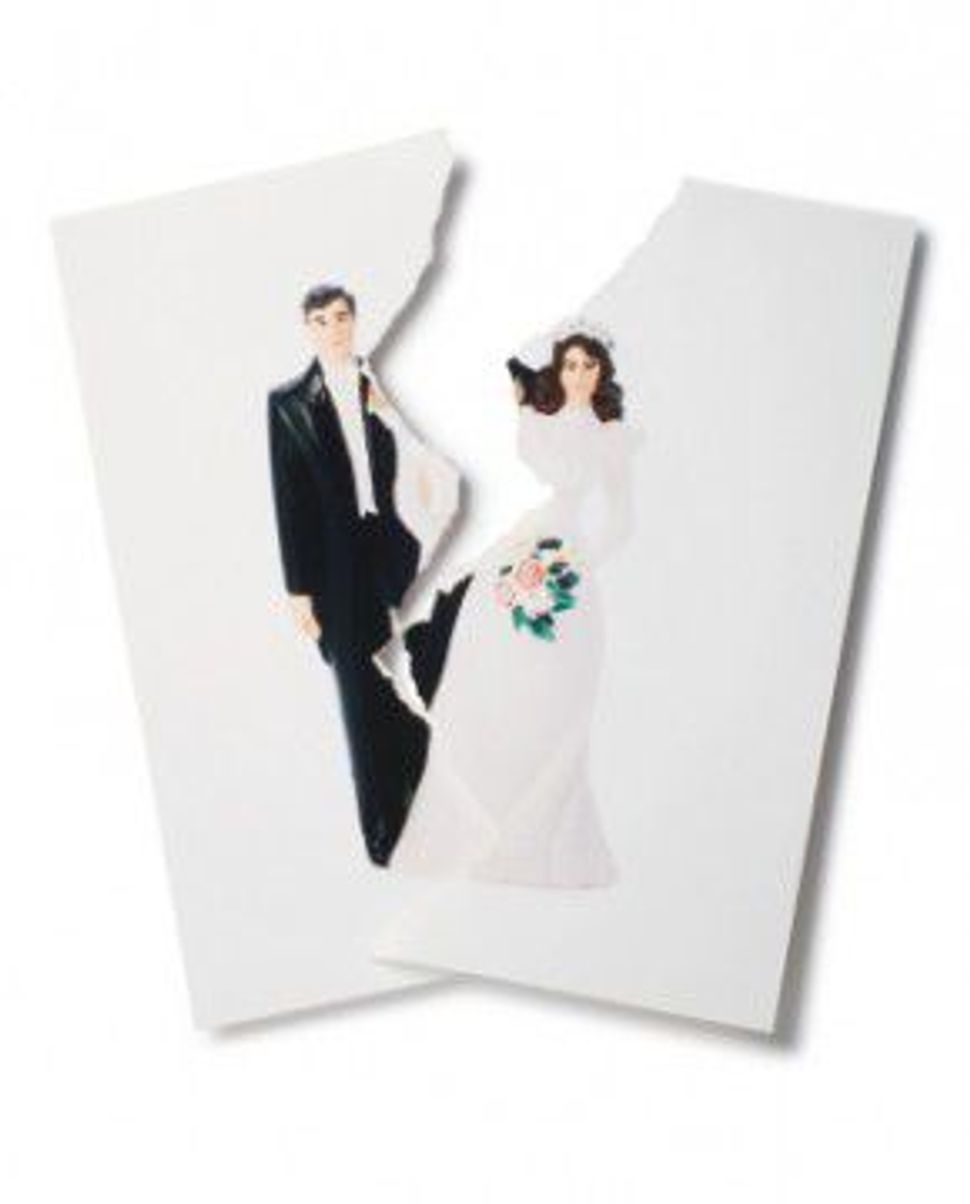 A man withholding a Jewish divorce — known as a get — is liable for money damages to his estranged wife, according to a recent decision handed down by a Tel Aviv appeals court.

The January 31 decision dismissing the husband’s effort to overturn a 700,000-shekel [about $188,000] lower court judgment against him for withholding the get offers hope to other wives chained to dead marriages, according to some agunah activists. Others who advocate for agunot say that the case will have no impact outside of Israel. An agunah is a woman who may not remarry because her estranged husband will not give her a divorce.

The couple at the center of the recent Israeli court decision lived together for just three months after their wedding, and the husband has refused to give his wife a get for all of the intervening 16 years since then.

The new appellate court decision means that, unless Israel’s Supreme Court overturns it, it will serve as a precedent in all family law there, according to the Center for Women’s Justice, the Israeli non-profit that has provided legal counsel to the wife since 2004. The Center was successful in framing the legal issue as a matter of damages for a violation of the wife’s human rights.

The woman standing before us has been held hostage by the appellant who has no valid reason for the prison that he made for her simply because she once agreed to marry him. The respondent had the right to a get from the moment she wanted one, and all the more so when she married the appellant at the age of 24, was with him for all of three months, and never knew any comfort from him. Today, almost 40 years old, she continues to suffer from his cruelty towards her. He prevents and prevented her from experiencing life’s joys, establishing a family, and especially from having children…. We are talking about immeasurable damage that increases by the day…. These actions are immoral and go against the Basic Law of Human Dignity and Freedom.

“This is the first time that an appellate-level court has confirmed a decision of Israeli Family Courts in which Jewish women who suffered from ‘get-abuse,’ trapped in marriages due to the husband’s refusal to give them a Jewish divorce (a “get”), were awarded tort damages as a result of their suffering,” said Susan Weiss, the Center’s founder and executive director, in a press release. “It is also our hope that this case will serve as an important precedent for women all over the world who take the position that religious laws cannot be exploited to abuse them, or used as an excuse to infringe on their basic rights to autonomy and freedom.”

Jewish law requires a divorce to be given by the husband and accepted by the wife. Though there were, of course, husbands in past generations who out of spite refused to give their wives a get, judges on Jewish courts then were more willing than they are today to invoke communal power to forcefully convince the men to move forward. And while there are Jewish religious divorces that go smoothly, withholding a get in order to extract money from the wife’s family or exert pressure on the woman to share custody or give up property has become commonplace. Despite Jewish Orthodox feminist innovator Blu Greenberg’s statement that “When there is rabbinic will, there is a halachic way,” the plight of “chained wives,” or agunot, has proved one of the most intractable of modern Jewish life.

Authorities on Orthodox Jewish law differ on the ways in which a man can be pressured into giving his estranged wife a Jewish divorce, if he can be pressured at all. Rabbi Michael Broyde in an article originally published in the Orthodox journal “Tradition,” wrote:

While halakha restricts the type of pressure that can be put on the husband in a variety of ways to insure that the requisite free will required by the husband for a valid Get be present, encouraging and pressuring a Jewish divorce in cases where the marriage is dead and the couple permanently separated is completely proper and appropriate even when there are no halakhic grounds for a Get to be mandatory or a mitsvah.

However, most Orthodox rabbis today are reluctant to exert pressure on a recalcitrant husband.

In online forums, advocates for *agunot” have been discussing how much of an impact the Tel Aviv court decision may have on efforts to free chained women outside of Israel, where civil courts are generally loathe to involve themselves in what they regard as purely religious matters. One lawyer based in Beverly Hills posted on the listserv “Get Link,” “I wish we could use that as precedent in the U.S., but not likely. Unfortunately I tried a very similar case in California in 1994, and lost because the court stated that it is a religious matter with which the California courts cannot be embroiled. I have recently discussed this with some of the current judges, and they all felt the same to be true today.”

A lawyer in England posted that she didn’t think it would be useful there, either. “We were advised that it would require a wealthy wife to pursue what was considered to be a remote possibility of claiming damages from her husband’s refusal to grant her the Get,” posted a member of the Family Law Group of the Board of Deputies of British Jews. Another “Get Link” poster suggested that since this precedent may not have much impact outside of Israel, women use the ultimate power at their disposal to fight the injustice suffered by agunot.

As much as it would be a great tool to light a fire under the tucheses of the rabbinate, it is not going to work … put pressure on the rabbinate. Cross your legs!