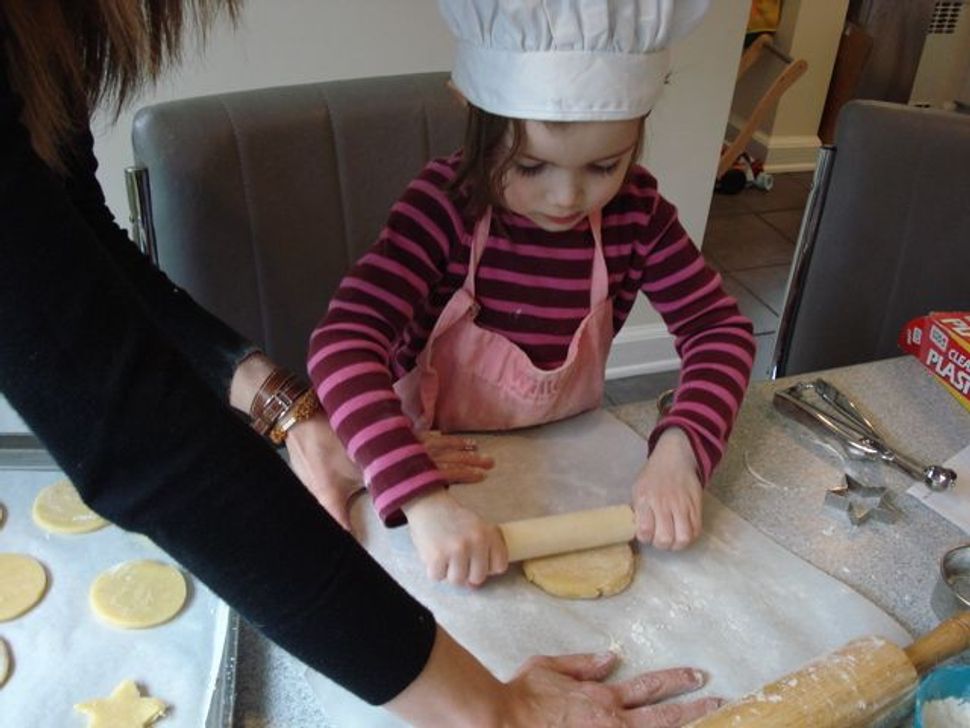 The oil from the Hanukkah donut-fry had barely cooled before talk of our hamantaschen bake-fest began. Baking is my way of expressing devotion, particularly as single woman in her mid-40s for whom being an aunt is the closest I will come to Jewish motherhood. Before my sister gave birth to the first of her two daughters six years ago, enduring the stories of my friends’ “adorable” nieces was torture. While feigning interest and donning a wan smile I couldn’t understand why they cared so much about their sibling’s kid.

Now that I am an aunt I have become one of those people I used to mock, telling tales of my nieces’ own adorableness and showing photos constantly. The girls have infused my life with a depth of feeling I still don’t comprehend, and I am determined to plant the baker’s seed in them both. When I was a child my mother would snap, “Food is not love!” whenever I’d complain about whatever she’d served for dinner. I disagree.

I learned to bake at the side of my neighbor Gert, and there wasn’t a more patient teacher. Gert and her husband Jack lived next door when I was growing up in the early 1970s on Central Park West. They were older than my parents, Orthodox and childless. Gert loved me unconditionally. I was her shayna punim (pretty face) In the warmth of her spotless, pink, kosher kitchen, where she somehow managed to fit two sets of everything despite its tiny dimensions, she guided my hands along the rolling pin, insuring our dough was smooth and even. Allowing me to cut out the circles we turned into three-cornered hats she always cheered, “Perfect!” even when they were far from it.

My parents were ambivalent Reform Jews. “Sweetie, is this the dinner with the apples and the honey?” my mother asked sheepishly around Rosh Hashanah, assuming I’d picked something up from the neighbors. If Mom was a caftan and fondue, Gert was a house dress and brisket. We had a Christmas tree at our place; but my siblings and I lit “Shabbos” candles across the hall where Gert, who was from Pittsburgh, pronounced “amen” as “o-main.”

After we made what seemed like 1,000 hamantaschen, Gert and I would carry them proudly to The Jewish Center for the annual Purim carnival. I sat with kids I didn’t know, swung my grogger around and shouted whenever Haman’s name was mentioned. It was joyous and raucous, but even more thrilling was to watch Gert’s fellow congregants feast on the apricot-, prune- and poppy seed-filled treats we had made together.

I’m embarrassed to say that after we moved across town my relationship with Gert began a slow, steady fade. As a self-absorbed teenager, I dreaded afternoons baking in what now felt like a stuffy, claustrophobic kitchen. Jack had died and Gert had become a hypochondriac. The apartment reeked of Ben-Gay, her complaining was constant, the radiators hissed and her sense of me was still as a child — asking after friends I no longer “played” with. She was stuck in 1971 and I had grown-up and moved on.

After college, living just blocks from our old building, I rediscovered the joys of creating with eggs, sugar, flour and, in my non-kosher kitchen, butter, and became a devoted baker. I often thought of Gert but did nothing. I was busy establishing a career, trying hard to make an adult life. Then a few years ago I saw her from afar at the supermarket. I’d just finished a run in the park on a gorgeous spring day and there she was, an old woman, wearing a heavy winter coat and lumbering through the store with the aid of a cane and orthopedic shoes. Guilt and sadness washed over me with such a force that I was too overwhelmed to approach her. I stood paralyzed, watching silently as she paid for her few purchases and disappeared into the crowd on Broadway. I vowed to call her. Tomorrow. Or maybe the day after. But something held me back. Did I resent the guilt? After all, we weren’t family. Really, she’d been an early childhood friend and how many of them were still in my life? Or was I too cowardly to face my own negligence?

And then over a cup of coffee and the Times I saw what I think I knew was coming. The Jewish Center placed the paid notice. She died in Maryland having been tended to by one of her devoted nieces. I was so relieved she wasn’t alone. But I was ashamed.

So I promised myself to honor her by keeping our tradition alive. I am probably the same age Gert was when she let me fold up the sides of our dough around the fillings. As I teach my nieces the joys of baking, the parallels are not lost on me. And sometimes they haunt me. I may not speak Yiddish, but the girls know they are my “pretty faces,” are loved unconditionally and anything they do in the kitchen is perfect. This year I’ll buy some groggers and tell the girls the story of Purim. And the story of Gert.

Miranda Levenstein mixes stories with recipes on her blog, In Sweet Treatment.