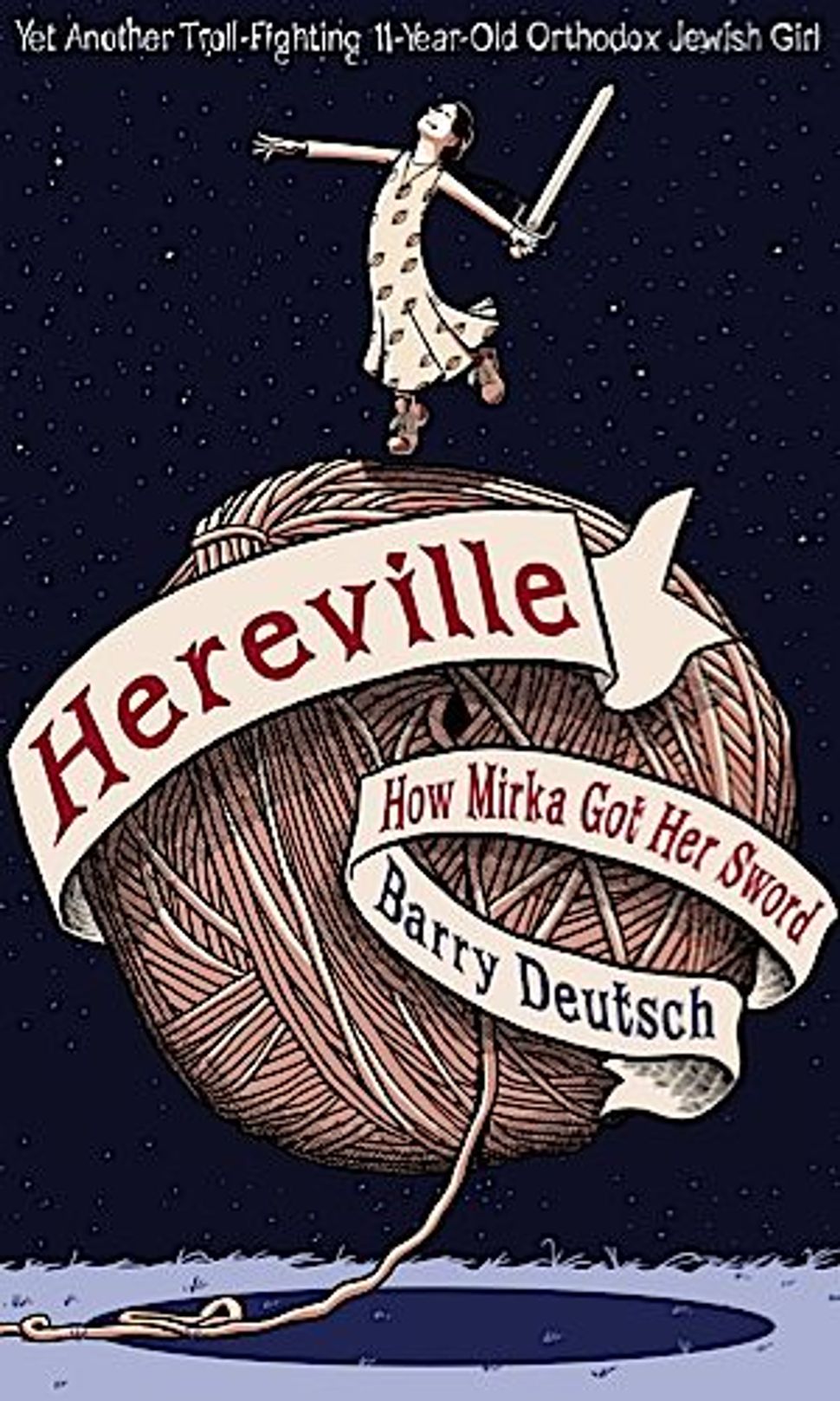 It’s not every day that a comic book heroine is an 11-year-old Orthodox Jewish girl. So when Rockerchick received the book “Hereville: How Mirka Got Her Sword” (2010, Amulet Books) as a birthday present, I took a look and was quickly entranced by the story of Mirka, a girl with a rebellious streak who lives in a place called Hereville.

Hereville, which the Forward first wrote about here, is also home to a bewitched giant pig and an evil troll (whom Mirka outsmarts with her Jewish-girl seichel). The setting exists somewhere between Anatevka and Boro Park. It is a place where families are close and siblings are irritating, where children sometimes encounter bullies on their way home from school, and where the tantalizing scent of baking challah lets everyone know that Shabbos is on its way.

The story is the creation of cartoonist Barry Deutsch, who lives in Portland, Ore., but is busy speaking at Jewish schools and comic shows across the country. He recently spoke with The Sisterhood about how a 41-year-old single, childless guy raised in a family in which ham was on the menu and synagogue was visited only on the High Holy Days, came to write about a young, frum heroine.

Debra Nussbaum Cohen: How did you come to write a story about an Orthodox girl?

Barry Deutsch: I’d read “Holy Days” about 15 years ago and then read a greater variety of stuff, including Stephanie Levine’s “Mystics, Mavericks and Merrymakers: An Intimate Journey Among Hasidic Girls.” I thought it would be a really interesting setting. I wanted a simple, fun fantasy comic, but I didn’t want to do another one about a muscular white guy punching another muscular white guy. I wanted to explore what it would be like to live an entirely different life. For me it’s not hard to imagine if my family had gone in a totally different direction a generation or two before I was born, and it seemed like an interesting area to research.

With no personal experience in the frum community, how did you manage to get the ideas and language right?

Originally Hereville was a webcomic and had many Orthodox readers who told me when I got something wrong, which benefited the book enormously. I started it thinking, honestly, that I’d build an audience on the web and self-publish some pages. In practice it went a lot faster than I expected. When I finished the first webcomic story, I did a little self-published comic book of it, and brought it to the Stumptown Comics Festival to sell the copies, stapled on the side. My table happened to be next to that of a much more famous comic book artist. His NYC agent stopped by and took a look at my book. A couple of days later I had an agent, and a few months after that I had a book deal.

Have you heard from Orthodox readers, and did any say they were offended?

Of course I was worried about offending someone’s sensibilities. How could you not? When I was writing the book I did my best to write it as respectfully as possible. That doesn’t mean I have to be worshipful, but I take seriously Mirka’s worldview. That she’s in this culture is never one of the things that’s funny. So far I have not heard from anyone at all who was offended by the book. I have heard a few times that Reform Jews worry that the book would be offensive.

But overall the responses I’ve gotten have been wonderful. I have not heard from anyone who’s currently Hasidic, because they aren’t likely to come across it. But I’ve heard a lot from Orthodox readers who are mostly thrilled, especially the ones with daughters, because they don’t have many comic books to offer their kids that show observant Jewish life. A lot of the books in that community are intended to improve the kid. “Hereville” is not at all trying to improve anyone. It’s just trying to be fun.

How did you decide that a giant pig would be featured as one of Mirka’s opponents?

I went through so many animals as the witch’s sidekick. I started with a cat, that was too cliché. Pig was the ultimate icon of being unkosher. It obviously seemed perfect if anything would be picking on Mirka through this book it would be a pig. I bought a herd of realistic plastic toy pigs. It was by far the hardest character to draw.

What’s next for Mirka? A “Hereville” movie? Action figures?

I doubt it very much. The movie studios are unlikely to be interested in doing a movie about an Orthodox Jewish girl. If someone wanted to make a movie I would wish them luck and buy tickets when it came out, but wouldn’t want to be involved in making it. I would love a Mirka action figure. You can get those produced on a small scale, so maybe that will happen someday.

Abrams has signed a contract for two sequels. They must be pleased with how things are going. The working title for the next book is “Hereville: How Mirka Ruined Her Sister’s Wedding.”

Ideally I’d love it if in the end there were 10 Hereville books, and we got to see Mirka become a young woman. Many of the barriers she’s ignoring at this point in her life will become much more pertinent when she gets to be 17 or 18. That’s one reason I wanted to have a few important girl characters. With multiple girls I can show multiple ways of going through girlhood and show that there are things that are valuable in all of their perspectives.