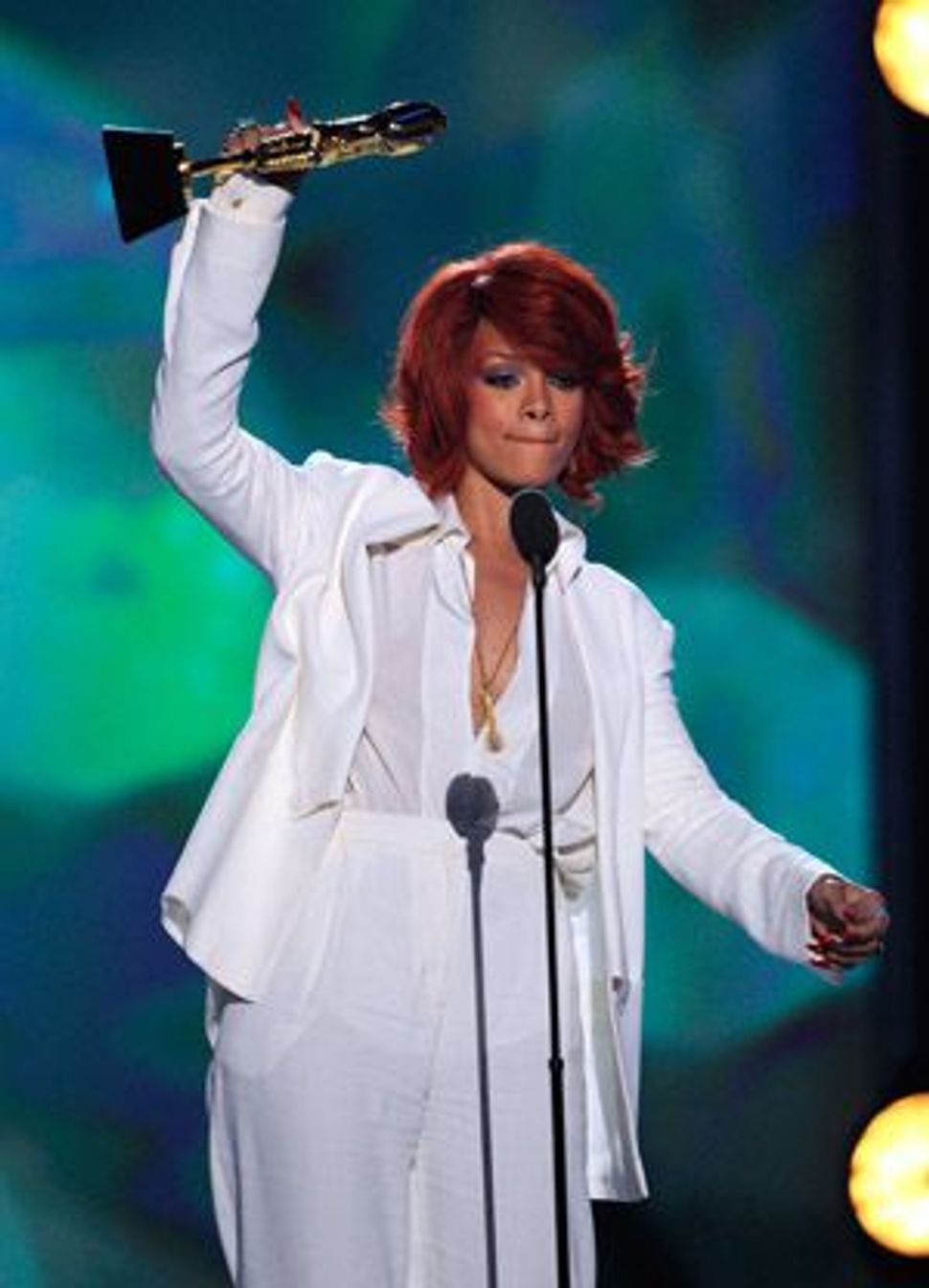 Rihanna accepting a Billboard Music Award in May. Image by Getty Images

Rihanna has finally stood up to abuse. Well, maybe not in real life, but certainly in her art — and in a somewhat disturbing way. The pop star’s latest release, “Man Down,” depicts Rihanna shooting a man in cold blood. Only towards the end of the video does the story unfold about the man sexually assaulting her the day before.

Parents groups are upset. The Parents Television Council called the clip “disturbing,” and asked BET to stop airing it. Rihanna has responded that the song is important to her because it constitutes “a voice for so many that aren’t heard” — that is, victims of sexual violence.

Coming from Rihanna, this is a particularly powerful message. She has a history of being battered by her then-boyfriend Chris Brown, whom she initially returned to despite the violence, until finally breaking up with him. Moreover, her hit song “Russian Roulette,” which I analyzed here, presents a profoundly disempowering messages to victims, advocating the stance of passively, of standing still and waiting to die while one’s boyfriend holds a gun.

This video, then, has taken Rihanna to the opposite extreme, in which a woman walks away from an attack and then returns the next day to carry out a form of vigilante justice in pure violence.

I’m really glad that Rihanna has changed her outlook and found her own empowerment. I’m guessing that she received some counseling — in addition to public criticism — between “Russian Roulette” and “Man Down.” I just wish she hadn’t taken her empowerment to such a wild degree. The answer to violence should not be violence. A gun is not the only option for abused women.

Still, it’s not hard to understand the sentiment. Considering that social services and law enforcement officials are not always successful at protecting women — 18 women were killed in Israel last year by their partners; as of last week, an Israeli man stands accused of stabbing his ex-wife and killing her boyfriend in the presence of a police officer who was supposed to protect her — abused women may be justified in thinking that they are their own best defenders. (Currently, in both the U.S. and Israel, abused women who kill their husbands are, in most cases, not able to plead self-defense unless they were under attack at the moment of the murder —though some victims’ groups want to see the laws take prolonged abuse into account.)

Rihanna says she wants to speak for victims, but I’m not sure that this is really the best message. But clearly she’s evolving, and looking for ways to come to terms with her own history of abuse. And that’s a really important part of the healing process, too.