At Tournament, Naama Shafir Wears Observance on Her Sleeves 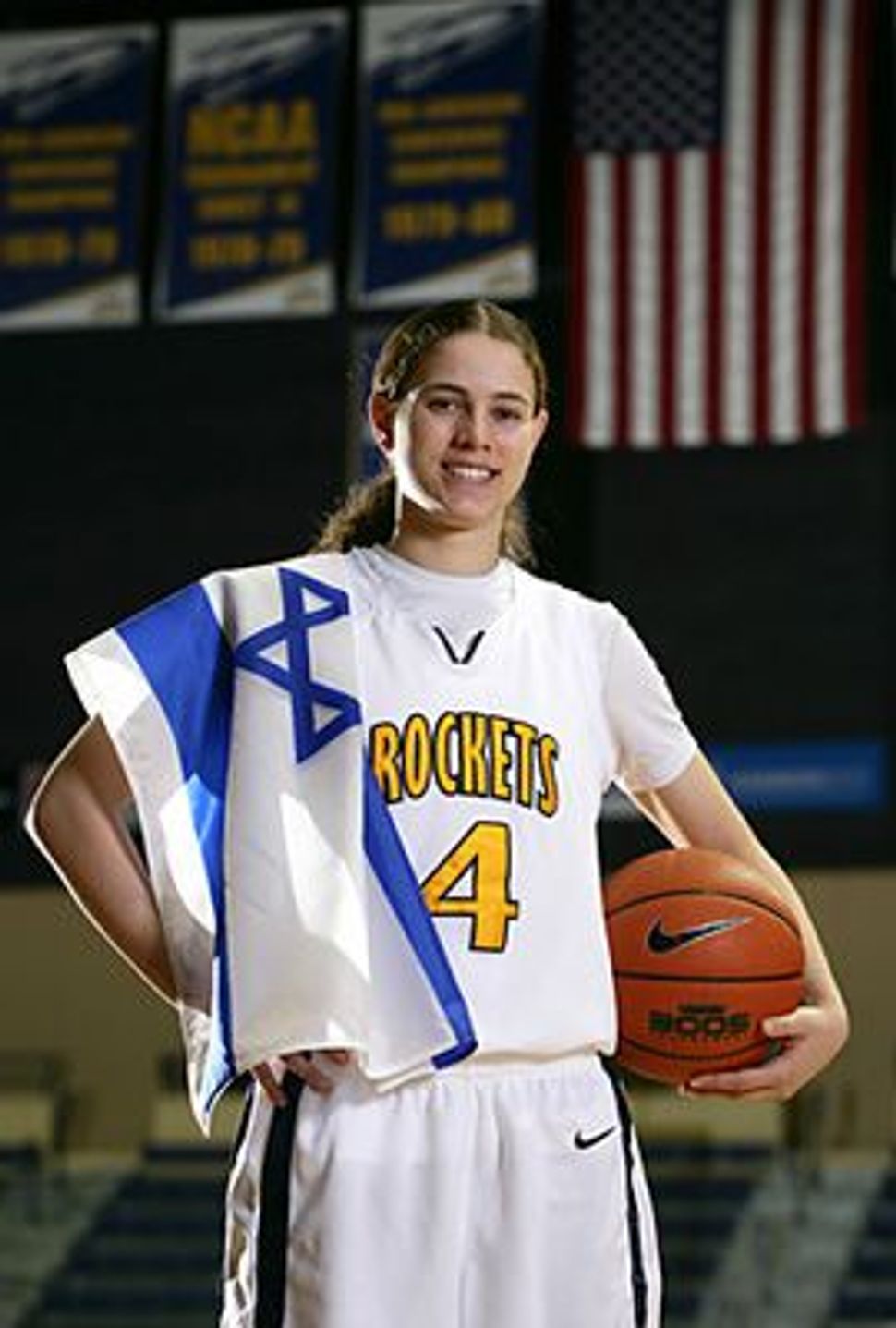 For several weeks, it appeared that Naama Shafir’s shoulders would stand between her and an opportunity to play basketball on an international level as part of Israel’s national team. But in the end, she was able to take to the court.

Shafir, the Orthodox Israeli basketball star whom the Forward profiled here, has overcome numerous challenges in making the most of her athletic talent without sacrificing her religious observance. But after the young player has managed to accommodate the Sabbath and kashrut laws at the University of Toledo for nearly three years, she ran into trouble in Europe because of her unwillingness to take off her T-shirt.

In her career as a U.S. college player, it hasn’t bothered officials that Shafir wears a T-shirt underneath her sleeveless jersey, covering her shoulders in order to maintain her personal level of modesty. But playing as a member of the Israeli national team, she was told that international basketball regulations require uniforms to be uniform.

So if she didn’t bare her shoulders, she wouldn’t be allowed onto the court at the tournament, which began over the weekend. With Shafir declaring she will not compromise her religious beliefs and play ball with bare shoulders, it seemed the situation was at an impasse and Shafir would sit on the sidelines.

But then, at the last minute, a compromise was reached. FIBA agreed to permit Shafir to play if her uniform had “skin-toned elastic sleeves.” Interviewed on television after the first game in the tournament on Saturday night, Shafir confessed that the uniform, with the nude-colored nylon and spandex sleeves extending to the wrist wasn’t the most comfortable, but that she was willing to do whatever it would take to be able to play in the tournament, which ends today.

The controversy shone a spotlight on a young player who is a celebrity in Toledo, Ohio, where she is considered a superstar, after leading the University of Toledo Lady Rockets to a national victory by scoring 40 points in the 2011 Women’s National Invitational Tournament title game, after which she was named MVP.

Shafir came to Ohio from a small town of 350 families, Hoshaya, Israel, a half hour north of Nazareth, where she is one of nine children. Her coach and teammates made adjustments that were made to accommodate Shafir’s observance of Shabbat and kashrut. As our Elana Sztokman wrote in her Forward profile of Shafir:

In Toledo, the entire basketball program adapted its practices to accommodate Shafir’s religious needs. There are no practices on the Sabbath, and whenever there is an away game, the team travels together on a Friday, before sundown. To mitigate religious concern regarding modesty Shafir also wears a T-shirt under her sleeveless jersey. The team stocks a storage freezer in a nearby eatery with kosher meals.

With their dramatic victory this year, it is clear that their open-mindedness paid off. It’s ironic that after she managed to so smoothly adapt to American college play and find such acceptance of her differences, that she ran into trouble representing her own country. Presumably in European sports, officials feel they have to toe a strict line when it comes to religious garb — and worry that if today a female player is permitted to wear a T-shirt, tomorrow, women will take to the boards wearing a hijab.

At Tournament, Naama Shafir Wears Observance on Her Sleeves