Why I Spent Yom Kippur at Steve Jobs’ House 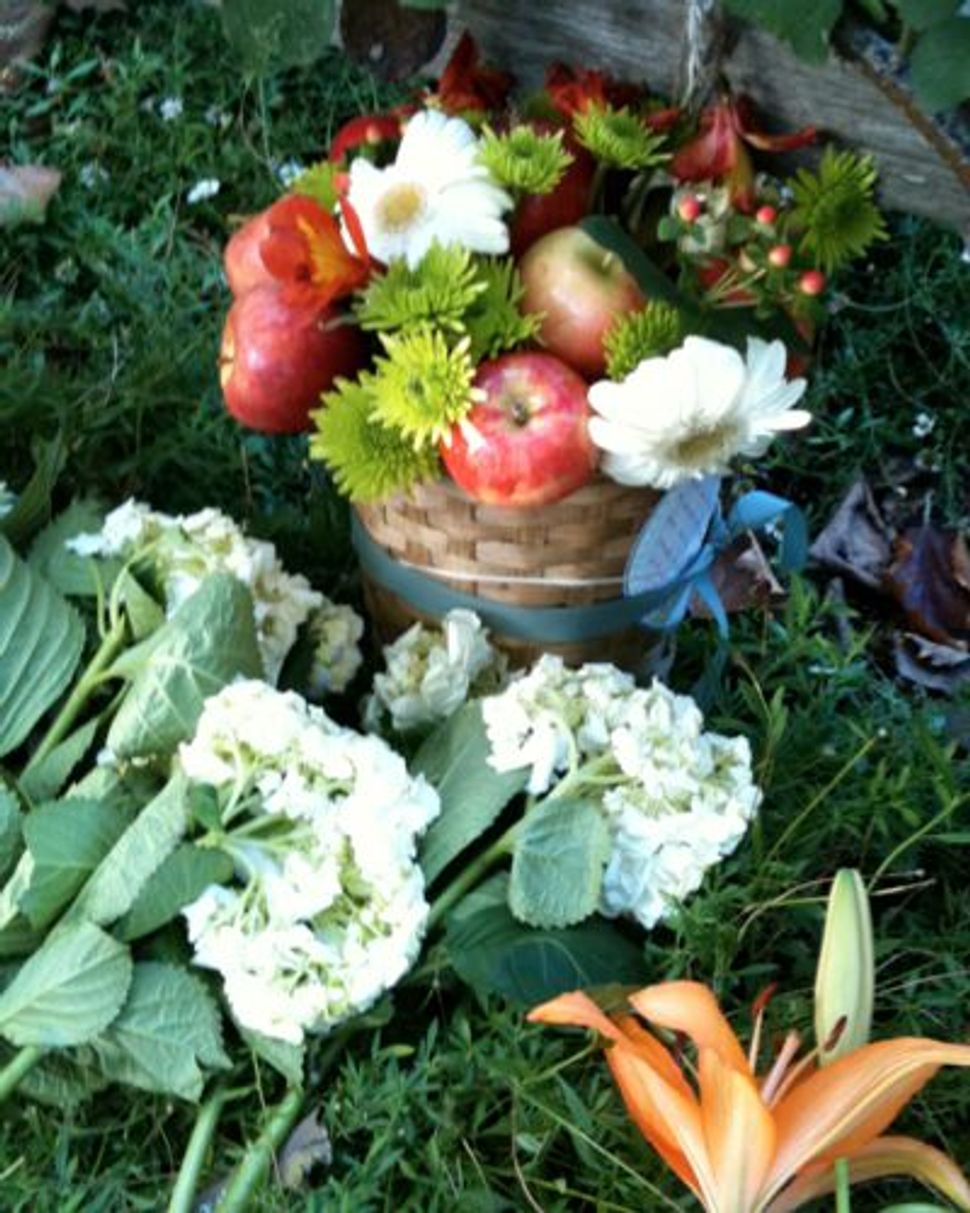 Some of the offerings left in front of Steve Jobs? house. Image by courtesy Renee Ghert-Zand

I didn’t go to synagogue for Yom Kippur’s concluding services on Saturday afternoon. Instead, I went to Steve Jobs’ house.

I got out of my skirt, put on some sweatpants and biked over to his house, just a few blocks away from mine in Palo Alto, California. There, I joined the crowd that had come to pay their respects to the late technology visionary who birthed and led Apple.

It was strange to see his familiar house, with its rustic brick walls and low-hanging slate roof reminiscent of the Elizabethan-era countryside, turned into a memorial. A corner which I had passed so many times on foot, on bike and by car, was now filled with flower bouquets, cards, posters and other personal offerings like sweatshirts with the Apple logo and used iPods inscribed in Sharpie marker with words of thanks to Jobs. Most poignant were the many apples with bites taken out of them lined up on the low wooden fence surrounding the small apple orchard that stands in front of the house.

A night earlier, in her Kol Nidrei sermon, my congregation’s rabbi quoted – as I imagine many other rabbis around the country also did — part of Jobs’ 2005 Stanford commencement address. My rabbi spoke about how Yom Kippur is, in essence, practice for death. It is an annual wake-up call to live our lives as fully and as well as we can in the limited time we have in this world. Jobs, in his untimely death and in the way he lived his life, is a powerful example of what the rabbi was talking about.

But that is not why I went to Jobs’ house on Yom Kippur. I went there more in relation to the upcoming holiday of Sukkot, the Jewish Thanksgiving, as it were. I was there to offer not only condolences, but to also show gratitude to Jobs for having made my job as a mother easier during a difficult time. This was so even though I never met Jobs in person, and I am certain that he never even knew I was his neighbor.

When we moved to Palo Alto very unexpectedly six years ago after two years of planning to go to Israel fell through at the very last minute, I was racked with guilt over having suddenly uprooted our three boys from New York. I beat myself up about putting them in large public schools here after they had been in a small, nurturing Jewish day school in Manhattan. I was miserable about no longer being in New York, and I knew that this was affecting my family’s adjustment to our new life here.

The fact that Steve Jobs was a neighbor made the transition a little bit easier. Our boys, who – having caught the Apple bug from their father — had long been Jobs fans. Even before arriving in Silicon Valley, the guy in the jeans and black mock turtleneck who implored us to “think different” enjoyed rock star status in our home.

Every phone call to friends or family back East included excited mention that “Steve Jobs lives just down the street from us!” and Jobs sightings were a regular part of our dinner conversation during that first difficult year. We occasionally saw him out walking his dog, driving his car or shopping at Whole Foods. We admittedly purposely went by his house hoping for a glimpse of him sitting opposite a huge iMac in his corner study overlooking the apple trees. Halloween trick or treating at the Jobs’ elaborately and spookily decorated house has been an annual highlight since coming to Palo Alto.

Wanting to leave something in front of Jobs’ house myself, I instinctively looked around for a stone to leave on the fence. But then I caught myself. I was not at a grave in which Jobs lay in death, but rather at the home in which he had lived. My sign of remembrance and thanks will reside not in physical space, but in my memory of a time in which he, by his existence and example, made me it easier for me to begin to think different about living in a new place and moving on with my life — for my sake, and even more so for that of my family.

Why I Spent Yom Kippur at Steve Jobs’ House