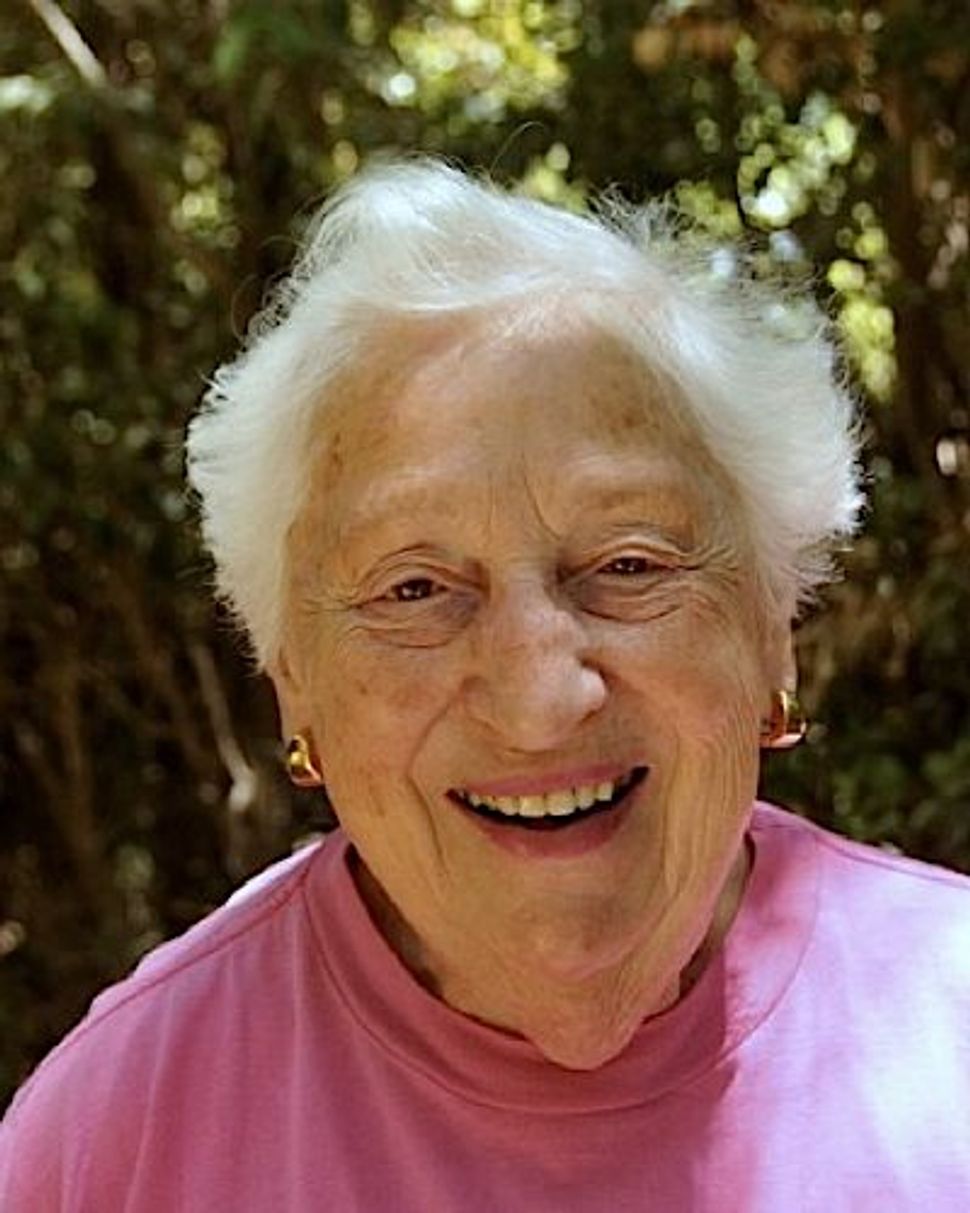 Alice Shalvi, 85, is one of Israeli feminism’s founding mothers. She has been a Hebrew University faculty member, head of the modern Orthodox girl’s school Pelech, co-founder of the Israel Women’s Network, and recipient of dozens of awards and honorary degrees. In 2007, she was awarded the prestigious Israel Prize for lifetime achievement and contributions to Israeli society.

On Nov. 2nd, she will be honored by The New Israel Fund in New York. Shalvi’s “life work towards a more just, equal and pluralistic Israel is … the embodiment of that vision in her work as a leader in social activism,” said Bruce Temkin, the NIF’s New York director.

Shalvi was raised in England after her family fled Hitler’s Germany, where she was born. She made aliyah in 1949 and soon met Moshe Shalvi (then Shelkowitz). They live in Jerusalem, have been married for 61 years and have six children, 21 grandchildren and four great-grandchildren. While visiting New York before being honored, Shalvi spoke with The Sisterhood.

Alice Shalvi: As far as women go, there is a very interesting situation now. We now have three women leading parties, Tzipi Livni of Kadima and Shelly Yachimovich of Labor, and Zahava Gal-On of Meretz, and it’s totally unprecedented in Israel. There is also a very significant role women are playing in civil life. During the social protest movements, when two women were prominent leaders, Stav Shaffir and Daphne Leef. They are very, very impressive. Daphne has become a sort of household figure. People know her and she’s a brilliant speaker.

The other thing is that a very large number, about half, of third-sector [non-profit] organizations, such as those NIF supports, are headed by women CEOs. That of course includes some which are all-women organizations, but not only. I see this as very interesting because it hasn’t yet really affected mainstream politics.

I don’t know how women will do the next election in two years. Of course, we have more women in the Knesset than ever before, 22, which is unprecedented. But apart from Gal-On, I’d bet that none of them would identify themselves as feminists, and not much is going on as far as women’s rights and women’s status. If I compare it with the enormous spurt of legislation during the 1992-96 era, when Naomi Chazan and Yael Dayan were in the Knesset, there were only 12 women there but they passed over 40 new laws or amendments dealing with the status of women. That’s an indication that it’s not the numbers that count. It’s the commitment of even a few who can make a difference. At the moment none would see women’s issues as a priority, aside from Gal-On.

Because women have attained more rights. Top priority now is not social issues at all, and that’s part of the problem. The major issue now is the territories and peace and the Palestinians, and there is a large ultra-Orthodox sector. They are hindering, even undoing what was already done.

The Haredi influence in society as a whole means they take liberties. They defy the Supreme Court decisions on separate busing. No political party can afford to offend the Haredim because it means they back out of a government and the government falls. That has a serious effect on women.

My daughter Pnina (Shalvi) works for Kupat Cholim Klalit (Israel’s major HMO) in graphics and advertising. You cannot show a girl or women in any of their publicity, on pamphlets or banners. So you see fathers and sons only, even for pregnancy services!

Obviously I think it’s appalling. It’s a tremendous step backwards. It puts us in the same camp as some of the Arab countries. Some of the Orthodox women are clad in burkas. It’s horrible, absolutely terrible.

Has it affected you personally?

I go every year to buy stationary with my grandchildren when school starts. I saw one of these (Lev Tahor) women in the mall. I thought she was Arab, and my daughter said, “Ima, they’re not Arabs, they’re Jewish women.” That a Jewish woman would even think of this as something to do, it’s not something I can understand.

So many people are leaving Jerusalem now and it’s very distressing. These are people who provide a strong cultural presence in the city. There is encroachment on the part of the Haredim, who constantly grow in population and are not working.

Our electoral system needs to be reformed. The people in power aren’t going to do the reforming. We should be electing individuals and not voting for a party list. When you vote here you haven’t a clue as to who most of the candidates are on the list. That’s not democracy.

Short of that, what do you think ought to happen?

Education. In Jerusalem only 26% of children are going to regular state or state-religious schools. The rest are in Haredi independent schools where they refuse to teach regular subjects. They are simply refusing to teach that core syllabus, which includes Hebrew, a foreign language, mathematics and Jewish history.

I don’t know what’s going to happen. I’m sad about it because Jerusalem has blossomed in many ways. We have a wonderful theater, the Jerusalem symphony, excellent cinema, masses of chamber music, lectures. But it’s getting harder in Jerusalem. The city is not well kept. It’s dirty, it’s neglected. And it’s sad that because of personal pressure people are leaving.

One couple I know had a terrible experience. They lived in their family house, theirs since before the establishment of the state, and with great hesitation wife agreed to visit Germany where the husband is from. When they came back they found a note on their door saying ‘get out,’ because they are secular. To come back from Germany and find that on your front door. It was terrible.

Do you see any positive developments for women in Jerusalem?

The modern Orthodox feminist community has taken off. Now there are a lot of very well educated, Jewishly knowledgeable Orthodox women. As I always said, knowledge is power. When they say ‘we should have a role to play,’ they know how to play it. That there is now such good Torah education available for Orthodox women is what’s making a change.