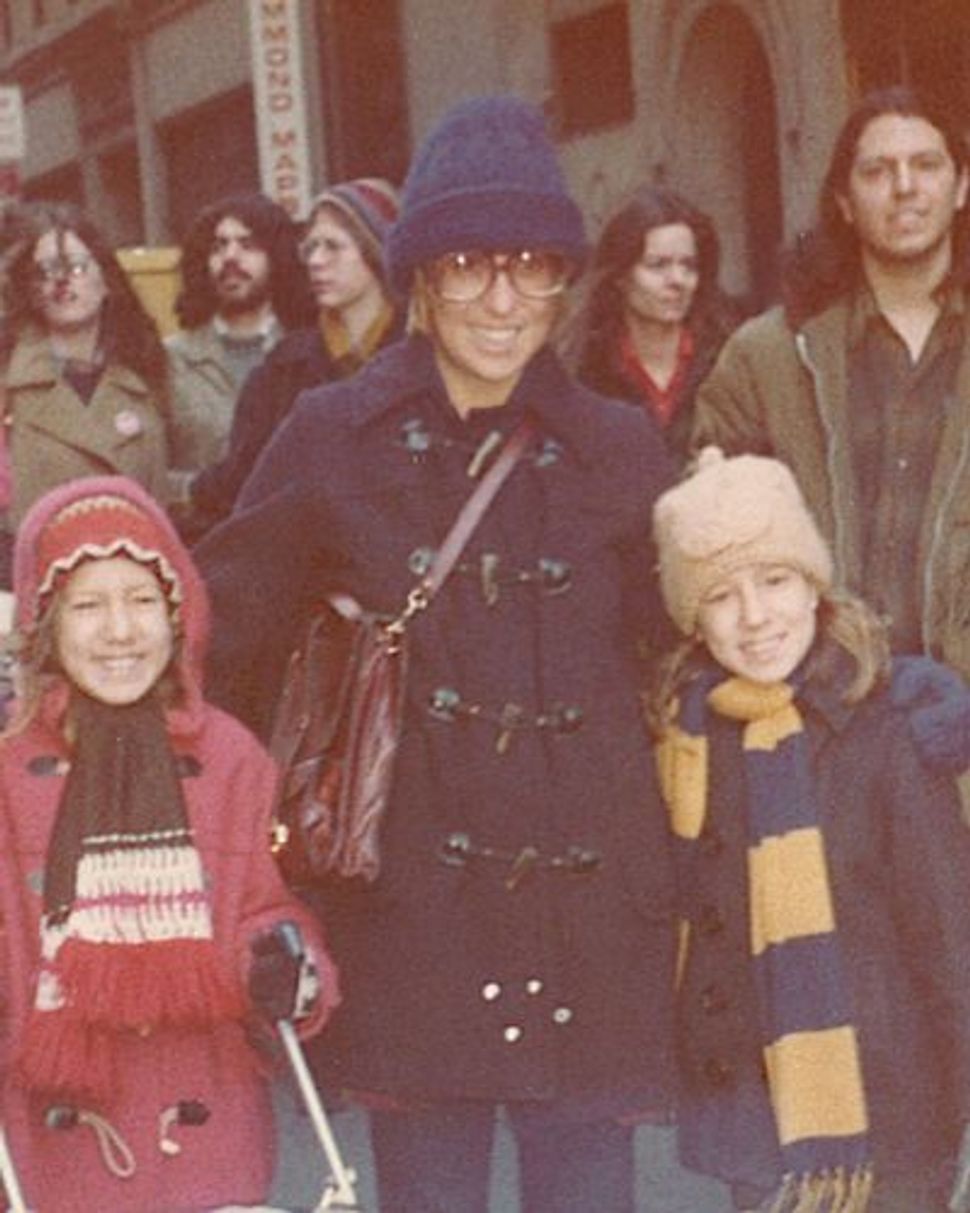 New York Magazine’s cover story this week is an oral history of Ms. Magazine in honor of the 40th anniversary of its first issue. The article is written by journalist Abigail Pogrebin, the 46-year-old daughter of Letty Cottin Pogrebin, one of the founding editors of the magazine, which was the first exclusively written and published by women for women. Through her extensive research and interviews of both supporters and critics of the magazine, Pogrebin brings the momentous early days, months and years of the history-changing publication to life. One of the people she was unable to interview was Miriam Wosk, the artist who designed the inaugural issue’s cover, and died last year from breast cancer.

Renee Ghert-Zand: How many people did you interview for the oral history and who were they?

Abigail Pogrebin: I interviewed 35 to 40 people. It was anyone who was involved with Ms. over the 40 years, primarily in the first decade and really focusing on the first five years…I pretty much interviewed every living major participant in Ms., save a very few. Every interview was done individually by phone or in person, or both, and some by email. These are the major players, the people whose names come up over and over again. Since I grew up around Ms., I remember many of them.

When did you become aware of your mother’s leading role in the women’s movement and with Ms. Magazine?

Feminism was in the water as I was growing up. Politics were talked about at the dining room table. I do remember being shlepped to marches. It wasn’t onerous; I remember it being exciting to be there. I didn’t have a sense of what was at stake, but I had a sense that there was a battle being fought.

As to the extent that I was aware of sexism or feminism, I would say that I did not experience it much first hand as I was growing up. It’s probably because the world changed with my maturity and I rode the coattails of what these women accomplished. So I never had the sense of boundaries. As a kid, I was not aware at all of the limitations on women and their futures. What I was aware of was that my mother was doing work that ultimately was affecting the world —I just didn’t know in what way.

I do remember going to the Ms. offices and what it was like to go by Gloria’s (Steinem) desk, and see Suzanne Levine and Pat Carbine and say hello and feel really proud my mother was working with these women. I knew even as a kid, that Gloria, especially, was a big deal.

What revelations from the interviews were most surprising or illuminating?

One of the revelations to me was just realizing that sexism was so overt, so unapologetic, so not-taboo at the time. There was a very naked kind of anger that women would want the things they were wanting, or were wanting more than they had.

You couldn’t get a credit card without your father’s or husband’s signature. The idea that things like rape crisis center, or date rape or sexual harassment were not even in the vocabulary. I really had forgotten that these things predated Ms. Magazine.

Do you think young women and girls today have any connection to or appreciation for what Ms. Magazine has stood for and accomplished?

Absolutely not. I would be surprised if the majority of the people reading this [the New York Magazine article] didn’t feel it was wholly new to them — the way it unfolded, how seismic and groundbreaking it was.

My generation and certainly my daughter’s are growing up with it as a given. That’s not to say that everything is easy and simple, uncomplicated and unchallenging now. I really don’t feel like we’re living in a sexist moment. I was certainly raised with the sense that everything was possible, and it was up to me to seize every opportunity, that nothing would be in my way other than myself. With my mother’s generation, everything was in the way. In terms of feminist political dialogue, I don’t hear it in my cohort today.

So, what then is the enduring legacy of Ms. Magazine?

The enduring legacy is that we’ve forgotten the hurdles. It’s not only that we now believe that anything is possible, it’s that we think we are entitled to it. That is an enormous achievement. The fact that we are nonchalant about equality, the fact that men are more feminist now. Men may not call themselves that, but that’s the way the world is now.

Do you discern any unique role played by the Jewish identity and background of the considerable number of Jews among Ms. Magazine’s founders?

I think that because Jews played the role that they did in the civil rights movement, I feel that there is a kind of unquestioned integration of Jewish social justice, social activism in any major movement. I’m aware, in a way, of who the Jews are on the masthead of Ms., because I’m a Jew. But I would not say in any way that this is a Jewish magazine. It’s notable that it’s a very mixed group in term of religion at the start of Ms. This obviously reflects social justice at its best, because it brings everyone to the table. For the Jews, it was partly driven by a sense of justice, of what’s right and wrong — absolutely. But I wouldn’t parse it out as a specific issue.