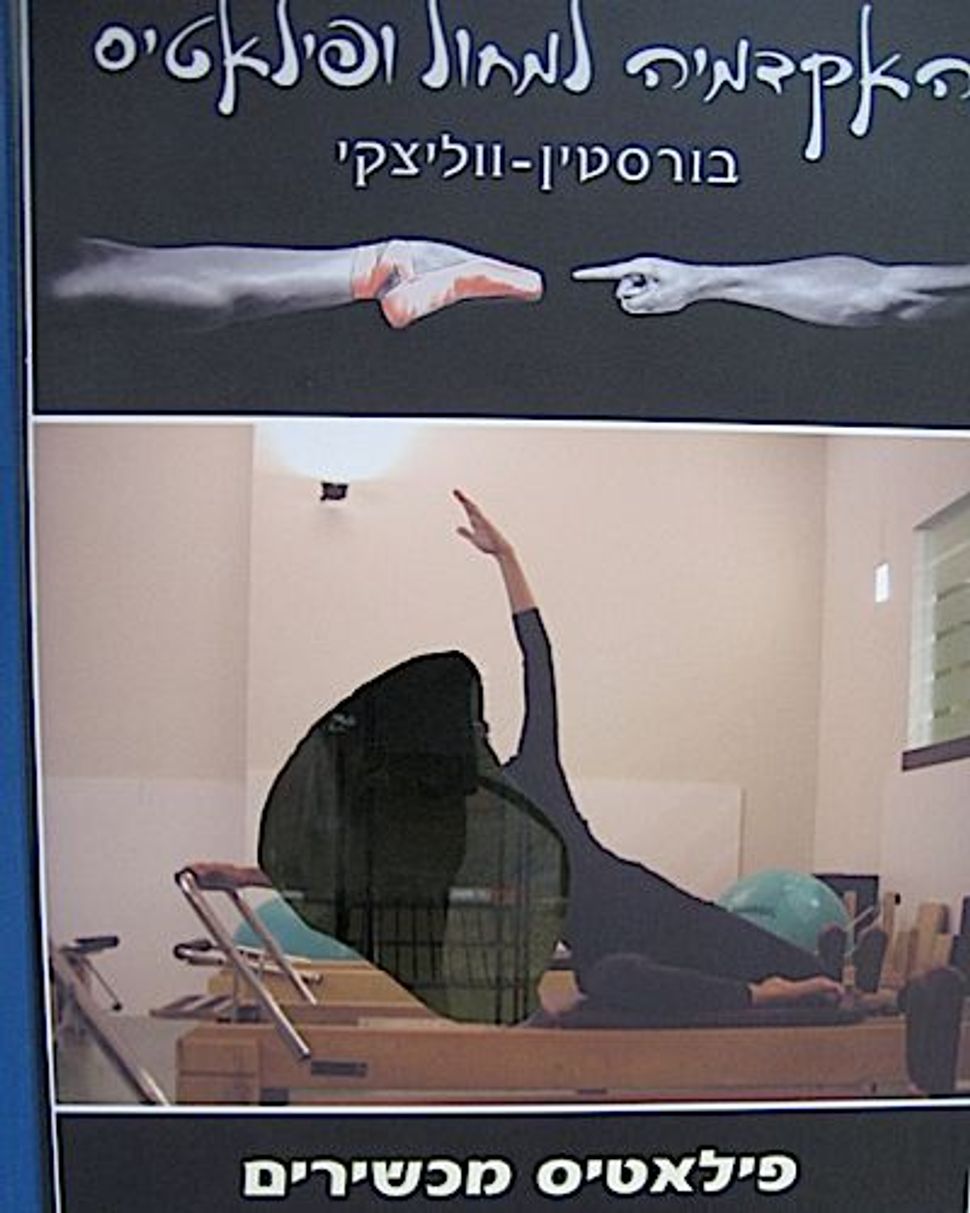 True confession time. Even as I have been writing here at The Sisterhood regularly about the struggles of women in places like Jerusalem and Beit Shemesh, with their issues of gender segregation and the disappearance of their images from public space, personally I have felt pretty far removed from the situation.

The town where I live, Ra’anana, feels like something of an oasis from the religious-secular tug of war that happens in other Israeli communities. We have an unusual demographic make up. Our small city has a solid non-Orthodox majority, with a substantial minority of Orthodox Jewish families, estimated at about 25 percent, nearly all “national religious,” or modern Orthodox. Haredim in Ra’anana, though they exist, are few and far between. The town is a magnet for immigrants from Western countries: South Africa, the U.S., Canada, France, England, Argentina are only the biggest sources. We have Orthodox and non-Orthodox residents from nearly every country in Europe and South America. As a result, our Orthodox population tends to be tolerant of their less observant neighbors, and the non-Orthodox population is extremely respectful of those who observe mitzvot. With many Orthodox women from abroad in jeans and uncovered hair, you can’t always tell who is who. We also have a critical mass of residents who identify as Conservative and Reform Jews, also uncommon in Israel. In short, Ra’anana is about mixed and as ‘live and let live’ as predominately Jewish cities in Israel go.

I’ve always felt that the local spirit was embodied nicely in the building where I take Pilates classes. The three-story building has storefronts on the ground floor, and the side entrance leads to the stairwell. Upstairs, there is a large Chabad center where prayer and study takes place. Downstairs, is a dance studio, where a different kind of learning happens: girls and women — Orthodox and non-Orthodox — learn ballet, jazz, hip-hop and take Pilates classes. That the men heading to study Torah at Chabad and girls in leotards and dance gear could amicably share space, to me illustrated the harmony in the community.

Then the battle of the signs began. For years, the windows surrounding the entrance of the door were dominated by posters of the Lubavitcher Rebbe, and signs advertising seasonal Chabad events. There were never any posters for the dance studio. In an effort to publicize the Pilates classes, about a year and a half ago, the dance studio put up a poster featuring a picture of my teacher, Elior, on Pilates apparatus. In the picture, she was wearing a sleeveless top and leggings, and was doing an exercise lying on the apparatus, with one of her legs raised – a comm. When I saw it, I gulped. I had a feeling that a picture like that could become a problem with Chabad. I asked Elior about it and she said that she had been asked if she would pose in longer sleeves and she had refused — she said she wasn’t going to cover herself up any more than she did in a regular Pilates lesson. Then my fears were realized. The poster was anonymously torn down pretty quickly. A few weeks ago, the studio tried again. This time, there was a clear attempt to make the Pilates photograph as inoffensive as possible. The model wore a high-necked long-sleeved black leotard, and her pose was discreet — legs together, one of them bent. The studio couldn’t have done much more to make it acceptable to their neighbors. Yet within days the poster was defaced — torn, so that her head and neck were removed. Beheaded, like the poster that was changed in Jerusalem. Interesting, that it is the face, not the body, that seems to be the target of the defacement – it’s not a woman’s torso that arouses, but her eyes and her mouth.

Even more than the fact of the defacement itself, what bothers me is that the defaced sign — opposite the benevolent gaze of the undisturbed Lubavitcher rebbe – has been in place for weeks and it doesn’t seem to bother anybody. I haven’t seen it discussed among friends, or noted in the local press or online forums. It’s still there. And serves as a reminder to me that no community is immune from this phenomenon, not even mine.

Too bad the dance and Pilates studio is in the basement. Otherwise, a great response to the sign defacement would be to open its windows as one Jerusalem dance company has just done. The Kolben Dance Group is opening its rehearsals to the streets in the Nahlaot neighborhood, as part of the protests against the exclusion of women from public spaces in the capital.

Large picture windows were installed in the hall facing the street during renovations a few years ago. However, shortly thereafter, reportedly under pressure from the Jerusalem municipality and ultra-Orthodox residents who also threatened the company’s members, it was decided to keep the curtains closed.

The company’s advertisements, which show female dancers, have also been vandalized. As a result, the advertisements have had to be without human figures….The curtains are to be opened Sunday in a festive event in cooperation with Yerushalmim, the movement leading the protest against the exclusion of women in the capital.