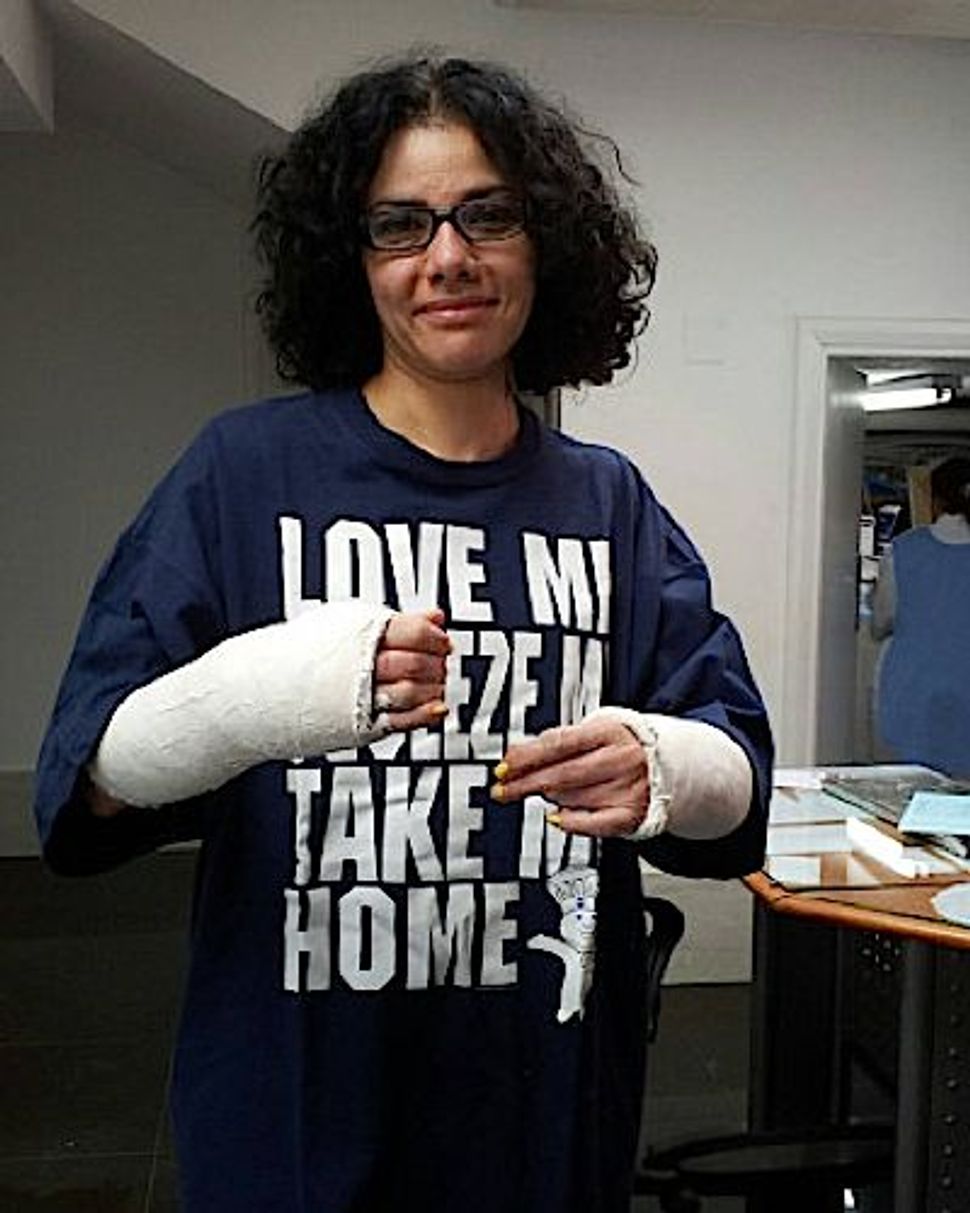 Mona Eltahawy in the hospital. Image by courtesy mona eltahawy

American-Egyptian journalist Mona Eltahawy has been freed after being beaten, arrested and interrogated by security forces in Cairo. Eltahawy, 44, has reported that she was also sexually assaulted during her 12-hour detention. She is in Egypt covering the violent protests in Tahrir Square and its environs. Eltahawy is the first Egyptian journalist to have lived and worked for a western news agency in Israel, and she continues to be a columnist for The Jerusalem Report.

Early Thursday morning Cairo time, Eltahawy tweeted that in Tahrir Square it was “Pitch black, only flashing ambulance lights and air thick with gas.” Three hours later, she tweeted, “Beaten arrested in interior ministry.” She was able to do so because, although her own phone had been lost during her beating, an activist lent her his phone so she could get the tweet out. His phone battery apparently died right after that.

It was only after Eltahawy tweeted, with what turned out to be a broken left arm and a broken right hand, “I AM FREE” around 2:00 PM Cairo time, that she was able to get out more about what had happened to her. She tweeted that she had been detained by riot police of the Supreme Council of the Armed Forces (who have control over Egypt’s political transition) and sexually assaulted. “Five or 6 surrounded me, groped and prodded my breasts, grabbed my genital area and I lost count how many hands tried to get into my trousers,” she wrote.

Here is video of her telling her story to CNN.

Military intelligence then blindfolded and questioned her for several hours. At first she agreed to answer their questions because she did not have her passport on her. But later, she refused to continue cooperating “as a civilian.” She was eventually freed by military intelligence, which she said apologized for the actions of the SCAF troops, recorded her statement about the sexual assault and took photographs of her injuries.

“God knows what would’ve happened if I wasn’t dual citizen (tho they brought up detained US students) & that I wrote/appeared various media,” the journalist tweeted. Indeed, it was thanks to quick action by fellow journalists Nicholas Kristof of the New York Times and Andy Carvin of NPR who immediately started a #FreeMona Twitter campaign that trended worldwide within minutes and alerted the State Department, which quickly intervened.

Eltahawy, who is now based in New York, has reported for a variety of publications and news services from countries all over the Middle East and from China. She writes many op-ed articles on the Islamic world and women’s issues, and teaches and lectures on a number of subjects, including the growing importance of social media in the Arab world. A feminist, she refers to herself as “a proud liberal Muslim.”

“The past 12 hrs were painful and surreal but I know I got off much, much easier than so many other Egyptians,” she tweeted.

She also wrote that the whole time she was in detention, she was thinking about the damning article she would write about the experience.