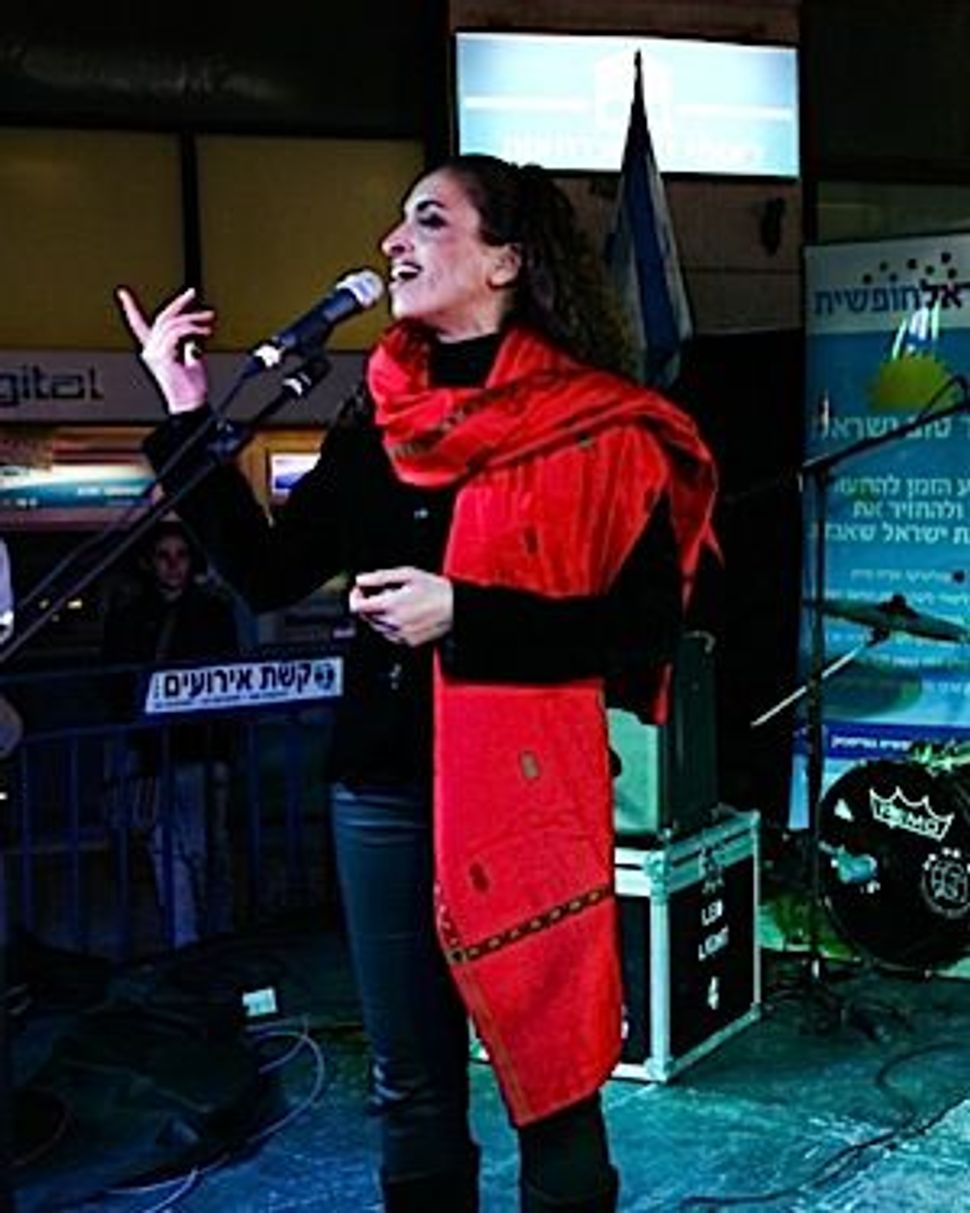 Achinoam Nini, the recording artist better known as Noa,” was among the performers who took the stage recently at Jerusalem’s “Singing for Equality.” The gathering protested the increasing gender segregation in Israel, and the exclusion of women’s images and voices from public spaces. It was organized in all of five days, but was filled with 500 people and a stage set with colorful and elaborate posters declaring, “Good morning Israel, the time has come to wake up and get back the Israel we lost.”

Following her performance, Nini spoke with The Sisterhood:

Why I’m here: [E]verything that I’ve learned about Judaism, learning in yeshiva in the States — first in SAR Academy and then in Ramaz, where I had wonderful experiences — everything that I know to be important to Judaism is being destroyed by some radicals. They’ve interpreted the Judaism that I know and love in a way that I feel is erroneous and unintelligent, and I’m here to fight against that.

What I sang onstage: I sang three songs, one of which, “Mishaela,” is one of my older songs about a girl who looks at a desert and sees water flowing and trees growing. But actually all of this is only happening in her mind — in the eyes of her soul. I chose it because it describes the transformative powers of the human spirit, and I think only through these inner powers that we have to change our situation will we be able to actually change it.

The second song I sang was an aria that I created with my musical director Gil Dor using two children’s songs about roosters. And I dedicated it to the Knesset and Katsav on his way to jail. And I think we are now fighting for the identity of this country as a Jewish democracy. What kind of Jewish democracy it’s going to be. I’m fighting for the kind of Jewish place I want my children to live in. I don’t want to leave and I don’t want to succumb to radical extremism.

What American Jews can do: [They] should stop supporting the government unequivocally. I think that they’re doing great damage to this country by doing that. They should wake up and smell the country. There is not going to be any place to come back to on holidays or on summer vacations if this place is going to turn into a Taliban Jewish state. We’re well on our way to doing that. And we are isolating ourselves, building walls again. We’re building a ghetto here rather than opening it to the rest of the world. I think that American Jewry should take a stand and say we don’t want this. This is not the homeland we dreamed about.