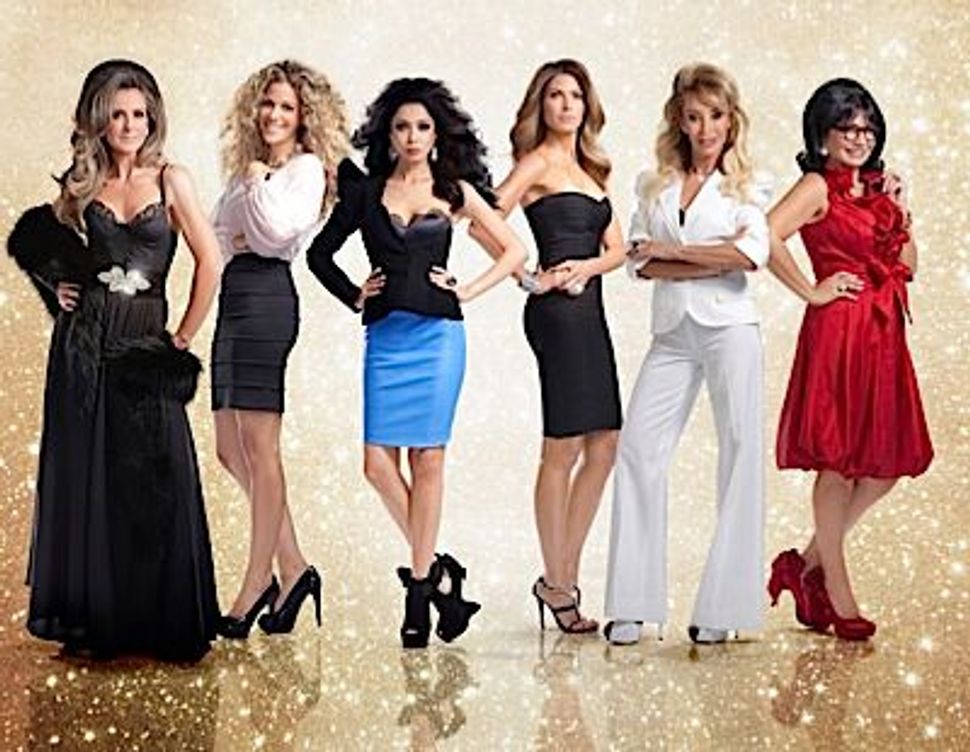 Let’s get something straight: I believe that the world would be a far better place, and women would be far better off, if Bravo had never invented the “Real Housewives” television reality show genre. But unfortunately for women — especially those of Orange County, Beverly Hills, New York City, Atlanta, New Jersey and Washington, DC — there is obviously some deep human need for a glimpse of the lives of the rich and ostentatious, and what better, albeit sexist, prism than the lives of the privileged women? And so the endless viewing of luxury living and staged catfighting, where men are either non-existent, or as interesting than the furniture, became a staple of American television.

Then just as nearly every successful reality series from “Survivor” to “The Voice” has made aliyah to Israel, so came the “Housewives” concept. The staged reality series about wealthy Israeli women, “HaMeusharot,” (“Wealthy Women”) and the timing couldn’t have been more unfortunate. Right around its premiere last summer, Israeli social protesters pitched their tents on Rothschild Street and the ‘tycoons’ become public enemy number one. It was as if the series premiere of Donald Trump’s “The Apprentice” coincided with the emergence of Occupy Wall Street.

You’d think people wouldn’t have been in the mood for the rich and famous. But the show quickly drew an audience and received relatively strong ratings for the financially struggling television channel that airs it.

Now, I’ve got as much of a reality show habit as the average Israeli. In a country where so much actual reality is hard to handle, it’s fun to escape into the fake version of reality. Still, I never watched “HaMeusharot” until Edmund Sanders of the Los Angeles Times took notice of the show and declared:

in the land of the kibbutz — a nation founded on egalitarian ideals, where lawmakers still wear jeans in the Knesset, or parliament, and the flaunting of wealth was once considered taboo — this unapologetic celebration of the lifestyles of the rich and Israeli is hitting a raw nerve.”

Sanders used the show as a jumping off point for a discussion about how there are many more very wealthy people in Israel than there used to be, and how rich Israelis are increasingly willing to flaunt their luxurious lifestyles.

It’s hard to argue with his first premise. Yes, there are more wealthy Israelis, many as a result of the country’s high tech success, and that’s not something to be ashamed of. Yes, there needs to be a way to figure out how that wealth could be better distributed and that’s what the social protests were about.

But as for the idea that “Meusharot” reflects a change in Israeli culture, I think it’s less having more wealthy people willing to show off and more about the whole reality show culture where people are willing to trade their dignity for fame. “Survivor” participants will eat cockroaches on television; “Biggest Loser” contestants will weigh in at 400 pounds in front of the country; women on “The Bachelor” will throw themselves at a guy they’ve just met. So now, wealthy women are willing to shop for designer duds, do their Pilates and get their Botox injected on camera in exchange for becoming instant celebrities. An admirable trend? Not really. But not a local one.

That said, after having viewed the Israeli series — and yes, there was plenty of behavior on the show that made me squirm — I also had some surprising positive feelings about it.

First of all, the women are of various ages, with several over 50 — refreshing at a time when middle-aged women are few and far between in primetime programming. And it is appropriate that there is no mention of the word “Housewives” in the name of the show. Most of the Israeli women depicted are generally fiercely ambitious business owners. To be sure their lifestyle seems highly subsidized by wealthy husbands, ex-husbands and boyfriends, but none of them seem satisfied with being purely trophy wives and girlfriends. The Israeli title “HaMeusharot” is a play on words — the word for “wealthy” and the word for “satisfied and happy” are spelled differently, but sound the same.

Maybe I’m overly influenced right now by the current struggle over religious ghettoization of women but right now, it’s good to see assertive and strong Israeli women on screen pursuing happiness for themselves even in this undesirable context. Their values may be skewed, these rich and materialistic lawyers, event planners and Pilates tycoons are tough women who stand up for themselves and refuse to disappear for anybody. I don’t see them sitting on the back of any bus (that is, if they ever rode a bus). In times like these, I’ll take women who won’t be marginalized, designer duds and all.