Interfaith Mom Is Wrong About Chrismukkah 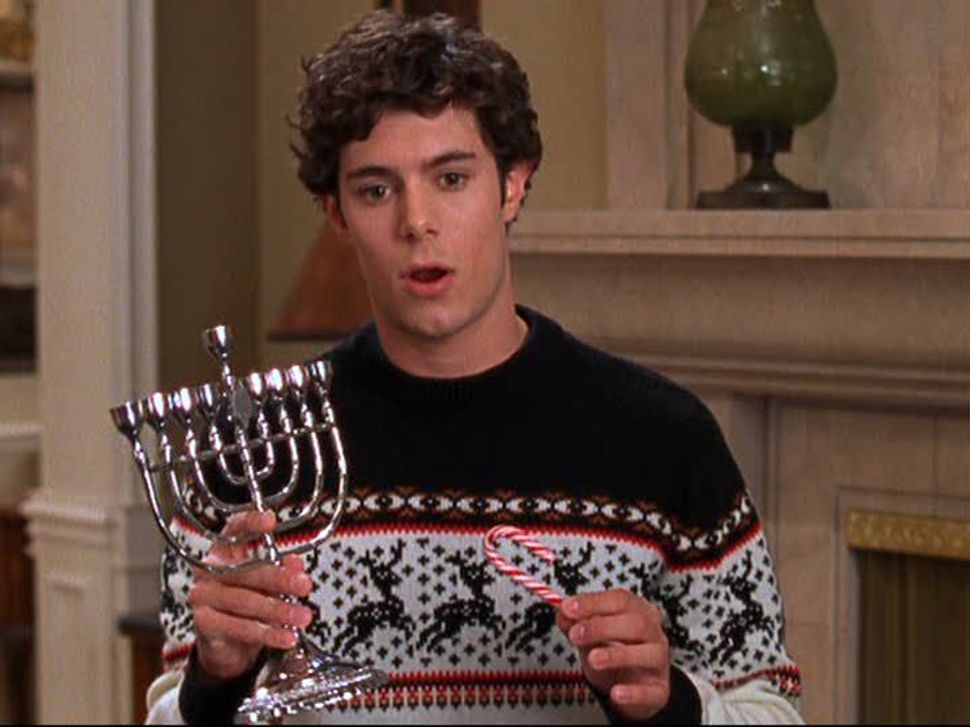 A still from ?The O.C.? ? the show that popularized the term ?Chrismukkah.? Image by Fox Broadcasting

Most of the points you make in your recent HuffPo piece, “8 Reasons My Interfaith Family Celebrates Hanukkah and Christmas,” make so little sense, from where I sit as a Jewish mother, that I feel compelled to respond. I am aware that by doing so I am wading into the roiling waters of touchy issues around intermarriage and the choices interfaith families make.

1). You write that you see “no theological conflict between Judaism and acknowledging the birth of a Jewish spiritual seeker who stood up for the poor and oppressed and changed the course of history (that would be Jesus).”

Perhaps you ought to brush up on some of what distinguishes Christianity from Judaism. Where to begin? All of mainstream Judaism says that there is a conflict between Judaism and accepting Jesus as the redeemer. Jesus and his disciples departed from Judaism so radically, in their rejection of Judaism’s basic tenets, that they birthed an entire new religion. How does that not count as a theological conflict?

2). You contend, “Generations of Jews in America grew up celebrating what they considered to be a secular Christmas. Some of these same people now turn around and tell interfaith families they shouldn’t exchange Christmas presents or carve a roast beast. For my perspective, this is ironic.”

Actually I’d say that the word you should have used here is hypocritical.

Ironic is the fact that Hanukkah celebrates the military and spiritual victory of a religious minority over a majority which forced them to assimilate, and the fact that someone who was born Jewish is now advocating for that same assimilation without being forced to do so.

3). You say that, “My family believes our interfaith children should be allowed to experience the major holidays represented by both sides of our family. You could even argue that forbidding the Christmas tree only makes it more desirable.”

I know a number of families where one parent is Christian and the other Jewish. It seems to work well for most to celebrate Christmas (and enjoy the Christmas trees) at the non-Jewish grandparents’ or aunt and uncle’s home. In their own home, however, the only thing celebrated is Hanukkah and Judaism. It makes clear a critical distinction, and communicates the important value of being loving and respectful with family while at the same time provides the message that theirs is a Jewish home.

It is also quite possible to enjoy Christmas decorations without letting go of the distinction between our celebrations and theirs. My family enjoys looking at the houses festooned with Christmas lights in Dyker Heights, Brooklyn, for instance, because they’re fun. But there is no question that they are Christmas decorations, not Christmakkuh lights.

4). “Christmas trees, Yule logs, holly and mistletoe are apparently pagan pre-Christian European traditions anyway, absorbed into the modern celebration of Christmas. I want my children to acknowledge the origins of these ancient customs, not simply write them off as ‘secular.’”

Um, okay. So tell them about the origins of the ancient customs. One of my daughters asked me just the other day what mistletoe is about. I told her. That doesn’t mean we’ll be hanging it in our doorway.

Parenting Jewish children in a mostly non-Jewish culture means there are many opportunities to explain what this or that is about. I am happy to model respect for the religious practices of others and, at the same time, make sure my kids know that they are not ours.

5). You write, “On Hanukkah and Christmas, the shared theme of the miracle of light (whether from a guiding star or oil that burned for eight nights) is probably not a coincidence. Both traditions function to ward off the dark of the winter solstice. This synchronicity, and the evidence that religions co-evolve, influence each other, and respond to the same human needs, provides a key moment of identity integration for interfaith children.”

I’m not sure any synchronicity is involved in the fact that celebrating light is an aspect of both Hanukkah (actually it’s pretty much the central point of Hanukkah) and Christmas (for which it seems more tangential). Many religions have such practices. Don’t forget Diwali, the Hindu festival of lights. And of course there is interplay between religions and cultures over time. That doesn’t mean that it’s wise to create a mash-up for your family.

A defining aspect of being Jewish in America in general, and of celebrating Hanukkah in particular, is that to be Jewish is to be different than the American Christian mainstream. If we refuse to recognize that as part of Hanukkah, well, then, the holiday is just presents.

Hate to sound so maternal, but ‘would you jump off a bridge if Sally was jumping off a bridge?’ Dressing as a fancy-hot-pants prostitute is good enough for Barbie and Victoria’s Secret models. But just because it’s good enough for them is it good enough for you? I’d guess not. We all make choices about ways we want our kids to resist being sucked into some of pop culture’s influences. Why is music any different? Cue up Matisyahu’s Hanukkah song, and you’ll be a much cooler mom than if you insist on subjecting them to Irving Berlin.

7). “The Christian partner in an interfaith marriage may experience holiday blues if prohibited from experiencing beloved family traditions such as singing carols and baking gingerbread. Children do not benefit from having depressed parents.”

No doubt it is hard for a non-Jewish parent who commits to raising Jewish children to let go of the family traditions they were raised with. But many things are demanding for us as parents and we do them anyway because it’s what is best for our kids. Having a clear religious and cultural identity in the home is better for kids than laying it on their young shoulders to choose which religion they prefer as they grow up, and risk hurting mom or dad. When I was at a taping of “The Daily Show” Jon Stewart said, “I’m Jewish and my wife is Catholic. So we’re raising the kids … confused.” At least he was honest about it.

8). “Children thrive on ritual, and on a feeling that their parents are equal partners in the family culture. My children love the ritual of lighting Hanukkah candles, and they love the ritual of tree-trimming. We do not mix these rituals together. We do not hang dreidels on our tree or stuff gelt in our stockings. We are not creating a new religion. We are simply sharing with our children each of the separate traditions into which they were born.”

I’m not sure I see the point of laboring to make the distinctions you do. But I cannot agree with you more about one thing: Children thrive on ritual. Many of us adults do, too. And we Jews are lucky. We have an opportunity to bring the light into our homes and souls each week with the lighting of Shabbat candles, as well as on Hanukkah.

If you (and your husband) are genuinely engaged with living a Jewish life, rich with our many rituals, family celebrations and opportunities for fun, then trust me: Your kids will feel pleasure and pride, and not any Christmas envy at all.

Interfaith Mom Is Wrong About Chrismukkah