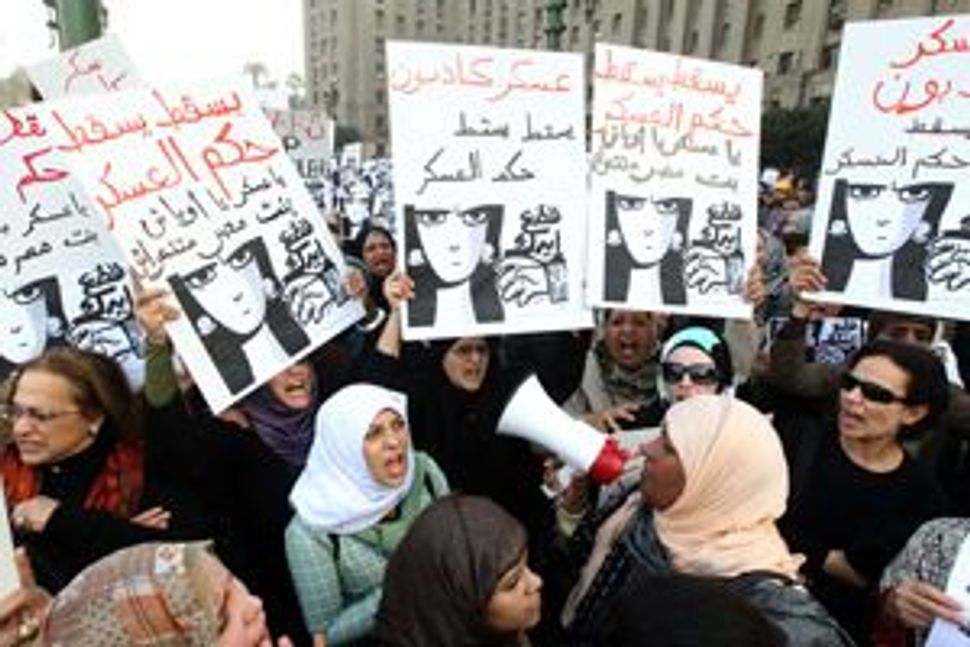 Before, during and after the fall of President Hosni Mubarak, women have been the focus of the protracted conflict in Egypt between grassroots protesters and the military regime. First it was the attack on CBS reporter Lara Logan, then the so-called ‘virginity checks’ on women protesters detained by the Egyptian army. And this past week the world was shocked by to the horrific photographs of female demonstrators being beaten with metal poles, kicked and stepped on and then discarded like garbage. What galvanized world opinion was one photograph that will become iconic, of the demonstrator whose black robe was ripped from her body, laid prostrate on the ground with her blue bra exposed. Max Fisher wrote in The Atlantic that:

there is something especially barbaric about this photo. The taboo of violence against unarmed women is unusually strong in the Arab world. But to watch three soldiers beat a defenseless woman with batons, their fists, and for one extraordinarily cruel soldier with his boot, is not even the most provocative part. For these men to pull her black abaya above her head and expose her midriff and chest is, for Egypt, a profound and sexually charged humiliation. And there is a certain awful irony of using that abaya, a symbol of modesty and piety, to cover her face and drag her on the street.

Adding insult to injury, the military has repeatedly justified brutal and sexually aggressive treatment of female protesters by calling them immoral and accusing them of being loose women at best, and prostitutes at worst.

Impressively, Egyptian women seem to be stronger than the pressure being applied to them. On Tuesday they showed that they wouldn’t be intimidated by the beatings and the threat of bodily harm, and hundreds turned out for what is being called the largest all-female demonstration ever to be held in the country.

It seems to me that Egyptian women are between a rock and a hard place. On one side are the brutal forces of military dictatorship clinging to power. On the other is a gentler, but still frightening form of oppression that looms in the aftermath of the first round of elections that were recently held in the country, which handed a decisive victory to the Islamists: both the Muslim Brotherhood and the extreme Salafists. The Salafists immediately began speaking openly about legislation that would force gender segregation, require women to wear modest dress and other steps that would move Egyptian law closer to traditional Sharia law. Another troubling sign of the election results was the fact that female representation in the government will be tiny to non-existent. Neither dictatorship nor democracy seems to point to a very promising future for the fearless Egyptian women who rallied so bravely in the streets of Cairo.