In Brooklyn, Dressing for the Back of the Bus 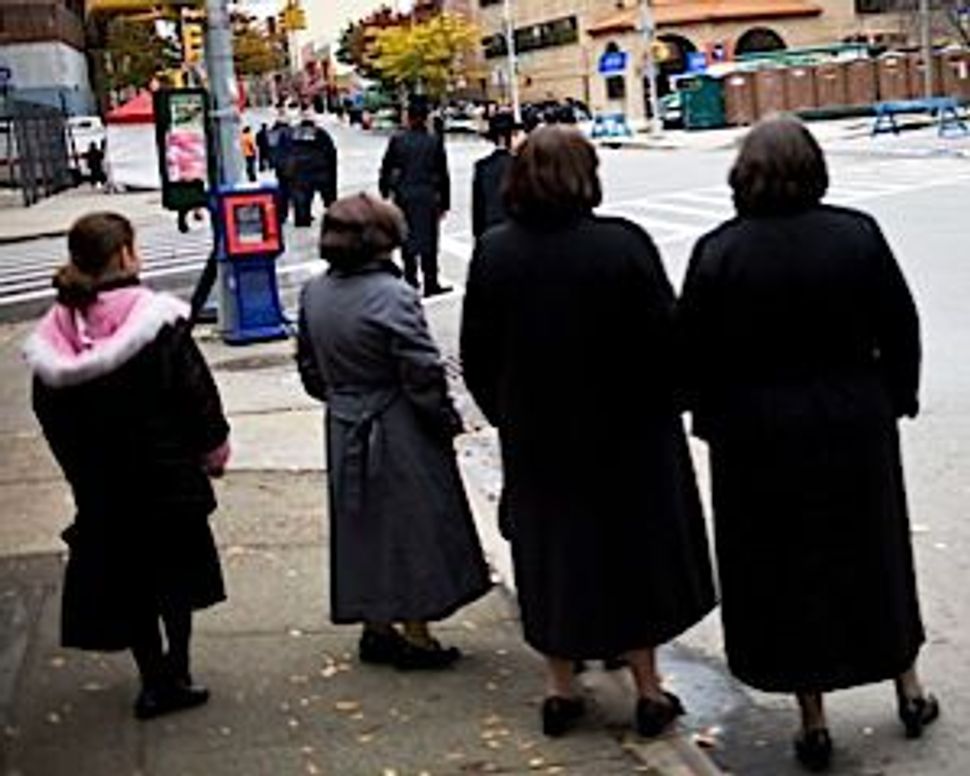 It used to be that while walking in Williamsburg, Brooklyn on a fine spring day or attending wedding in nearby Boro Park, you would see how stylish Haredi women could be. Modestly attired to be sure, with heads cloaked in hats over wigs and clothing safely reaching to above the collarbone, to the wrist and to the calf, but chic nonetheless. Many wore sharply tailored suits and well accessorized blouse-and-skirt ensembles. Skirts were often navy or black, but the blouses and jackets and suits would be pretty colors, occasionally bright and patterned.

Over the past few years, that has changed. Now even on young girls, as well as on boys and men, clothing is mostly black and white, and unremittingly drab. I’m not the only one to notice. Judy Siegel-Itzkovitch, in a “reporter’s notebook” in The Jerusalem Post about the recent Puah Fertility Institute conference, wrote: “Haredi woman and even schoolgirls have in recent years abandoned colorful dresses and coats (even housecoats), and shops in Haredi neighborhoods illustrate the darkening female wardrobe.”

I have my own theory as to why — that it is part of an ascendant culture that expects women to diminish their presence, to disappear except when absolutely necessary. But I also thought I would check with an expert. I reached out to the Forward’s “Wonders of America” columnist Jenna Weissman Joselit, a professor of Judaic studies and of history at George Washington University, whose specialty is the relationship between material culture and identity.

She is speaking at a March symposium at the Jewish Theological Seminary, “What to Wear: Women, Clothing, Religion, where she will give a lecture on “In Good Taste: American Jews and the Pursuit of Acceptance.”

Her assessment, which she acknowledged wasn’t empirically grounded, agreed with my own. “It seems to me that it’s of a piece with other efforts within the Haredi community to render women inconspicuous and unobtrusive,” she said. “To put it another way, it’s the sartorial equivalent of having Haredi women sit at the back of the bus.”

She continued: “Dressing in dour colors is also a form of defeminization, which goes hand in hand with the Haredi community’s increasing marginalization of its women.”

Weissman Joselit added a fascinating fillip when she wondered “whether there’s another factor at work here: the growing prominence of sumptuary [religious] laws and other top-down efforts to control and regulate conspicuous consumption.”

It makes sense to me, since it’s been a decade since a coalition of Haredi rabbis made an attempt to limit how much families were spending on bar mitzvahs and weddings.

Are there any Haredi women reading who can share their perspective on why the change in sartorial style, from vivid to dreary, has taken hold?

In Brooklyn, Dressing for the Back of the Bus