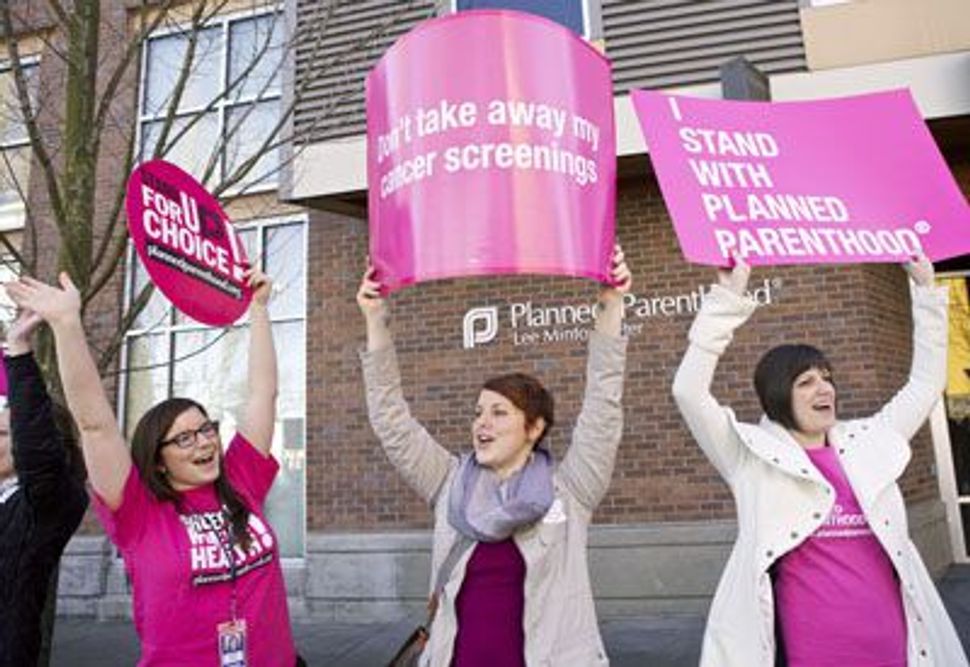 Not to flog a whimpering horse with a frayed pink ribbon, but since the Komen defunding of Planned Parenthood story broke last week, and the organization got whiplash from social media-fueled opposition before standing down and agreeing to rescind its ill-advised policy, more Jewish players in the story have emerged.

It turns out that Ari Fleischer, a fellow Jew, long-time friend and fellow Republican of Komen CEO Nancy Brinker, was secretly involved with interviewing candidates for the Komen vice president position filled by anti-abortion former political candidate Karen Handel. In an interview with at least one candidate, according to the blog Think Progress, he focused on how Komen should handle Planned Parenthood, which provides a range of reproductive health services, including breast exams and abortions.

Think Progress, which broke the story of Fleischer’s involvement, is a progressive policy-focused blog. The Washington Post then interviewed him further about his role in the debacle here.

Fleischer, of course, was President George W. Bush’s press secretary and since leaving the White House founded Ari Fleischer Sports Communications, a press management firm which counted Tiger Woods among its clients after the golfer’s public acknowledgement of his sex addiction.

But back to Komen. According to Think Progress:

Fleischer’s high-level involvement with Komen further complicates its image as an apolitical cancer charity. Fleischer is a prominent partisan commentator and a longtime critic of Planned Parenthood. In his book, “Taking Heat,” Fleischer criticized Planned Parenthood as a partisan, ideological organization that receives undeserved positive coverage in the press.

In 2001, Fleischer said that the Clinton administration verged too far to the left on family planning efforts because “if Planned Parenthood wanted it, the previous administration favored it.”

Gloria Feldt, an occasional Sisterhood contributor and former national president of Planned Parenthood, writes in The Daily Beast that Komen’s Planned Parenthood problem is women’s “Tahrir Square moment” and “should galvanize women to fight the powerful fringe obsessed with others’ sex lives.”

If this were just about Planned Parenthood or yet another battle over abortion, the outrage would be dissipating. Women’s groups would have screamed their righteous indignation, raised a lot of money, and made no systemic change. Soon, the same Kabuki drama would be played out with another congressional attack or another worthy organization defunded.

But as a friend e-mailed me, ‘This is not a time to forgive, this is a time to find an alternative.’

It’s not yet clear what that alternative will be.

But at least one thing from the whole sad debacle is clear: that the Komen brand — and if Nancy Brinker has succeeded in anything, it has been in making the foundation she created in her sister’s memory into an instantly recognizable brand — has been tained.

Considering the plethora of causes vying for donor dollars, with this new revelation it is hard to imagine that Komen’s 2012 fundraising results will match 2011’s.