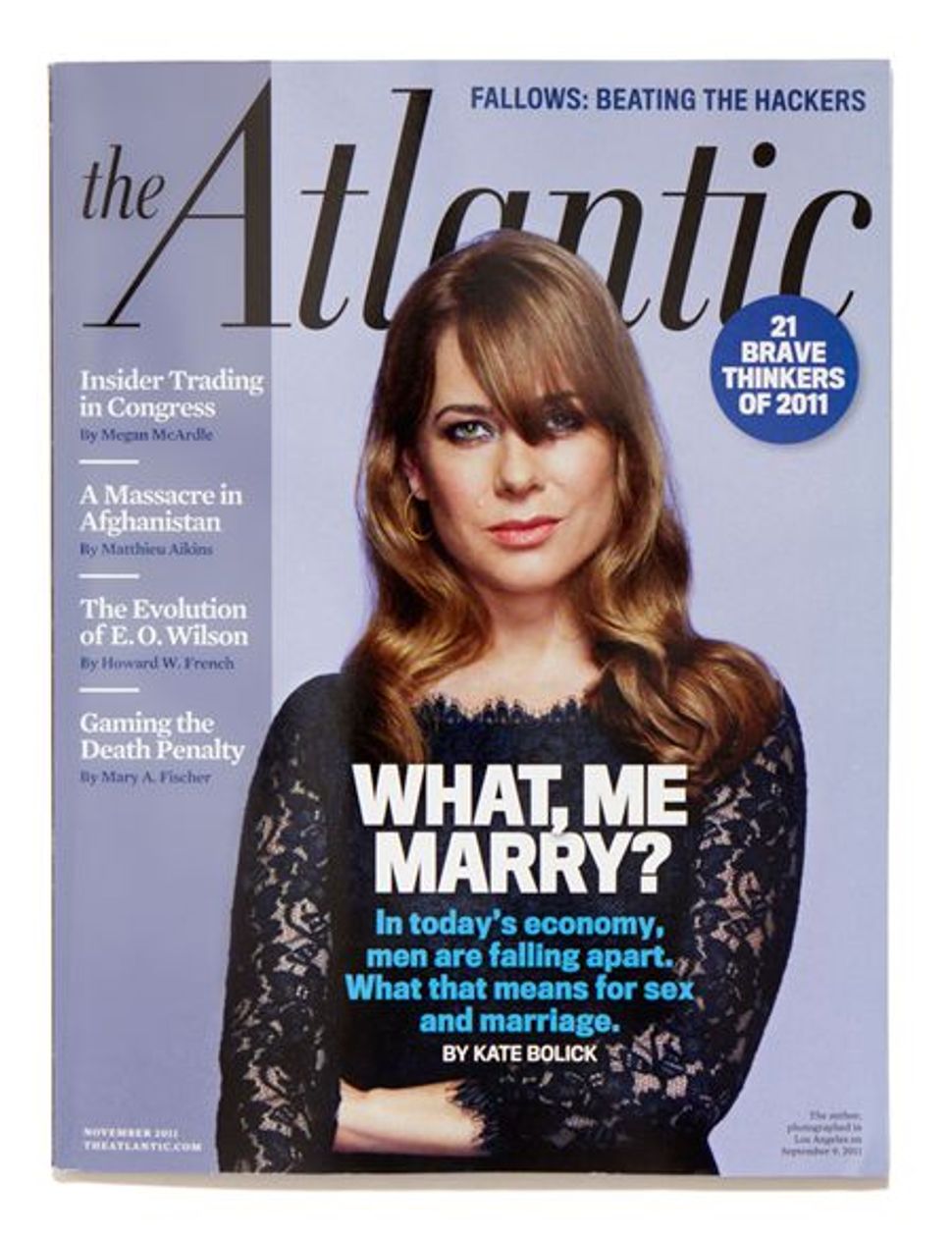 An Atlantic cover story about single women. Image by The Atlantic

Over the summer in The Atlantic, writer Kate Bolick looked into why smart, attractive women like herself may never get married. Through a heavy dose of anecdotes and a smattering of science, Bolick ascertained that the problem is that the more women achieve more the less they have in the way of marriage prospects. She boils her marriage choices down to two categories: the growing number of under-performing men (referred to as“deadbeats”), and the increasingly rare high-performing “playboys,” who have more power than ever in this era of male decline.

Bolick’s piece was a blockbuster in the world of magazine articles, earning her 50,000 Facebook likes and a mega book deal. There’s even a TV series in the works. Her story clearly tapped into some real anxiety about how we live now — sociologist Eric Klinenberg has a new book in which he argues that the rise of solo living is one of the biggest demographic shifts of our time — but ultimately the social science girding her analysis was a little weak.

Now marriage historian Stephanie Coontz is out to set the record straight about high-achieving women and their marriage prospects. In a recent New York Times editorial she writes: “For a woman seeking a satisfying relationship as well as a secure economic future, there has never been a better time to be or become highly educated.”

Coontz goes on to say that there was indeed a time when a women’s success could work against her in her personal life, and for most of the 20th century women were indeed forced to choose between a family and a career. But now not only does achievement no longer hurt women, in can actually help them.

One reason educated heterosexual women may worry about their marriage prospects today is that overall marriage rates have been slipping since 1980. But they have slipped less for educated women than for anyone else. Furthermore, college-educated women, once they do marry, are much less likely to divorce. As a result, by age 30, and especially at ages 35 and 40, college-educated women are significantly more likely to be married than any other group. And according to calculations by the economist Betsey Stevenson, an educated woman still single at age 40 is much more likely to marry in the next decade than her less educated counterparts.

Coontz also mentions that educated women get more help from their husbands with housework and have more satisfying sex lives.

So why did the piece strike such a loud chord when its thesis was a little wrong?

I think it has something to do with the unending fascination with the single woman. If you think about it, the plight of the single women has a little something for everyone. Singles get a sense of comfort knowing that they are not alone. Marrieds and long-time cohabitators get a little ego-boost knowing that, despite the alleged odds, they found a partner. Social conservatives like the fact that marriage is still of interest to feminist-types like Bolick, and social progressives and/or feminists find validation in the evidence that successful and powerful women are still not embraced in our society.

What bothers me about the abiding interest in single women is the mechitza, or partition, it maintains between men and women when it comes who is responsible for our collective personal lives. We hear about how shifting gender roles have contributed to the decline of marriage, but the onus tends to fall on women and what they can be doing differently or better. We rarely see this level of exegesis applied to the single man.

Now I know that things like marriage and children tend to be of more interest to women, and I am most definitely one of those women. However, just because I am interested in these matters, does not mean that I only want to read about them from a woman’s perspective. I do hope that Bolick’s book will include the other half of her story, and get into the lives of the “playboys,” the “deadbeats,” and those in-between.