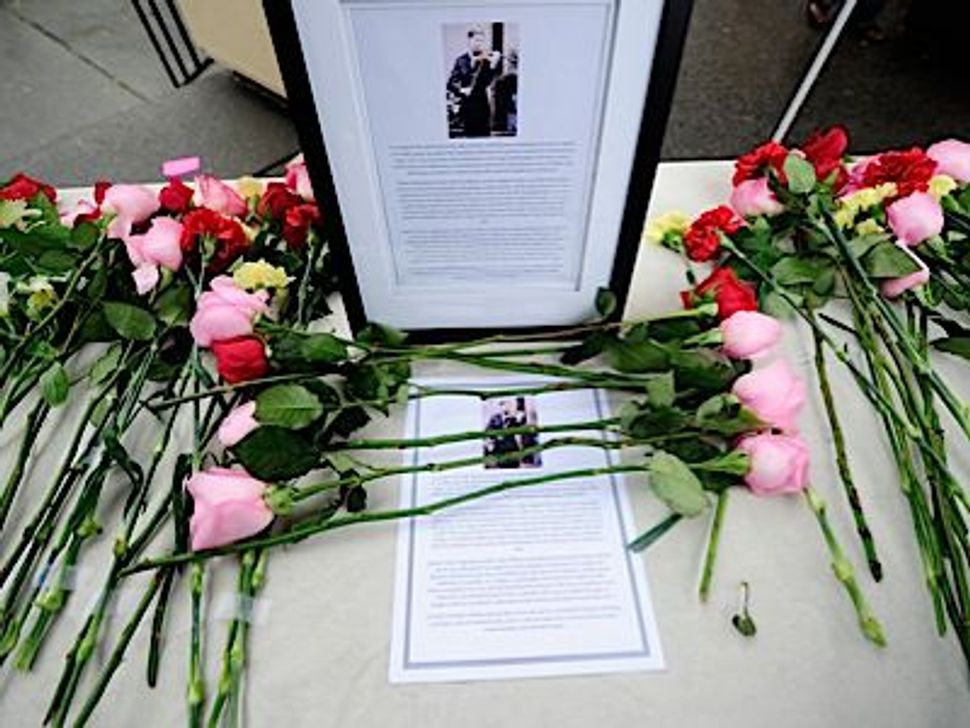 A memorial to Tyler Clementi Image by Getty Images

The roommate, Tyler Clementi, jumped to his death from the George Washington Bridge a few days later. Dharun Ravi, who has been charged with invasion of privacy, bias intimidation and evidence tampering, is on trial in New Jersey. In closing arguments, his attorney defended Ravi as “an 18-year-old boy, a kid, a college freshman [who] had an experience…that he wasn’t ready for.”

Reading The New York Times account illustrates a serious problem: that an 18-year-old who has intentionally done such represhensible things could be reasonably described as “a kid” who didn’t mean it.

We’ve all seen it, practically from the time our kids are born. I let go of a friendship with a woman I otherwise adored from our childbirth ed class because she wouldn’t, or couldn’t, teach her son to stop hitting mine (and others) when they were toddlers and preschoolers.

It’s often not easy; we want to be loving and supportive of our children, and I’m sure no one consciously plans to indulge their children. What indulging them means changes as they grow. We expect different things from a 12-year-old than we do from a 6-year-old or a 3-year-old, of course.

But making sure our kids know what is right and what is wrong is as much a part of parenting as getting them to their playdates and soccer games. One of my children (I’m not saying which one) recently related an incident in which he or she had padded the truth to someone they were talking to. It wasn’t horrible, it didn’t cause anyone harm, but it was still unacceptable (even if a common thing to do). I told my child how wrong that is and my darling child said they didn’t see the big deal. I got fairly upset, making it clear, loudly, that it is a big deal, and why. That got my child’s attention, and I hope left a lasting impression that will shape my child’s choices in the future.

I wonder if Dharun Ravi’s mother ever called him out on his behavior. Morally corrupt behavior doesn’t start at 18.

Then again, perhaps there is a cultural shift afoot.

This New York Times op-ed by now-former Goldman Sachs executive Greg Smith (who is Jewish, I was proud to read in his piece), explains that he quit the enormously influential investment bank on March 14 because it has lost its ethical bearings and he didn’t want to work at a company where the only concern is making money at any cost.

His article ricocheted around the web. And its cultural impact led to two New York Times stories the next day, topping the main news section, and also the front page of the business section.

Smith “has a really high moral fiber,” one of his Stanford classmates said in the main article. What a breath of fresh air it is to see someone put their values before self-interest.

I don’t know if Smith, who had been with Goldman Sachs for 11 years, has any children, but I hope so, because there is little doubt that his children will be taught the difference between right and wrong.

If more parents would do the same we’d have fewer bullies like Dharun Ravi, and fewer victims feeling as if they have no choice but to jump off a bridge.