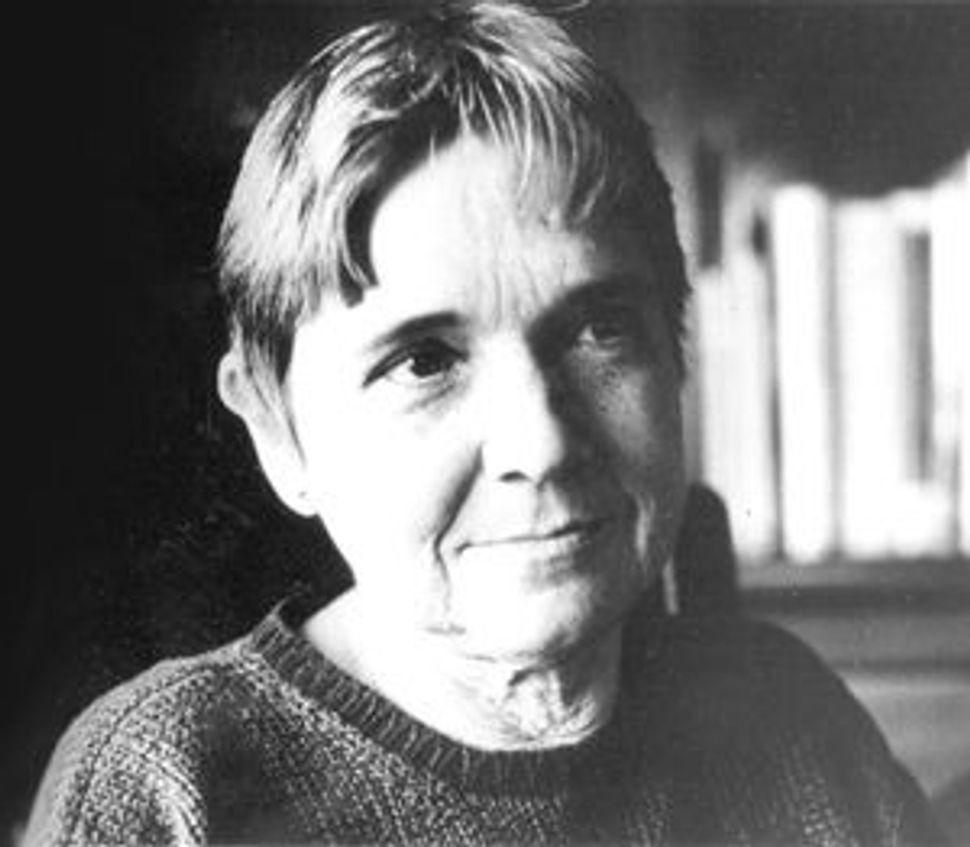 Adrienne Rich has died, and a voice who provided invaluable insight to the discourse on motherhood, on feminism, on Jewish identity and on sexual politics, has been stilled.

Rich, who was 82, died Tuesday at her home in California. Described in her New York Times obituary, as “a poet of towering reputation and towering rage,” Rich was a prolific writer who authored 32 books of poetry and prose, and indefatigable political activist.

Born to a Gentile mother and a Jewish father, Rich grew to identify strongly as a Jew. When a student at Radcliffe, she married a man from an observant Jewish family, and together they had three sons. Though her early poetry had been praised by W.H. Auden, she stopped writing, for a time, when she married. It was domestic life that brought her back into writing, and into her evolving identities.

In her brilliant 1982 piece, “Split at the Root: An Essay on Jewish Identity,” Rich wrote, “The experience of motherhood was eventually to radicalize me; but before that I was encountering the institution of motherhood most directly in a Jewish cultural version; and I felt rebellious, moody, defensive, unable to sort out what was Jewish from what was simply motherhood, or female destiny.”

“Split at the Root” is a meditation on identities both suppressed and expressed. Rich wrote of her dawning Jewish consciousness, the awareness of being “other,” imposed on her by anti-Semitism that was both aggressive and internalized by her father, by characters she met in literature, by her crowd in college, and by random strangers she encountered.

Her awareness of being “other” also grew as she began to explore her identity as a lesbian, after she separated from her husband in 1970. Shortly after their separation he killed himself. In 1976 Rich began a relationship with writer Michelle Cliff, which lasted until her death this week.

Her political engagement spanned her artistic and Jewish identities. Rich was involved with the New Jewish Agenda, and she was a founding co-editor of Bridges: A Jewish Feminist Journal when it began in 1990. Bridges ceased publication last year.

Rich was awarded many prizes and fellowships for her writing, including Guggenheims, a MacArthur and the National Book Award. She turned down the National Medal of Arts in 1997, to protest the House of Representatives’ decision to end the National Endowment for the Arts and the Clinton administration’s policies on the arts and literature.

For Rich, there was no separation between art and life, politics and art, or life and politics. She lived her beliefs.

Something she wrote in “Split at the Root” makes me think of the ever-more contained public comportment expected of Haredi women, though Rich was writing about the pressure in her family to act “more Gentile”:

“We — my mother, sister and I — were constantly urged to speak quietly in public, to dress without ostentation, to repress all vividness or spontaneity, to assimilate with a world that might see us as too flamboyant.”

The world is a poorer place for no longer having Rich’s voice in it. But I am grateful for what she left us.