The End of Feminist Seders? 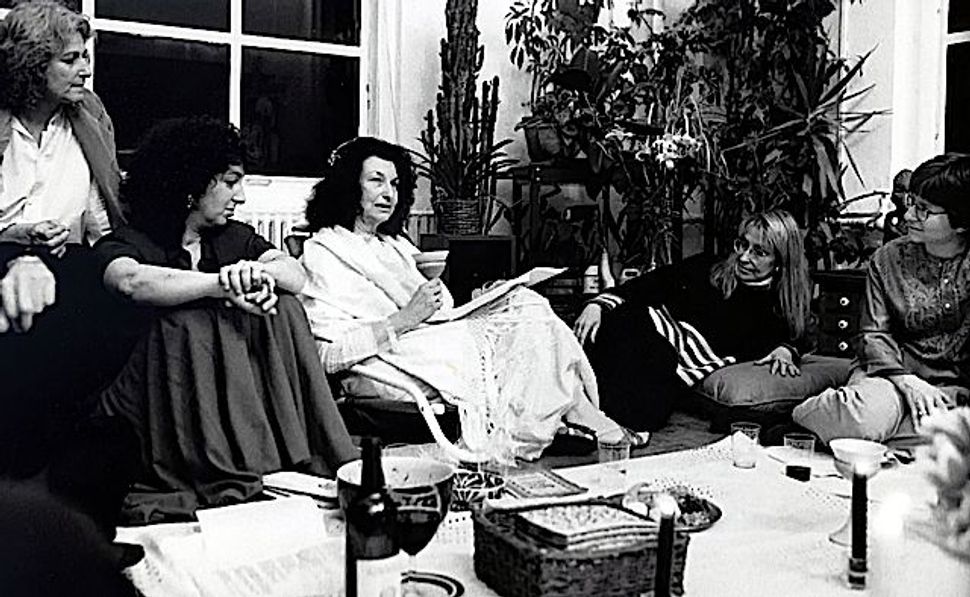 Esther Broner raises a cup, as she tells the Passover story with her ?Seder Sisters.? Image by Joan Roth

Google “feminist seder,” and links to articles about Seders long passed come up. Google “women’s seder,” however, and you find links to dozens of current model Seders for women, run by synagogues, JCCs and other Jewish institutions all over the country. The word feminist doesn’t appear.

Outside of the original, private feminist Seder — still going strong in its 37th year, led by “Seder Sisters,” including founders Letty Cottin Pogrebin and Lilly Rivlin, there just don’t seem to be many.

Some 20,000 women (and a few men) attended the Ma’yan feminist Seders that were held in Manhattan from 1994 through 2005. Today, though, I could only find one feminist Seder, which was held at Hartford, Connecticut’s Charter Oak Center, in March.

Is that a failing of some kind, a loss of collective will, or was the interest never widespread to begin with? To be sure, there have long been more “women’s Seders” than “feminist Seders.”

“There are people who are uncomfortable with ‘the F word’ but what they do is quite feminist, if you look at the content,” Pogrebin told The Sisterhood. It may be called a women’s Weder but if participants talk about “the ten plagues of women, an analog to the four questions, if they are bringing their foremothers into the circle, then what is the difference?”

“I don’t really care if people are uncomfortable with ‘tshe F word’ as long as they pursue the goals of feminism,” she said.

Tamara Cohen, editor and co-author of the haggadah used at the Ma’yan seders, and now a student at the Reconstructionist Rabbinical College, was at her young son’s Jewish day school model Seder, which featured a Miriam’s Cup on each table. “I thought ‘oh, this is now part of the mainstream I never imagined it would be.’ That’s pretty amazing,” she said.

At the same time, the “New American Hagaddah,” edited and translated by young literary lions Jonathan Safran Foer and Nathan Englander, seems to purposely go in an opposing direction.

I just don’t need another text that couldn’t find a way to include females. In this version, G-d is always male, and ancestors are always ‘fathers,’ and all other pronouns and players are male. Really? Do we really have to start out our seder with a conversation about the exclusion of women… from the text (and thus from the story and the ritual) when there are so many creative, even neutral ways of handling that that would be fine with even the most observant at the table.

It is “pretty shocking to me that in the ‘New American Haggadah’ they were able to make that choice and no one stopped them,” Tamara Cohen said. “Maybe there are trends and countertrends.”

The End of Feminist Seders?