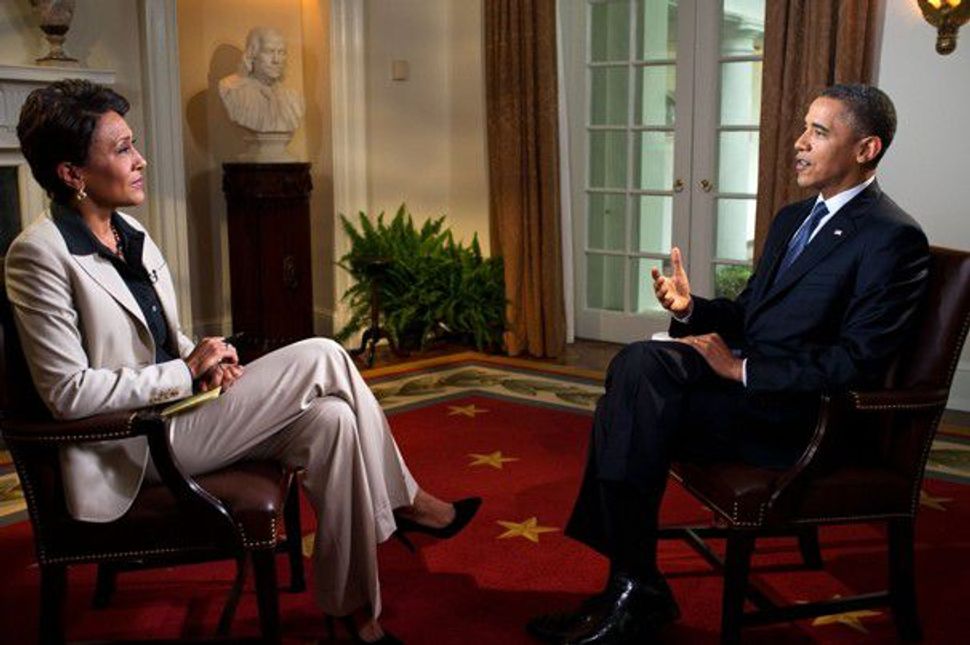 In an interview Wednesday with ABC?s Robin Roberts, the president announced that he supports same-sex marriage. Image by Pete Souza

The public acceptance of gay marriage by the President of the United States — a position that most Jews support — is hardly the end of the struggle for full equality for LGBTQ citizens, who continue to lack many of the same enshrined rights and protections as other minority groups. Similarly, Barack Obama’s historic announcement of what many of us long suspected lay in his heart already will have almost zero impact on policy, and likely little impact on the election, since the issue ranks far below economic ones with most voters at the moment.

Instead, it represents a benchmark. Because his choice of words does show that both feminism and the gay rights community have made inroads where it matters most: our definition of relationships. Obama’s evolution echoed ours.

After all when Obama spoke about the “committed, monogamous” relationships of his gay friends, he was positing marriage as a simple, straightforward commitment between two equal people, not as a patriarchal social construct with the man as the head of the household, literally receiving his wife from her father. That very different vision, after all, is what marriage used to be (after, of course, it evolved from Biblical-era polygamy). Marriage once was a transaction between a bread-earner and a child-bearer. And yet when Obama spoke of marriage, he said:

As I have talked to friends and family and neighbors when I think about members of my own staff who are in incredibly committed monogamous relationships, same-sex relationships, who are raising kids together, when I think about those soldiers or airmen or marines or sailors who are out there fighting on my behalf and yet feel constrained, even now that Don’t Ask Don’t Tell is gone, because they are not able to commit themselves in a marriage, at a certain point I’ve just concluded that for me, personally, it is important for me to go ahead and affirm that I think same-sex couples should be able to get married.

His words reflect nothing of these old visions of marriage. Instead these images conjure up love, commitment, raising kids as partners (not one person raising kids), and even an unspoken freedom from “constraints.”

For this already-evolved concept of marriage, the president can thank social movements on the ground, and also the combination of millions of individual choices. Everyone who has envisioned their marriage as a true partnership, who has rejected marriage entirely and lived in committed but different units, everyone who has embraced gay marriage, has added to the changing of the status quo.

And of course, that simple redefinition of marriage explains why conservatives will resist it till the end (besides their squeamishness about gay sex, that is). They are filled with anxiety about eroding the hierarchy within the institution of marriage, changing the power balance that used to be part and parcel of its structure. But the erosion has already happened. We’ve evolved. The president is just proof of what’s to come.