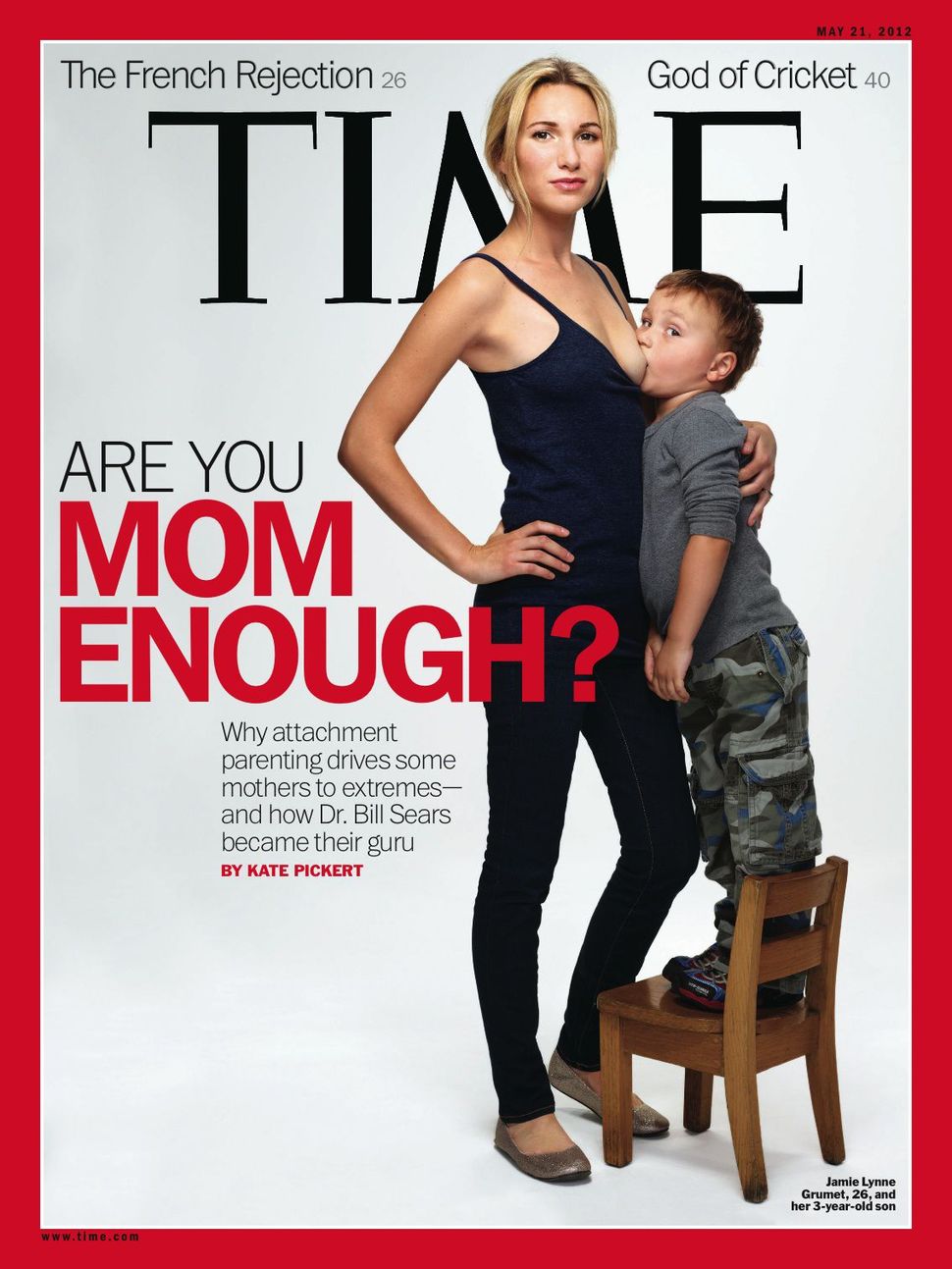 When I saw last week’s much-discussed Time magazine cover with its provocative mom-breastfeeds-toddler photo I groaned, worried that the debate over attachment parenting and breastfeeding would bring with it another chapter in the “mommy wars.”

When it comes to parental choices, such as staying at home vs. going back to work, breastfeeding vs. bottle-feeding, it seems that even some of the most die-hard feminists struggle to apply the rhetoric of reproductive justice — that every choice is unique to the woman who is making it and can’t be understood unless we’re in her shoes to the choices we make after birth.

But the media’s focus on the “mommy wars” ignores the real issue: Without policies that support families, no moms (or dads) can make those parenting choices that are so hyped up by the media. The folks at MomsRising are starting a campaign to ask Time to change its focus on covering families. They write:

What makes TIME’s decision to focus on trying to fan the flames of outdated, false “mommy wars” so utterly shameful is the fact that there are so many real and pressing issues facing America’s mothers right now that aren’t being covered. Issues like the fact that childcare costs more than college in many states, that 80% of low wage workers don’t have a single earned sick day, that women (particularly moms) face rampant pay discrimination, and that over 176 countries have some form of paid family leave, but the U.S. doesn’t.

These facts are stark. We remain the only country in the industrialized world without paid sick leave or mandatory paid parental leave. We have pitiful and costly daycare options, and there is little support for single mothers, poor mothers and others. Bryce Covert recently wrote a piece at the Nation about how new mothers are being driven into debt. She interviewed several women who had complications that led to their being driven deep into debt, or on a razor’s edge.

Tina Villalobos was a schoolteacher working on Long Island when she became pregnant with her second child. Her school gave her five months of leave, but two of those were unpaid. During those months, she also had to pay for COBRA health insurance. Her husband was working part time, and the bills started to pile up. Taking time off “cost me about ten or twelve thousand dollars, not including what I didn’t get paid,” she said, which added up to about $18,000. “That went right on my line of credit. I haven’t been able to put a dent in it.” Now she fears she’s going to max it out and use all $32,000. “It’s scary,” she said, “because if I max out and I need some more I’m not sure where I’ll get it.”

If you’re not depressed enough by these stories, it gets even worse than that: These days, the state is actively prosecuting moms. There’s the case of Bei Bei Shuai, who suffered from depression while pregnant and is now being charged with homicide thanks to a suicide attempt that caused a miscarriage. The New York Times Magazine just ran a piece on prosecutors who are going aggressively after pregnant women who do drugs. There’s Marissa Alexander, the Florida mom who fired a gun in the air to warn off an abusive husband. Alexander is also facing a prison term for homicide. There’s the story of Raquel Nelson, a mom who was crossing a dangerous road late at night because there was no nearby crosswalk. When her whole family got struck by a drunk driver and the accident killed her son, she was charged with manslaughter. Julianne Hing wrote about Nelson’s story in Colorlines

Earlier this month an all-white jury of middle class folks who admitted they had limited experience taking public transportation in the area found Nelson [who is black] guilty of second-degree vehicular manslaughter and reckless endangerment.

The list goes on and on, so discouraging it makes my blood boil. Because these “mommy wars,” that tendency to judge mothers for not being up to snuff, feed directly into this kind of overzealous action on the part of the state. I so desperately wish that we’d turn our attention away from the “mommy wars,” which are the province of the privileged, to the war on moms, which mostly affects low-income women. We need to fight the war on mothers — not each other.