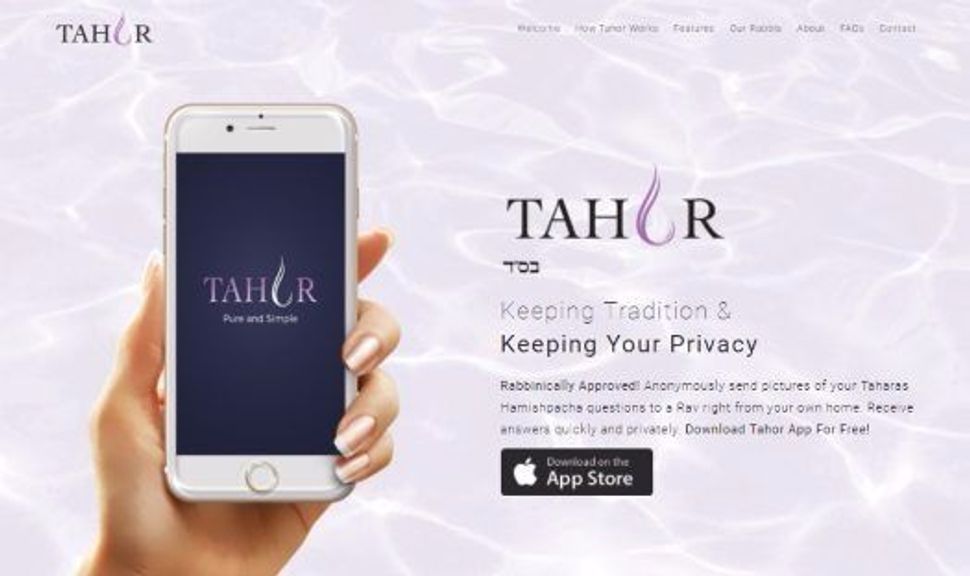 An app can’t do what a rabbi does in person when he makes sure a woman is done menstruating by checking “bedikah” cloths. Image by Tahor

Yesterday on XOJane, my favorite site for a good ol’ fashioned hate-read, there’s a first person post from Chaya Kurtz, a Chassidishe married woman, who writes in the response to the waves of negative press the Orthodox community has received in the wake of the gathering of 40,000 ultra-Orthodox men at Citi Field this past Sunday in order to protest the internet. Most notably, women were not allowed to attend the rally and this fact has resulted in charges of misogyny directed at Orthodox Jews.

Chaya is here to tell us that it aint so. She’s a married, Orthodox woman with a degree in women’s studies (no less) from a large, liberal university. And she’s totally happy with her life, and would like to disabuse the masses about the perceived misogyny in Orthodox Judaism.

Some of the things that she insists on, I won’t quibble with. Yes, I certainly hope that ultra-Orthodox women find their husbands attractive and it’s unfair to suggest that they wouldn’t. I would never suggest that a hipster male is fundamentally unattractive just because I don’t find him appealing so on that point, Chaya, we definitely agree: Attraction is in the eye of the beholder.

But even within that section, there’s already a problem. She writes: “In the Jewish marriage contract, one of the conditions of marriage is that a husband is obligated to sexually satisfy his wife.” While this is all well and true, there’s a part she left out — that in that same contract, he acquires her, like she’s a possession. You see, women are a protected class within Orthodoxy. Yes, you have to treat them right, but they are still subordinate. Don’t believe me? Read the last six months of articles in the general press about agunot.

Further, Chaya asserts, in her section describing the mikveh [Jewish ritual bath] as awesome, that it is as a result of these rituals that Orthodox women have a lower rate of cervical cancer. I mean, yes, they have a lower rate of cervical cancer, but it probably has nothing to do with abstaining from sex during your period. Since most cases of cervical cancers are caused by HPV, a sexually transmitted infection, it’s probably the fact that Orthodox women have fewer sexual partners that is responsible for this statistic. From a paper in the Israel Medical Association Journal that looked at the phenomenon:

However it is extremely difficult to isolate this ritual from other risk factors that are absent in the orthodox group, such as early coitarche, multiple partners, and smoking. A similar low occurrence has been found in other communities with strict sexual conduct that practice endogamy–i.e., marrying within their faith, but do not practice circumcision. The date by Stewart and co-workers also failed to show any significant association between cancer of the cervix and abstinence from intercourse during or after menses in Israeli Jewish women…It should also be mentioned that the great majority of Israeli Jewish women no longer practice niddah yet the incident of cervical cancer among them remains persistently low.

Sounds like the author didn’t do her research but simply repeated the propaganda that she and I were taught about how special mikveh is. (It’s magic! It protects you from disease!) I’m not arguing that she shouldn’t find mikveh meaningful but I can’t stand it when people use psuedo-science to justify their religious rituals.

I’m not here to tell Orthodox women how to feel about their situations. I know very well that a lot of women are more than happy in their roles and lives and are far from meek when it comes to expressing their opinions. But you don’t get much leeway in the types of choices you make in that community and it’s foolish to say otherwise. If you wish to remain in the Orthodox community, you give up certain options, not based on your abilities but because of your gender. And you might be very happy with the set of options that Jewish law allows you, but it’s still biology-as-destiny sort of stuff. If you want to be called “Orthodox” then your role, while not as narrow as many people believe, it hardly allows for all of the things that you could want to do or might be capable of.

Feminism, to my mind, has never been forcing women to choose roles that connote greater visibility and power, but it’s about making those jobs/roles options for women as “natural” seeming as the choice to be a mother and take care of a husband if that’s something she wants to do. So good for Chaya that she is very happy and well-educated and content within her community. But she’s lucky that she hasn’t desired to do something that is out of bounds for women because I doubt she would’ve been nearly as happy in her life if she wanted to do something like, say, be a rabbi or read from the Torah or a million other things.

I’m not saying that equality exists as anything other than an ideal in the secular world. But at least when we confront it, and lately we’ve been having to do it far too often, we’re not cloaking our discussion in this “separate but equal” nonsense.

Again, I get that Chaya and many other women like her are happy with their lives. But don’t believe that this satisfaction means that there is anything approaching true gender equality in the ultra-Orthodox community. Yes, they’re empowered but only to a point.