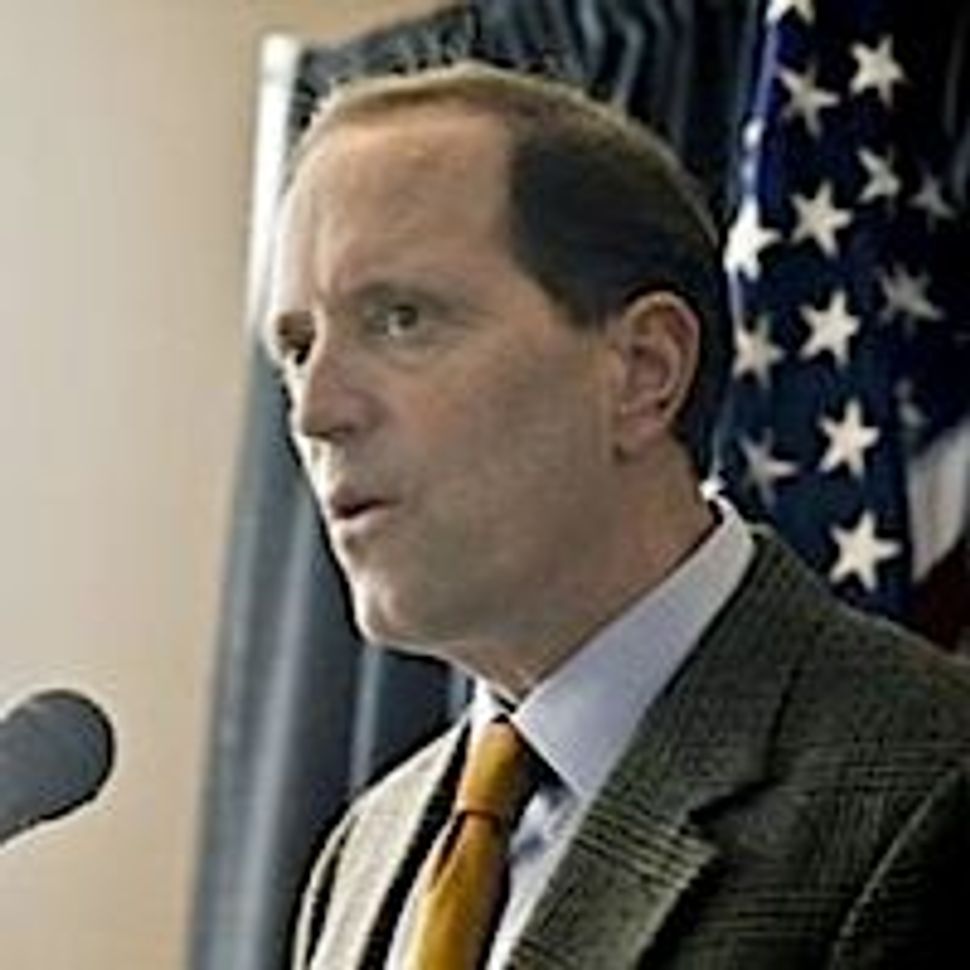 “He is thus inflicting great emotional abuse upon her,” wrote Rabbi Shmuel Herzfeld, the spiritual leader of Ohev Shalom — The National Synagogue, in Washington D.C., on the Huffington Post. He and other Jewish leaders have been calling on Friedman’s boss, Michigan Rep. Dave Camp, to reprimand or fire him since other efforts at communal coercion, including blacklisting, picketing and shunning, have failed. (See this recent Sisterhood post on the subject.)

However, if withholding a get constitutes abuse, if the husband is indeed brandishing a psychological weapon and threatening his wife with it, then the question that should be asked: How did the gun get into his hand?

By trying to get Rep. Camp to punish Friedman for his reprehensible behavior, the Orthodox rabbinate is trying to get the outcome they desire — a divorce for Epstein — without changing the status quo as it pertains to women. Their solution leaves women without agency in Orthodox rabbinic courts, a place where they are not even permitted to testify as witnesses.

I’ve heard Orthodox Jews argue that working within the system is the best way to change the status of women in divorce proceedings. I’ve heard them cite the edict of Rabbeinu Tam, who reinterpreted a part of the Talmud to mean that a man cannot be coerced into giving his wife a get. But what is frequently omitted from their arguments is that Tam’s opinion reversed earlier, more liberal interpretations. Previous to Tam’s 12th century ruling, rabbinic courts often used financial, and even corporal, measures to force a man into granting a divorce; in some instances, the courts were empowered to dissolve the marriage contract even without the husband’s consent.

The very fact that Tam was able to enact a sea change in how the law has been enforced is one example of how matters of Jewish law are by no means immutable. The hands of modern day rabbis are not tied.

And in fact, as Blu Greenberg, a Jewish feminist, famously said, “When there’s a rabbinic will, there’s a halachic way.” The rabbis have found loopholes to enable Orthodox Jews do all kinds of things, such as carrying objects in the public domain on the Sabbath and selling their leavened goods before Passover to avoid a great financial loss.

Yet when it comes to equalizing the status of one half of the population in the eyes of Jewish law, the rabbinate keeps falling very short of the ideal. The best that Orthodox rabbis have managed to come up with is a prenuptial contract that a couple can sign, which enacts heavy fines on the man should he refuse a to grant a get in the future. That is hardly foolproof and its use is not widespread.

But what the Friedman case demonstrates is that none of the rabbinic machinations are all that effective. Friedman has ignored the rulings of more than one Jewish court and all of the public and media pressure exerted thus far. So what to do in those instances where none of the legalistic maneuvers and traditional methods of coercion have worked?

In an interview with the Jewish Review about the issue of agunot, Rabbi Shlomo Riskin, the spiritual leader of the Efrat in the West Bank, was asked why some of the halachic proposals that would enable a rabbinic court to dissolve marriage contract even without the husband’s consent haven’t been accepted by the Orthodox community. His answer was pointed: “I think to a certain extent there is a lack of judicial courage in our time.”

Yet the Orthodox rabbis expect a non-Jewish congressman to be the one to exhibit courage, to fire or reprimand his employee for failing to adhere to the ruling of a religious court. The principle of the separation of church and state doesn’t apply here, I guess. And imagine the outcry that would result if Muslim imams, in an attempt to enforce the rulings of a sharia court, applied to their congressional representatives in such a public way for help.

The discussion we should be having is not how we can more effectively twist Friedman’s arm into granting his wife a divorce or whether public servants should be required to play a part in enforcing religious mandates. We should be talking about how we can change the law so that a woman can walk into court with her head held high and walk out with a divorce that she didn’t have to beg for.

If maintaining a nearly thousand-year-old ruling is more important than offering women equality within the religion, I would at least like to see one of these rabbis condemning Friedman admit as much. It would be refreshingly honest to hear one of them say something like, “When faced with the choice of preserving tradition and promoting justice and equality that would give women the freedom to divorce, we choose the former.”

But that doesn’t make a good slogan for a picket sign, now does it?