Why Our Daughters Should Learn to Use Tefillin 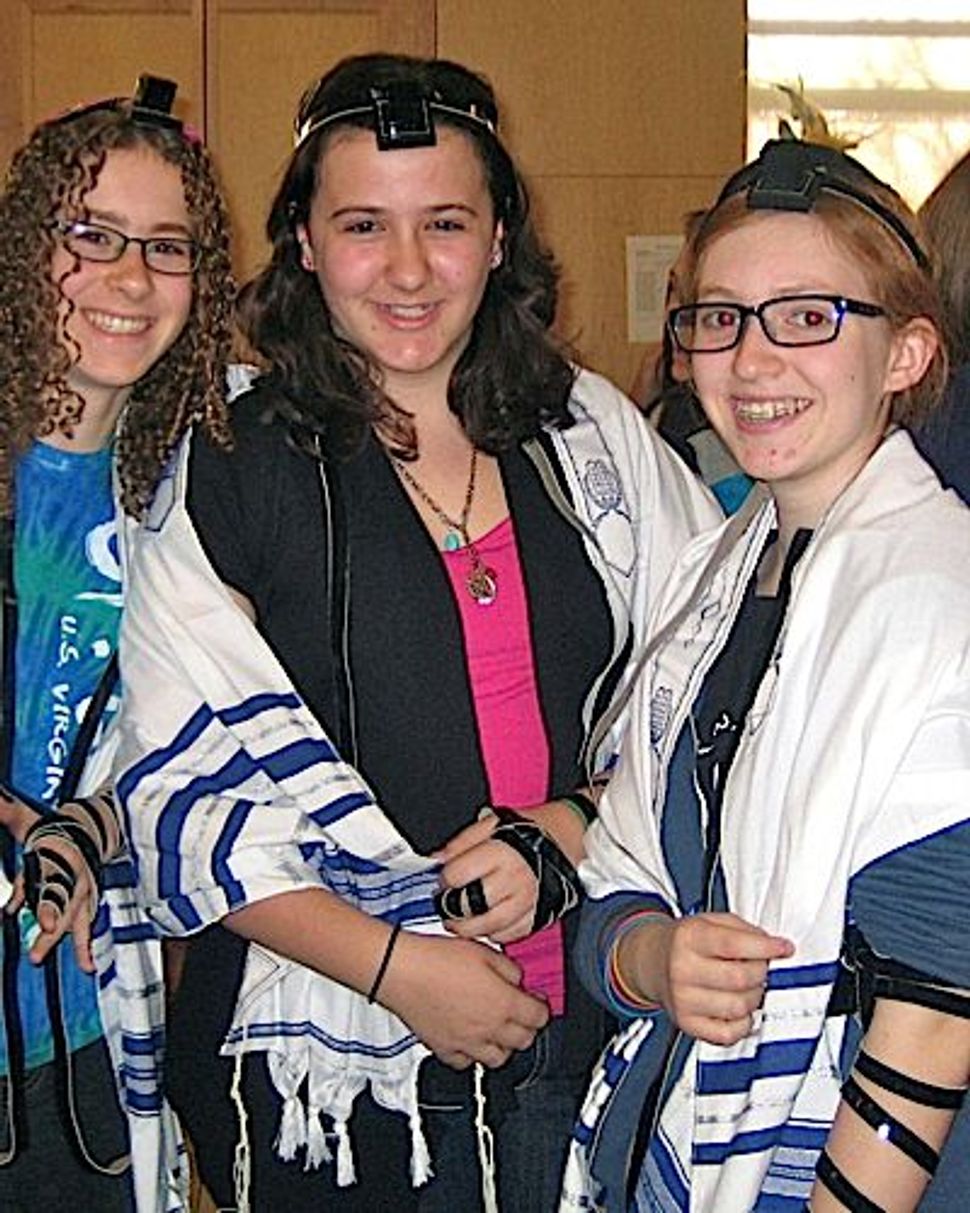 Girlchik (center) and friends in tefillin for the first time. Image by Debra Nussbaum Cohen

Shortly before Boychik’s bar mitzvah, which was a few years back, his zeyde bought him tefillin. I have sweet photos of my (Haredi) father-in-law showing him how to put them on for the first time.

At the time, we were well aware that the scene would not be repeated with Girlchik as she prepared for her bat mitzvah. When asked if he would get her a set to mark the occasion, Zeyde laughed and said, “let her use Boychik’s.”

Now, tefillin is not something that I think Girlchik is likely to regularly use. It’s not something she sees me use, since I’ve never tried them. And while Girlchik does see adult women, as well as men, wearing tefillin during morning minyan at her Jewish day school, it is not required of post-bat mitzvah girls. Or boys, for that matter.

As I learned from interviews for this article about women and tefillin, requiring it as part of Jewish education seems key to it becoming standard practice. And since it is rarely required of girls, and done by fairly few adult women, it doesn’t seem likely to become a routine practice any time soon.

But then again, few Jews feel confident getting up in front of a congregation to lead services or to chant from a sefer Torah, and these are skills I am determined my children master. I want Girlchik, as well as her brother and sister, to know how to access everything in Jewish literature and practice, and don’t want tefillin to be an exception just because I’m not familiar with it. I want them to feel that these traditions are theirs, that they have ownership of these things that can seem intimidating but are their birthright as members of the Jewish people. I don’t want them to feel as if they are not up to the task of some the more challenging practices, as I do.

Girlchik’s being called to the Torah for the first time, at school the Thursday before her bat mitzvah, was the perfect moment for her to learn how to lay tefillin. The teacher leading morning minyan wisely approached her along with two girlfriends who had recently become bat mitzvah, and, with the wheels greased with the promise of chocolate kisses, they agreed to learn how to wrap them over their arms and around their heads. Their teacher — a woman — showed them how. It was a deeply gratifying sight (one I immortalized in photos, annoying the heck out of my daughter as a member of the “mamarazzi.”)

I don’t know that Girlchik will make wearing tefillin — or davening, for that matter — part of her daily practice as she moves through adolescence and into adulthood.

But at least I know that she will have the skills to do so.

Why Our Daughters Should Learn to Use Tefillin