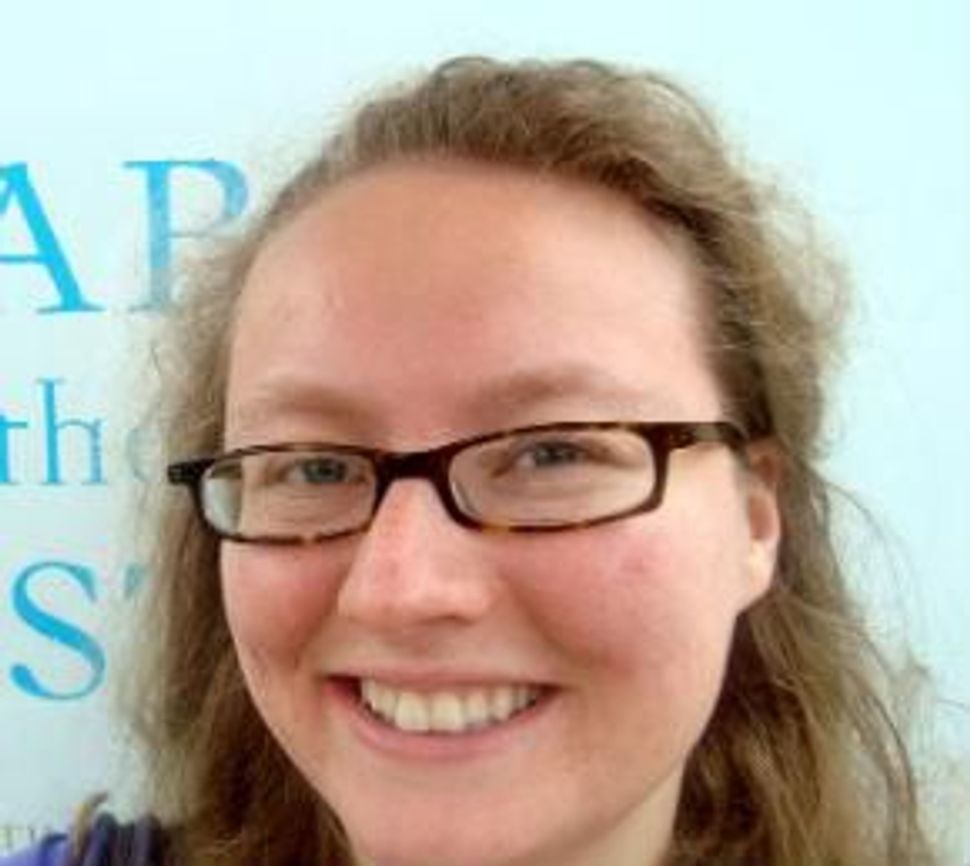 I’d just been to Israel twice and had become deeply embarrassed that I could not understand a language that was my own, despite the fact that there were thousands of years between us. From the first class in college, I fell in love. There was something about Hebrew that was so instinctive to me; it felt like I was coming home. But it was also hard. Harder than I thought it would be, harder than tracing letters before they flickered off the screen.

The verb conjugations killed me. I kept forgetting how to add. I frequently forgot the difference between hatul, cat, and kahol, blue. I walked around in a daze of flashcards. I also spoke to myself in my head for hours at a time in the simple words I began to know, like a six-year-old.

“Ma at osah,” What are you doing? I asked myself

“Yesh li avodah,” I have work.

The few combined phrases I knew limited me and ensnared me in conversations that had no emotional depth or sophistication, but I was so happy. And I worked on my accent. All the time, I worked on my accent. I watched Israeli movies non-stop. I eavesdropped on my Israeli friends talking on the phone with their parents. I was constantly worried that I wasn’t pronouncing Hebrew correctly, that I’d be identified as an outsider if I got to go back to Israel again. I was so embarrassed and afraid of being labeled Anglo.

Anglos are Israelis who immigrate from English-speaking countries, primarily the U.S., Canada, and Australia. Stereotypes of Anglos in Israel depict them as living in English-speaking areas, never making the effort to learn Hebrew, and being rich and entitled. Some Anglos can afford to live as Americans in Israel because of the power of American culture and economics.

Often, Anglos immigrate to Israel with money and the option to go back to America, a luxury not available to the Russians who came in the early 1990s, as we did to America, with the clothes on their backs. Some Anglos live in privilege, and they don’t even have to live in Israel while they live in Israel. Israelis make fun of this type of Anglo. I desperately did not want to be some Anglo girl.

So I worked on my accent. That semester, I also started singing Israeli pop songs to imitate Israeli accents. I was getting better. Then I went to Israel to work and everything changed. From the black and white Hebrew on the lines of my textbooks, I was forced into a real living Technicolor society where people got angry if I didn’t understand them, and where I had to speak to Real People, not my patient Hebrew professor, to survive.

The accent I’d brought with me seemed stupid and childish, and my reading comprehension skills, which had earned me straight As behind the safe desk of a classroom, just made me slow here. But I was just so, so desperate to be Israeli and not be perceived as a spoiled American that I talked to everyone. I talked to my coworkers who were eager to practice their English with me instead. I talked to the man selling ice cream at the kiosk on the corner across from our apartment. I talked to the guy who made the falafel. I talked to the lifeguards at the beach.

By the time I got home from work every night, I was mentally exhausted and disgusted with Hebrew. I carried a dictionary in my purse for half the summer. I only caught fleeting bits of conversations at restaurants. I blanked out at fast food places. I was so grateful for my roommates, for the ability of English words to roll off my tongue without mentally planning out each next syllable.

“I understand now, how you feel now as an immigrant, and I’m amazed by you,” I told my mom over the phone. One day, I decided to give blood to Magen David Adom in Tel Aviv. I had to call and make the appointment in Hebrew, and I’d gotten through a good deal of it, when the nurse asked me something medical-related terminology that I didn’t know. I panicked.

“Efshar od pam b’Anglit,” I asked her. Could you say it in English? I felt a ten-second-long pause. And in the pause was the feeling of my failure, my fear. I’d never been more embarrassed. Living in a country and asking the natives to speak MY language. It never crossed my mind that the nurse should be obligated to know English.

On that internship with me were a mix of native Israelis and American kids. Anglo kids. The American kids didn’t like speaking Hebrew, and they tried to get out of it as much as possible. During the whole internship, this made me feel irate, especially because almost all of them had had more exposure to Hebrew than me. They’d been brought up in Jewish households. They knew the holidays. They had the home court advantage, so to speak.

What I realized only much later is that most of the American kids had been raised with Hebrew by force. It wasn’t theirs, it was their parents’, the way Russian was my parents’, before I made it my own. As a result, they were embarrassed or flat-out refused to speak Hebrew.

Three weeks ago, I was on a conference call with someone from Israel. The call was mostly in English, but then she asked if I’d been to Israel and we switched to Hebrew. We talked for a couple minutes and then, right before she hung up, she said, “You have a beautiful Hebrew accent.” And I felt that feeling again. The feeling of standing on top of a mountain and looking down at the ground below you, sprinkled with your own glistening sweat.

As native something-else-speakers, we’ll never be as good as the sabras. We’ll never be able to toss the words carelessly off our tongues and not watch every noun ending, check every verb tense carefully three times before we release it. We will never say Moran without laughing. But we did work hard for our accents and they, in turn, left their mark on us and gave everything back that we put in. More people should be less afraid of the ascent, because the view from the top is kol-kach yafeh.