Arrested For Wearing A Tallit — Or Being A Woman? 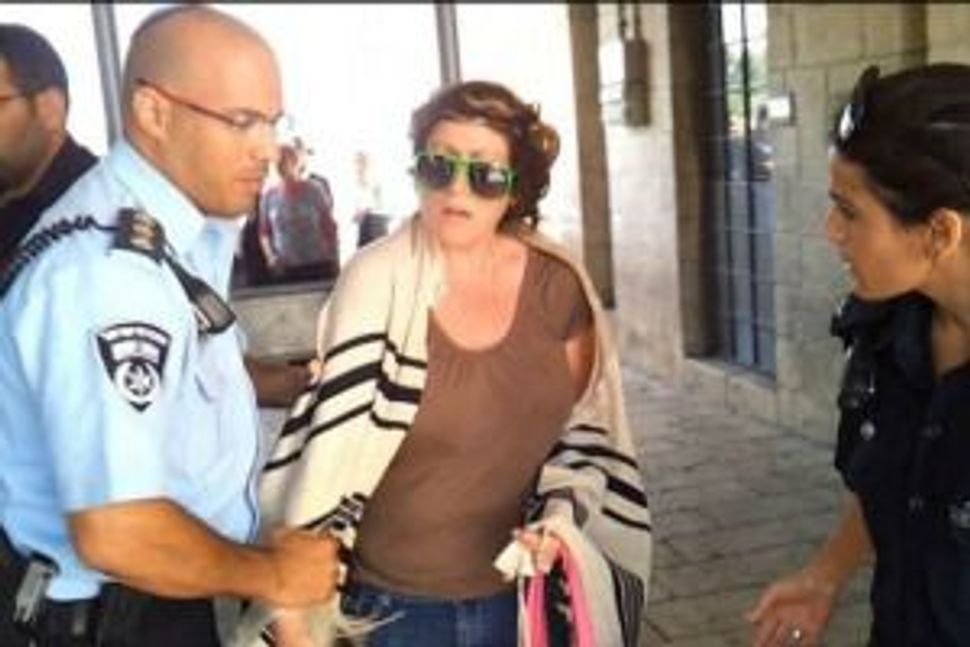 Deb Houben being taken away by the police. Image by Molly Livingstone

Four women were taken into custody by the police on August 19 (Rosh Hodesh Elul) for wearing a tallit (ritual fringes) at the Western Wall, making Israel the only country in the world where wearing a tallit can be illegal, and the only country where there is a proposed law — submitted by ultra-Orthodox politicians — to make Jewish women’s religious practice punishable by a seven-year prison sentence. It’s not so much wearing the tallit that is illegal, but rather being a woman that puts one at odds with the police. Being a religious woman can be a dangerous thing in Israel.

I recently spoke with Deb Houben, a 35-year old graphic designer and wine taster living in Jerusalem, who was one of the four women taken into custody. A graduate of the modern Orthodox Maimonides Day School in Boston, she made Aliyah in 2007 and has been participating in the monthly Rosh Hodesh prayers of Women of the Wall for around five months. This is the second time she has been picked up by the police during prayers. This time, she was charged with wearing a tallit and disturbing the peace, and sentenced to 50 days away from the Western Wall or a 1000 NIS (~ $250) fine.

SZTOKMAN: How did you get involved with Women of the Wall?

HOUBEN: My friend Molly works for Women of the Wall, and she invited me to come and I really love it. I really enjoy the experience of davening (praying) with this group, and lending my voice. My brother recently gave me a new tallit, although at the kotel we call it a “shawl.” It’s a traditional tallit, with black stripes, because that’s how I like it. It’s what my brothers wear, and it’s what my father wears. In fact, the tallit I used to wear was my grandfather’s.

When did you start wearing a tallit?

I started wearing a tallit when I started reading Torah regularly in synagogue, in around 2001. (My dad actually offered me tefillin for my Bat Mitzvah. I didn’t want it at the time. But had he offered me a tallit, I might have felt differently.) I love my tallit. It’s a totally different davening experience. It makes the davening very special. When I was young, I always watched my father wear his tallit, and he would take me under his tallit during the davening and I just loved that. When you put it on and wrap it around yourself and center yourself, you feel connected, and you feel protected. It’s like I have a different connection when I’m davening.

So what happened to you last week at the kotel?

I’ve worn the tallit every time I’ve participated in the women’s prayer group at the Kotel. This time, when I got there, I wrapped the tallit around my head and asked one of the police officers assigned to watch us if the way I was wearing my “shawl” was okay. (The police are always there watching us). He said it was okay. At least two other women also checked with the police officers. Despite the approval, as we started davening, the police officers started picking off women one by one. They just came over and started taking away women one at a time. They took me when we were starting to say Hallel, and then took someone right after me, but I couldn’t see.
So if you had their approval, why did the police start “picking you off?”

I have no way to answer this. I have no idea what changed from one minute to the next. … It seems very random and it seems like it’s just in the hands of the police what and when is okay. This time they just sort of decided that the more colorful tallitot were okay. I was being questioned about the color of my tallit and about my way of wearing it, and I was trying to answer in a helpful way, but it felt like a ridiculous conversation.

What happened after you were brought into questioning?

I called a lawyer friend to help me. It’s alarming even if you know what’s happening. Some of the women were shocked out of their minds that they were detained this way. This was my second time I was detained, but even so, you don’t get used to it.

I was in custody and then court for seven to eight hours… We agreed not to come to the kotel for 50 days or we would pay a fine of 1000 NIS (~$250). Last time it was a week or 3000 NIS (~$750) so it feels so arbitrary. The court procedure was very confusing, and it was hard to know what was happening, what was being said. The judge, a woman, Judge Einat Avman-Muller, was very quick and businesslike, and did not relate to the content or ethical issues involved. She just went through the details of the agreement.

How do you feel about all this?

I’m just stunned. I mean, even if you know it’s a possibility, if you know that things like this have been happening, it doesn’t stop [you from] being shocking. I also feel frustrated. And sort of angry. I’m angry that a law like this exists … and I reject the premise. I mean, why is there a law against me and not against the people who are rioting against us? … It feels like some people are looking too hard at what women are doing and seeing us as threatening. This is not what should be occupying the time of the police or the Knesset.

The Kotel is a place that people go to for connection. The tallit is about building that connection, physically, spiritually, metaphorically. The tallit is a beautiful thing, and the idea that there are people who believe I should go to jail for that, in Israel, is just profoundly disturbing.

Arrested For Wearing A Tallit — Or Being A Woman?