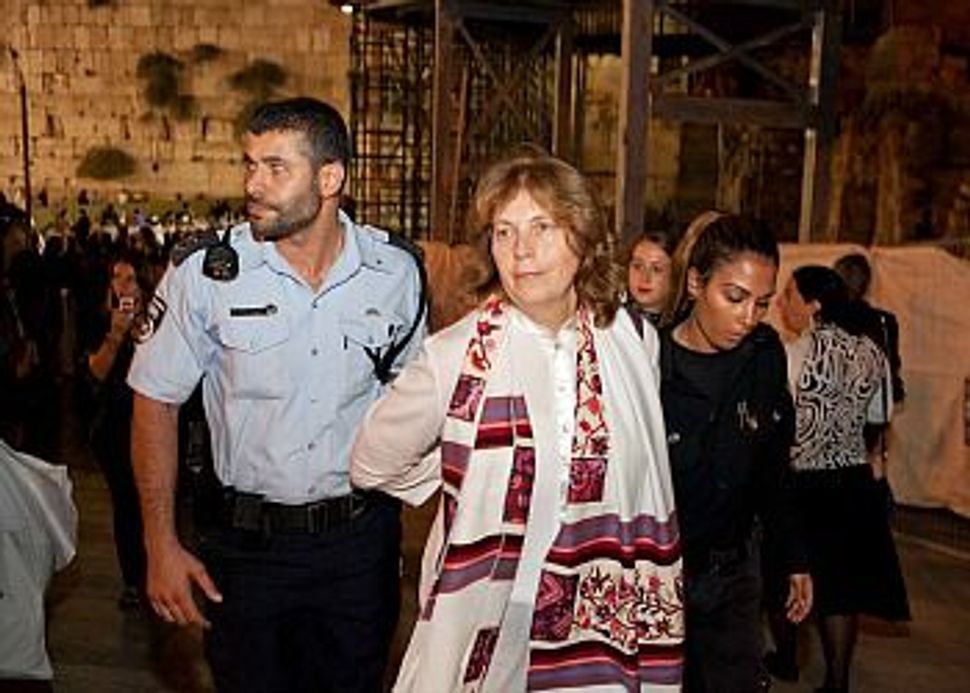 Anat Hoffman was arrested at the Western Wall on Tuesday night for saying the Sh’ma Israel, Judaism’s central proclamation of faith, out loud at Israel’s holiest site.

“I was saying Sh’ma Israel and arrested for it. It’s just unbelievable,” she said in an interview from her bathtub, where she was soaking limbs bruised from being dragged by handcuffs across the police station floor and legs shackled as if she were a violent criminal. “It was awful.”

Hoffman has been detained by police at the Western Wall six times in the more than two decades that she has led Women of the Wall, a group which conducts prayer services in the women’s section at the start of each Jewish month. But on Tuesday night, when she was arrested for the crime of wearing a tallit and praying out loud, she was treated far more violently by police than ever before.

“In the past when I was detained I had to have a policewoman come with me to the bathroom, but this was something different. This time they checked me naked, completely, without my underwear. They dragged me on the floor 15 meters; my arms are bruised. They put me in a cell without a bed, with three other prisoners, including a prostitute and a car thief. They threw the food through a little window in the door. I laid on the floor covered with my tallit.

“I’m a tough cookie, but I was just so miserable. And for what? I was with the Hadassah women saying Sh’ma Israel.”

Hoffman, who chairs the 24-year-old organization, went to the Kotel with about 200 women who are in Jerusalem for the Hadassah centennial conference. She was leading them in the Sh’ma when a policeman approached her and told her to stop reciting the prayer or she would have to go with him.

“I stopped saying Sh’ma but there were 10 cantors and 200 women around me, and they continued,” she told The Sisterhood. “Then he forced my hand behind my back and started walking me very fast to the police. Most of the Hadassah women were in shock. They didn’t know exactly what to do. The board of Women of the Wall followed me. When I was moved at 3:00 A.M. from one police station to another, two members were waiting there for five hours.”

Hoffman was handcuffed by police and told that she had refused to cooperate, “which was just a lie,” she said. “There was no resistance at all.”

When, at the police station, she was told to move from one chair to another, “I thought I should show him what noncooperation looks like,” and refused to move, she said. “When I refused to move, he dropped me to the floor and dragged me with the handcuffs.”

Later, when she was being taken to court, police put leg shackles on her. A judge released her on the condition that she agree not to go to the Western Wall for any reason for 30 days or be fined 5,000 shekels.

Throughout the entire experience, while she lay on the floor of her prison cell and when she was being led, in shackles and handcuffs, to court, “I was wearing my tallis.” Asked why they didn’t take it away from her, as they did her mobile phone, Hoffman, said, “They don’t recognize it as a tallis.”

“If she were alive today she’d be with me, right there [at the Kotel],” said Hoffman. “And to give him the Henrietta Szold prize, I think they should give it to the Women of the Wall who were born from the Hadassah conference 24 years ago and say ‘you are the continuation of Henrietta Szold.’ I’m asking whether Henrietta Szold’s spirit is still there.”

Referring also to Israel’s increasing gender segregation in public spaces, Hoffman said, “These topics are the final frontier, the essence of pluralism and equality. Israel has taken the holiest sites of the Jewish people and given them to a minority in Israel, and they are abusing their power,” she said, alluding to Haredi control over the Western Wall.

“We need to liberate the wall again. We have to demand it,” Hoffman said. “What is the function of arresting the chairman of Women of the Wall? The purpose is harassment of the group. To make the group frightened.”

On Wednesday morning, while Hoffman was still in police custody, Women of the Wall held prayer services for Rosh Chodesh Cheshvan. “Though the services went smoothly and quietly with no disturbance, police arrested Lesley Sachs, director of Women of the Wall and board member Rachel Cohen Yeshurun, in the middle of prayer,” the organization said in a statement.

“The two women were detained and questioned for several hours,” the statement said. “Upon release, the women were asked to admit to the crime of disturbing the public order, which they refused.”

The Reform movement seems to be taking seriously Hoffman’s plea for greater activism on this issue.

Rabbis Rick Jacobs, president of the Union for Reform Judaism, and David Saperstein, director of the Religious Action Center of Reform Judaism, “have a call into” Michael Oren, Israel’s ambassador to the United States, to speak with him about it, according to a spokesperson for the URJ.

Hoffman is executive director of the Reform movement’s Israel Religious Action Center, in addition to her work with Women of the Wall.