Power of the Purse Needed to Change Kotel Policy? 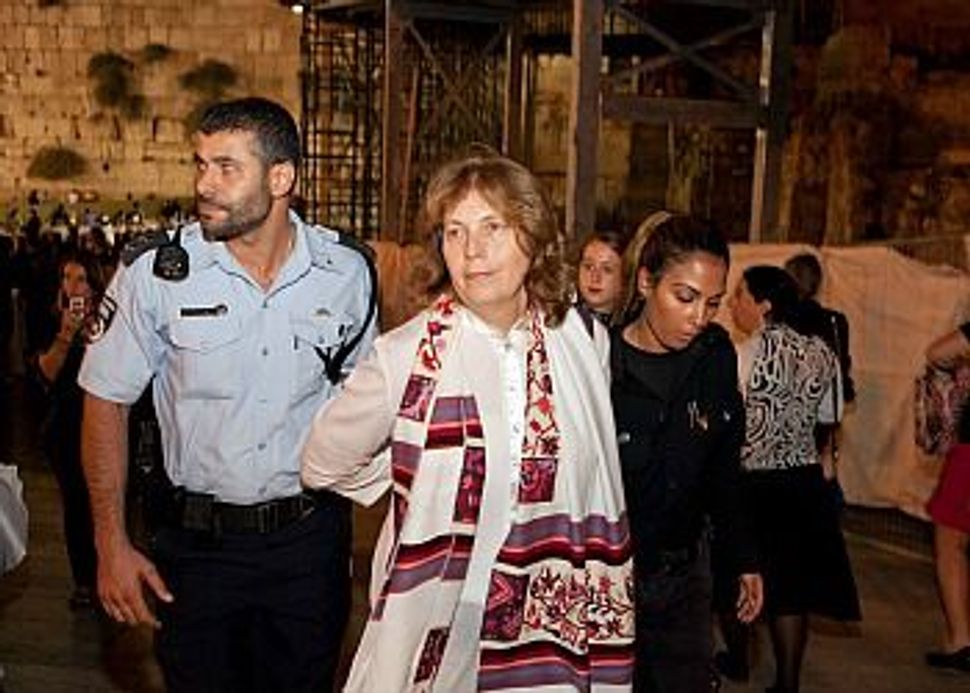 Anat Hoffman’s arrest at the Kotel and alleged rough treatment by Jerusalem police, on October 16, sparked immediate strong reaction among American Jews, though not from every group expected.

Many of those outraged by her arrest — for “disturbing the public order” at Judaism’s holiest site for wearing a tallit and leading other women in prayer — said it should serve as a wake-up call to Diaspora Jews complacent about the treatment of women at a site holy to all Jews. It is treated as an ultra-Orthodox synagogue by those who run it and so does not permit non-Orthodox women to pray at the Kotel in a way that conforms to their own religious practice.

Dan Brown, creator of eJewishPhilanthropy, wrote that Hoffman’s arrest was “a tectonic event” that we will look back on years hence and recognize as “the tipping point on conversations” about “the nature of a democratic society here in Israel.”

In an emphatic article on his site, he excoriated political and organizational Jewish leaders for remaining silent on the issue, and said that “the silence needs to stop.”

Jewish organizations, which can wield impressive influence on the government of Israel when they choose to, have not said what they are willing to do to pressure Israeli officials to change current policies at the Kotel.

No Jewish leaders have talked about using the power of the purse, about urging people to hold aside charitable contributions to their Jewish federations, for instance, until the question of women’s status at the Kotel is resolved in a way that serves all Jews — not just the Orthodox.

American Jews contribute between $2 and $3 billion a year to Israel, Brown told The Sisterhood.

Contributions to Jewish federations fund the Jewish Agency for Israel, which runs programming on the ground in the Jewish state. The federations’ umbrella organization, the Jewish Federations of North America, serves as a conduit for this money.

On JFNA’s website it touts a program called “Am Echad, Lev Echad: One People, One Heart,” whose purpose is “embodying the Jewish Agency’s commitment to pluralism and peoplehood” as one of JFNA’s “core priorities.” The program’s goal is “to ensure that the Jewish national home openly embraces every Jew.”

The Jewish Agency board of governors met this week, October 28 through 30, in Tel Aviv. Brown said that the agency’s Unity of the Jewish People Committee had a “hot” discussion yesterday (closed to the press) and is discussing a resolution on the issue of Hoffman’s arrest and freedom of religion at the Kotel.

While the Jewish Agency has no direct influence on the government, its voice is an influential one. “They are the only Jewish organization in the world where everyone sits “at the same table” — the various religious streams, the Israeli political parties, federation system, Keren HaYesod. They really are the only organization that can claim to speak for world Jewry,” Brown said.

In the meantime, the New York Board of Rabbis has issued a statement saying, “We call upon Israeli leaders to address this critical issue in a constructive manner respecting the different forms of Jewish religious expression and a shared appreciation for holy sites.”

Michael Balinsky, an Orthodox rabbi who is executive vice president of the Chicago Board of Rabbis, wrote on MyJewishLearning.com that “state laws defining proper religious behavior results in acts that do not preserve the sanctity, but defile it.”

While these statements from Jewish groups are the kind of response to Hoffman’s arrest and the reality at the Kotel that should come from the full spectrum of American Jewish groups, they are not likely to make much difference on the ground.

For that, I suspect, only the power of the purse will serve as enough of a fulcrum to change current policies into those that would allow for all Jews to experience spiritual connection at the Kotel — a site that belongs to all Jews.

Power of the Purse Needed to Change Kotel Policy?