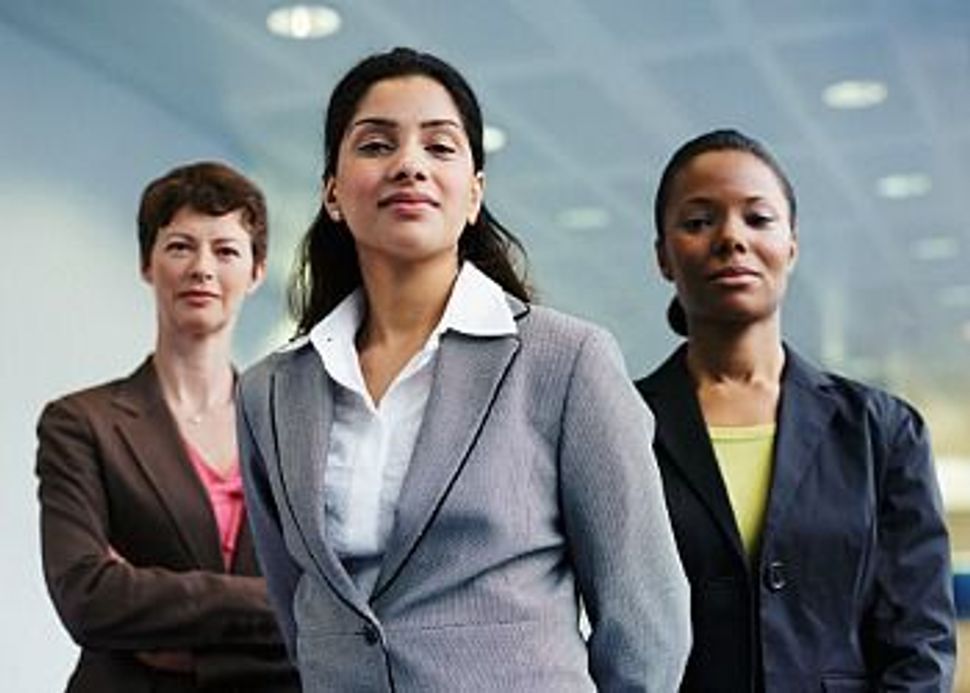 Women are running a growing number of Jewish organizations, at least those represented in “Slingshot: A Resource Guide to Jewish Innovation.” While about half of the groups selected in recent years for the annual guide of 64 innovative Jewish organizations have been led by women, this year the percentage has shot up to 64%, or nearly two-thirds.

It’s no accident that the groups selected for Slingshot, which tend to be relatively young and small organizations, place a premium on women’s professional leadership, said Rabbi Jill Jacobs, executive director of [Rabbis for Human Rights-North America][1], whose organization is one of those chosen for the guide.

“Slingshot highlights organizations outside the traditional mainstream, working with younger populations or social justice or the arts,” she said. “Mainstream Jewish organizations haven’t been as open to women’s leadership. So women realize we need to create a different kind of community and are creating what we want it to be,” she said.

This is the eighth annual guide put out by Slingshot, a New York-based organization of “next gen” funders, most of whom are in their 20s and 30s. This year, the guide includes 64 organizations — 50 in the main list, plus 14 more-established groups in a category called “standard bearers.” The guide will be published November 5, when a PDF download will be made available. The printed book, delayed by Hurricane Sandy, will be sent out to some 7,500 philanthropists a short time later.

Slingshot’s guide is intended to assist individual philanthropists and funding circles in their decisions about which organizations to support, said Will Schneider, the Slingshot Fund’s executive director.

Close to 200 groups applied for inclusion in this year’s guide, Schneider said. Four dozen volunteer evaluators winnowed down the number to 80 semi-finalists. Nineteen of the 50 groups in the main list are included for the first time, he said.

Slingshot will also highlight women’s issues next year, when the guide includes a supplement looking at innovative organizations focusing on the needs of Jewish women and girls. The goal of the supplement, being produced with the Jewish Women’s Foundation of New York, is to encourage groups with this focus to apply to Slingshot so they can be brought to the attention of a wider pool of potential funders than they are likely reaching now, said Schneider. Many of these organizations haven’t even thought to apply to Slingshot, he said. “We get five to 10 applicants in this space now. I know that there are dozens of organizations that could be applying.”

The women’s supplement will be the first in a series of additions to the annual Slingshot guide, he said, some focusing on geographic regions and others on interest areas.

Groups included in the annual guide can reap many benefits, Schneider explained. The increased visibility has helped previous years’ groups raise money. For example, one organization mentioned in the book later sent out a message to lapsed funders, and within a few days received $30,000 in additional funding.

While the guide isn’t a scientific study of trends among all Jewish organizations, “it’s probably the best year-to-year picture of innovation in Jewish life,” Schneider said.

Groups winning spots in this year’s guide include: A Wider Bridge, a San Francisco-based group established in 2010 that strengthens the connection between LGBTQ Jews and Israel through trips and college campus programming; Challah for Hunger, which started in 2007 and bakes and sells challah on college campuses through 50 local chapters to raise money to benefit such things as crisis relief in Sudan, and Hebrew SeniorLife Chaplaincy Institute, a Boston-based group founded in 2006 to train rabbis to provide pastoral care to the elderly.

Older organizations that won spots this year include Gift of Life Bone Marrow Foundation, a national group established in 1991 that works to match those in need of bone marrow transplants with potential donors; Jews for Racial & Economic Justice, a New York-based organization founded in 1990 to organize Jews around social justice issues, and the National Yiddish Book Center in Amherst, Mass., a library and archive for works in the Jewish language of Eastern Europe.

That there has been a significant bump in the number of innovative Jewish organizations that happen to be run by women selected by Slingshot indicates marked progress and could herald a trend in the larger Jewish community, said Shifra Bronznick, the founding president of Advancing Women Professionals and the Jewish Community.

In the past, said Bronznick, “Women always responded to the zeitgeist but took the invisible roles. Now women are doing that but taking the visible roles.”

“It’s a very positive sign of the changing times,” she said, but the groups highlighted by Slingshot inclusion need broader support than they currently have. “If those organizations aren’t robust, don’t have the funds, resources and leadership in the pipeline to support them, they won’t have the impact long-term that we’re hoping for to ensure our future vitality.”