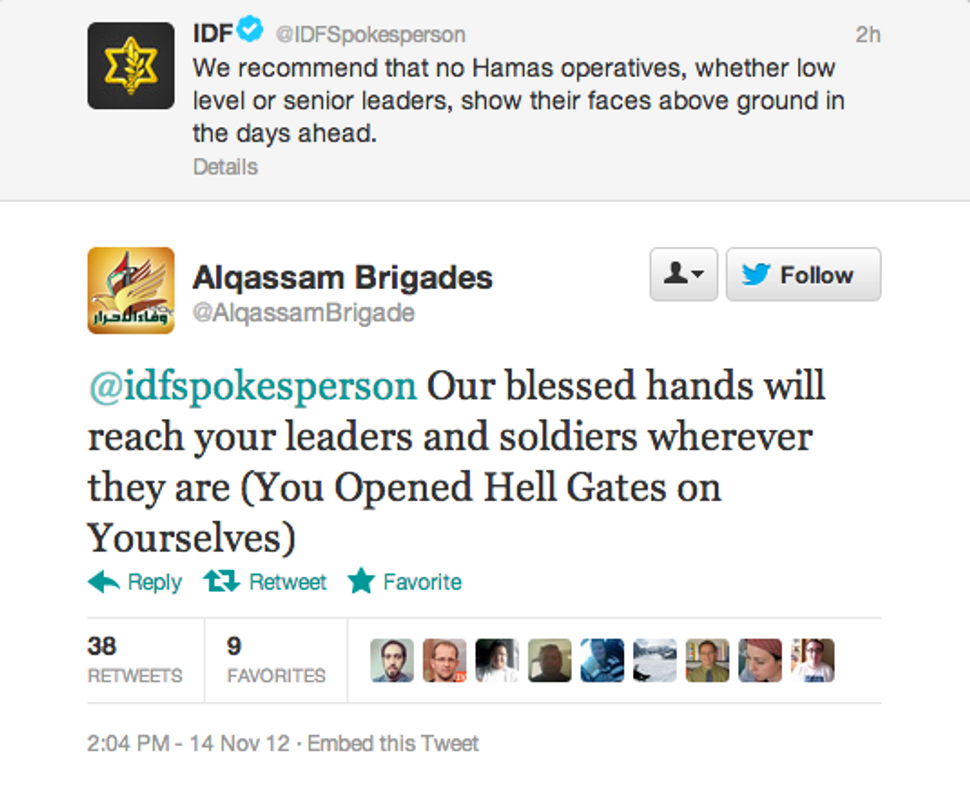 With the advent of the conflict in Gaza, known by the hashtags #gazaunderattack or #pillarofdefense, it’s a surreal moment to be a citizen of this earth.

For perhaps the first time on this scale, a war is being waged both in real life and on Twitter simultaneously.

As rockets and bombs fall, as children lie wounded or dead, and as people rush into bomb shelters, the IDF Spokesman account and the military wing of Hamas have been duking it out on the interwebs, even garnering the IDF a suspension from Twitter for issuing “threats of violence.”

Buzzfeed writes that the IDF is winning the Twitter war, but in my mind, the callousness of these tweets and actions on both sides precludes any winners.

Meanwhile, the IDF has posted YouTube videos of the assassination of a Hamas leader (who had been possibly negotiating a ceasefire) and created its own ready-to-go-viral Facebook memes.

And even as the smoke from bombs still poured forth, I saw images of young Gaza residents holding their cell phones aloft, promising even more viral images that showed the realities on the ground.

Welcome to war in the 21st century, say many bloggers.

Welcome to war since the beginning of time, says this blogger: an aggressive show-your-strength contest between leaders, historically male, that pins down and hurts bystanders caught in between.

In fact, I kind of think it’s a perfect representation of war: two macho-sounding “spokespeople” escalating threats on the Internet while innocents lose their lives on the ground. Yes, reducing the essence of war to a couple of social media moments may be an oversimplification in one sense. But in another sense, it is not: War has almost always been the decision of leaders enshrined safely in offices while young people fight each other and civilians suffer. As a famous Jewish poet, Bob Dylan, once addressed the “Masters of War,” “You sit back and watch/ When the death count gets higher.” Except this time, apparently it’s “sit back and live-blog.”

Maybe the ridiculous hypermasculine posturing displayed so nakedly on social media this week — combined with the many pictures already emerging of the dead, wounded and mourning — will help turn the world’s towards peace. Or maybe the gears of violence will just keep turning, and now tweeting, until humanity wakes up.