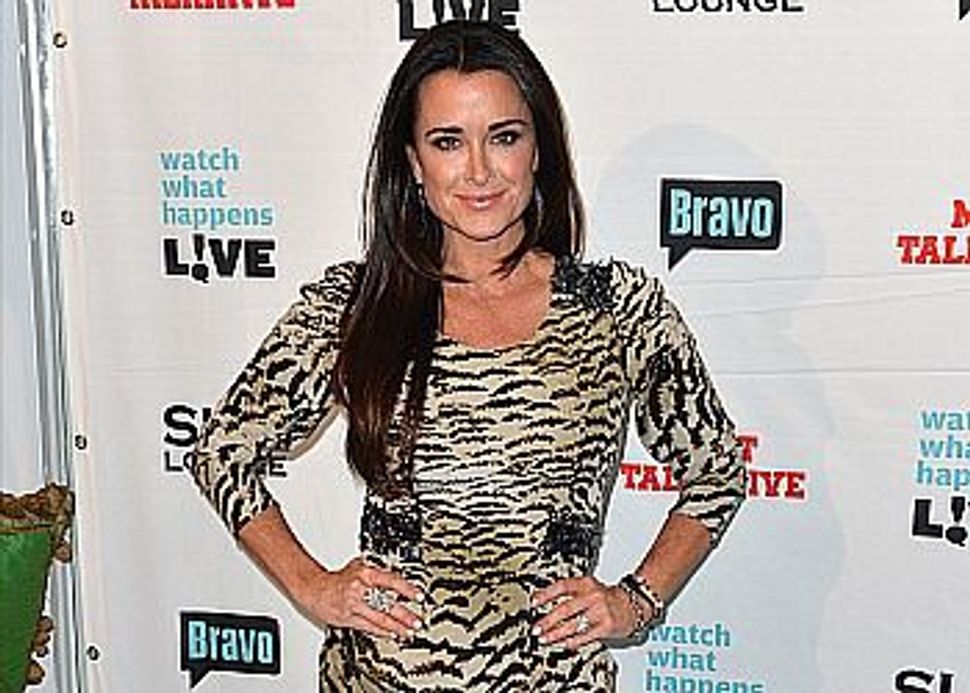 On “The Real Housewives of Beverly Hills,” plastic surgery and divorce are more common party discussion topics than religion or faith. But Kyle Richards, the very first Housewife cast in the franchise, is Jewish. She did an Orthodox conversion in order to marry her husband, Mauricio Umansky, whose family is Russian Jews via Mexico.

Kyle and Mauricio’s religion occasionally comes up on the show, but it mostly serves as interesting background material. Kyle’s real hook is her lineage: her oldest sister is Kathy Hilton, mother of Paris and Nicky, and her other sister is fellow cast mate Kim Richards. Both Kim and Kyle were child actresses, though Kim was much more successful, and the leftover resentments from the different ways they grew up are still causing problems between the two sisters today. Stir in the fact that Kyle and Mauricio’s marriage seems strong and their children are young, plus the fact that Kim is twice-divorced with adult children, and you have a recipe for conflict — which is exactly what “The Real Housewives” is all about.

Although we don’t see Kyle attending services or celebrating holidays, there are signs of the Umanskys’ Jewishness sprinkled throughout the show. There are mezzuzahs and other Jewish symbols in their home, and Mauricio’s mother Elsa makes references to the family’s Jewish identity. Right now, Kyle’s storyline is about being a busy wife and stay-at-home mom, so we get plenty of glimpses of Alexia, Sophia, and Portia, her three daughters with Mauricio. Sophia is 12, so perhaps a bat mitzvah storyline will be coming up?

There is, however, one confusing facet to Kyle’s Judaism. Last season, when the group took a trip to Hawaii, she admitted to being afraid of flying. To help calm her nerves, Kyle brought a copy of the Zohar on the flight. She has taken part in some events at Los Angeles’ controversial Kabbalah Centre, which is better known for its affiliations with stars like Madonna and Demi Moore. If Kyle were truly Orthodox, she wouldn’t be studying Kabbalah at all. But even as a more secular Jew, there are problems with opting for a Hollywoodified version of Kabbalah over a traditional one. Then again, Kyle’s interest in the celebrity-studded version of Kabbalah makes perfect sense in context of what “The Real Housewives of Beverly Hills” is about — the surface glitz, not the nitty-gritty details.

We’ve all heard the “Hollywood is run by the Jews” line enough times that we’ve started to believe it. And we’re quite lucky that some of the entertainment industry’s biggest stars (Spielberg, anyone?) happen to be Members of the Tribe. But while “Real Housewives of Beverly Hills” includes a couple of familiar tokens — the socialite who lounges at home in $3,000 shoes, the divorcee whose only source of income is her wealthy ex, the relentless and sometimes embarrassing social climber — its representation of Judaism is a convert who seems more interested in a watered-down version of the religion practiced by celebrities than she is in any meaningful spiritual experiences or family celebrations. Though Kyle has her shrill moments, particularly when she and Kim are getting into it, she doesn’t come off nearly as badly as Jill Zarin or Aviva Drescher, the two Jewish cast members from “The Real Housewives of New York.” As for whether we should be thrilled that Paris Hilton’s aunt and uncle could be on the synagogue’s membership list? The jury’s still out on that one.