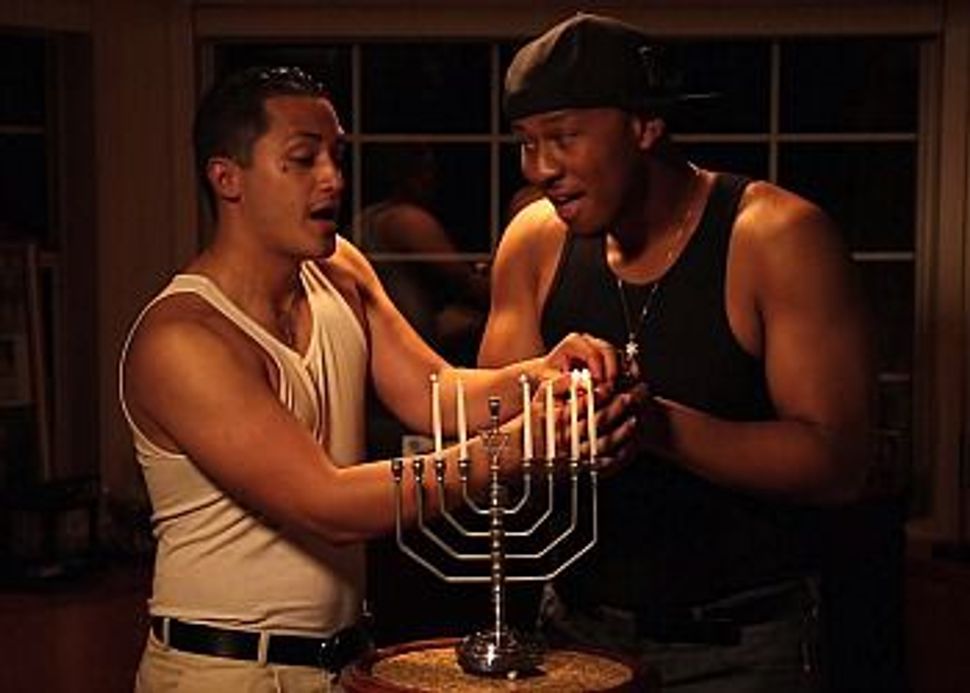 A few days ago three gentlemen, Jacob Salamon, Jared Bauer and Josh Cohen, released the first video in a series entitled “Bubala Please.” According to their Facebook Page, the series follows “two angry, misunderstood gangsters who come to find they’re both kinda Jewish. As their friendship develops, they decide to produce a variety show to share what it means to be a tough latke-making, dreidel spinning, menorah-lighting Jew.”

The two-minute video opens with the two characters, Luis and Jaquann, meeting on the street. Just as it seems as though they might go to blows, Jaquann notices a gold Chai around Luis’ neck. He pulls out his own gold chain, a Star of David, and the two are instant friends. They meet up in a normal looking suburban kitchen donning aprons that read “Kiss my Tuchas” and “Got Latkes?” to make latkes.

Browsing through their Facebook page confirms that the video is, indeed, hilarious. At least for some. As one rabbi commented, “Nailed it. Great job & happy Hanukkah.” Another commenter wrote, “I love the video. Can’t stop watching it.” “This is the best video on the Internet,” raves another fan.

Am I the only person who thinks the video is kind of stupid? Crass, misogynistic, rude, slightly racist with tired stereotypes — that’s a more accurate assessment in my humble opinion. But perhaps I’m too sensitive.

Of course we all know that Jewish people represent a wide variety of races and ethnicities with a wide variety of cultural traditions and languages. So what’s the big deal about two men making latkes a week before Hanukkah? Oh wait…it’s two people of color who are Jewish and gang-bangers making latkes! Now that’s funny! Or is it?

About a year ago, “Black and Jewish” became an Internet sensation. Two black Jewish women made a parody of the fact that they’re black and Jewish to the hit song “Black and Yellow.” Some people thought it was funny, some people found it offensive, but everyone had an opinion. I wrote my take on it for Jewcy.com, acknowledging that while the video was amusing, it was littered with problems — first and foremost the assumption that to be Jewish and black, Latino, or simply not white is strange, weird, odd.

While “Black and Jewish” had its problems, “Bubala Please” hits a nerve.

First, the producers describe the characters as “kinda Jewish.” Does this mean that they’re Jewish or not? How is one “kinda” Jewish? Does it assume that because they’re kinda not white then they’re only kinda Jewish? Second, the video portrays the men as foul-mouthed, knife swinging and sensitive but not too sensitive — because that would be gay and that of course makes the video even more hilarious. It also makes light of the fact that racism and racial stereotypes negatively affect people of color, especially Jews of Color.

And in case you need a reminder, blackface is back, and it’s supposed to be funny! Also, racism is dying, right? While racism is not necessarily the same as stereotyping, stereotyping a person or persons based on their race or culture is racist and racism isn’t — and has never been — funny. As a result, as amusing as it may be to see gangbangers make latkes, watching this video feeds the notion that it’s okay to make racial stereotypes and that Jews cannot possibly be black or Latino.

Is there anything else to say about this latest “Hanukkah” video? I’ve watched it five times and while I don’t think its funny when “unexpected” people speak Yiddish, I can’t help but wonder what the next segment of the series will be. How long can the producers play out the gangster black Jewish and Latino Jewish guy doing Jewish things schtick and who will keep watching?