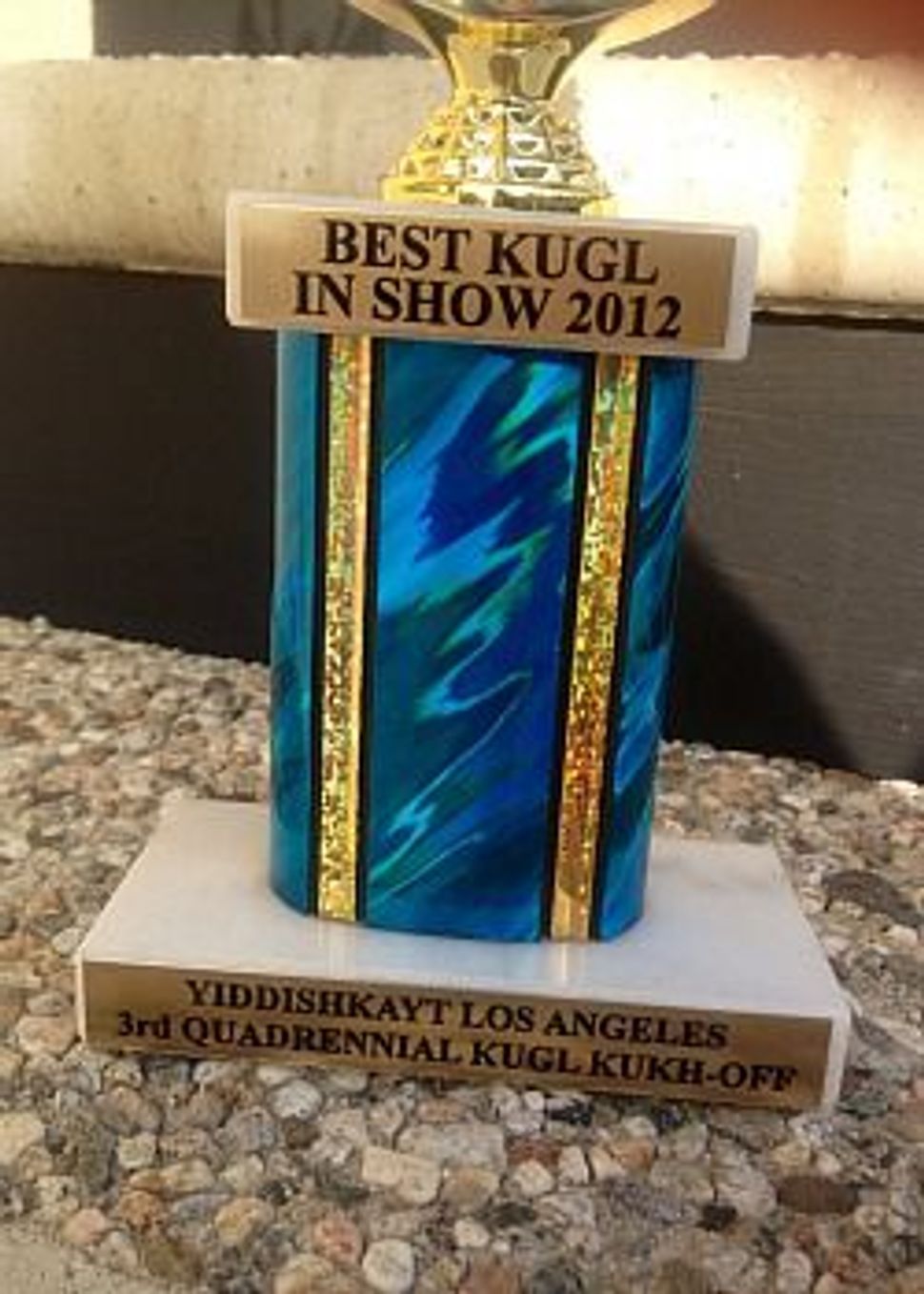 See this trophy? Other than academic achievement awards in school, this is the first contest I’ve ever won in my life. And I won it for Kugl.

My mom and I planned to enter the third quadrennial Kugl Kukh-Off, put on by Los Angeles cultural organization Yiddishkayt at the Silverlake Independent Jewish Community Center, as soon as we heard about it last month. The event sounded like a curiosity not to be missed, and inspired a slew of questions. Kugl taking center stage in the heart of this trendiest of Angeleno enclaves? Would I witness the birth of the next Williamsburg, where hipsters intermingle with Hasids? And, wait, Silverlake has a JCC? I thought I might even write about the spectacle for this here blog. But never did I imagine that I’d emerge victorious. I am now the reigning People’s Choice Kugl champion until my title is contested in 2016.

The truth is, in 2009 I had the opportunity to sample a Kugl that was — I was told — baked according to the recipe of “the winner” of 2008’s second quadrennial Kugl Kukh-Off (a competition in which I later learned there were 10 different winners for various categories). Well, let me just say this: Either the cook attempting to replicate that winning recipe botched the job or the recipe itself was sub-par, because I knew when I tasted it three years ago that if given the opportunity, I’d have a good shot at the title. When I saw the Facebook announcement for the contest this year, I sprang into action. I recruited my mother and confirmed my grandmother’s Lokshn Kugl recipe, but there was no need — we’d each baked it dozens of times. It is traditional, and it is perfection. And it doesn’t contain wretched cottage cheese. Feh! This Kugl tastes as much as possible like the Kugl my grandmother ate as a girl growing up in a tiny Polish village.

As soon as I saw the entry form for the contest, I knew exactly what might thwart us. On it was an option for — in addition to sweet and savory, noodle, potato and matzoh — a creative kugl category. And if I know Los Angeles, I know people will vote for the quirky, funny, outlandish option when given the opportunity. This is the state that elected the Governator, after all.

On the day of the competition, when I dropped my precious cargo off at the tasting room, I saw that there were a total of twelve contenders, and that three prizes would be awarded (Best In Show/People’s Choice, Judge’s Choice, and Runner Up People’s Choice). Members of every entering team got to vote, but non-baking would-be judges had to pay to cast a ballot. The masses lined up at noon, and tiny tasting cups of each Kugl were available for two hours — or while supplies lasted. Naturally, I thought my family’s recipe was supreme in the sweet/dairy/noodle category. But the crowd seemed to gather around the unconventional mushroom and goat cheese Kugl that just happened to be labeled as number one on the tasting table. I also thought some voters might be swayed by the cleverly named “Putting the Kartofl Before the Horse” potato Kugl. Ultimately, 79 ballots were cast.

My mom and I have baked this Kugl together several dozens of times. We’re like a well-oiled machine; for break-the-fasts, for Shavuos, for shivas we can whip up a Kugl in less than an hour and we always have the ingredients on hand. She couldn’t stick around for the awards ceremony because she had to get home to start prepping for our Hanukkah party. So, though she wasn’t there when our team was proclaimed the winner (both of our names were read aloud as the members of the winning team), I texted her immediately to let her know we had taken the prize.

As I sat awkwardly in a preschool chair and waited for the awards ceremony, I listened to Cindy Paley — a favorite songstress of my childhood — belt out Yiddish classics like “Oy Khanike, Oy Khanike” and “Tumbalalaike” to overtired children who’d spent the day at a Hanukkah festival complete with a petting zoo and face painting station. My palms started to sweat.

Finally, the winners were announced. Jill Burrows’ mushroom goat cheese Kugl took the runner-up award (phew!). Next, Josh Karbelnig took home the Judge’s choice award (it turned out he came in second place in the sweet category in 2008 — most improved!).

Would it be completely egomaniacal to admit that at this point I knew I had it in the bag? In the end, it appears that I won by a margin of about eight votes, which means several more people voted for my Kugl than just my parents and my boyfriend. A sheynem dank, Los Angeles, for surprising me with your good taste. If you’d like to see for yourself what the fuss is all about, give my Nana’s cream cheese-based recipe a whirl. It can be found here. I don’t know whether or not I bested 2008’s Best In Show winner, but if you think you can do better, bring it. I’ll see you in 2016.

Blend first 5 ingredients in blender. Cook noodles, drain and rinse them, put them back in pot and add butter. Let it melt till it’s dissolved. Lightly grease a pan, pour buttery noodles into pan, pour blended mixture evenly on top, then sprinkle as much cinnamon as you want on top. Bake at 350 degrees for one hour.