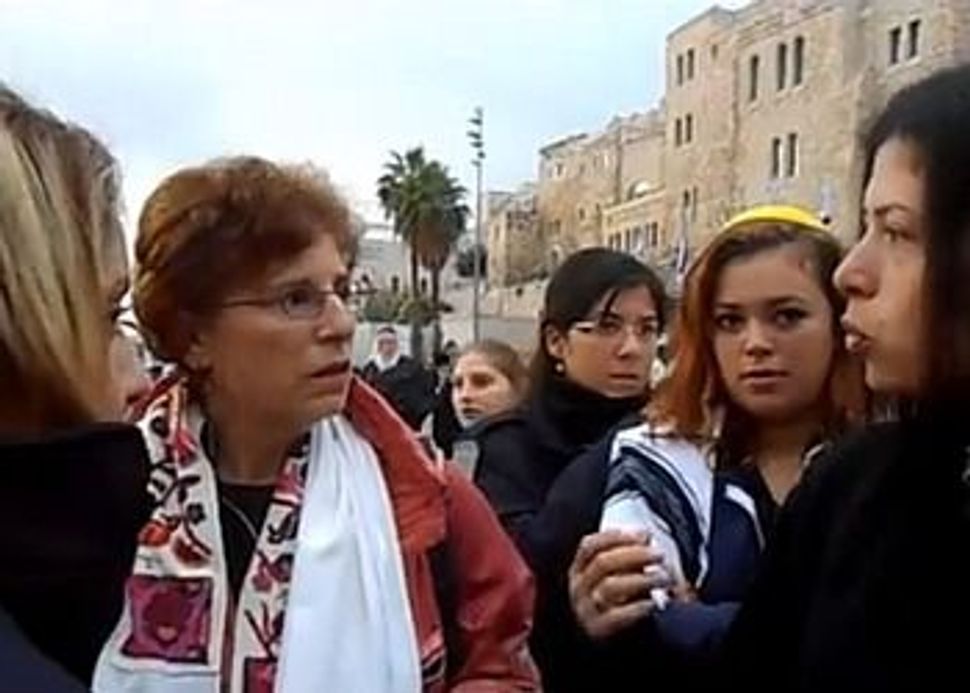 In what those involved are calling an escalation of the war against women who pray at Judaism’s holiest site, four women were forced away from the Kotel and detained by police Friday morning when new rules were put in place just before they arrived with Women of the Wall. The rules prohibited women from entering with religious ritual objects.

Eighty-eight women and 50 men went to the Kotel with Women of the Wall for Rosh Chodesh prayer, said the organization’s chair, Anat Hoffman, in an interview with the Sisterhood. At the security checkpoint, police told women that their tallitot and other ritual objects would be confiscated. Most complied.

But Rabbi Elyse Frishman and a few others wearing tallitot around their necks under winter coats just zipped them up and passed through the checkpoint.

“There had been times previously where they didn’t allow women to bring in prayer books. There has been a randomness to some of the prohibitions,” said Frishman in an interview. “There’s no law that says it’s not allowed. It was a random decree.” Frishman is the rabbi of Barnert Temple in Franklin Lakes, N.J., and editor of the Reform movement’s prayer book “Mishkan T’filah.”

“When I got to the Kotel to pray, I took my tallis out and put it on my shoulders. As I was turning to the first page, and we were very quiet, two or three policemen were standing there watching us,” said Frishman, who was planning to be in Israel for a family trip but arrived a few days early so that she could be in Jerusalem for Rosh Chodesh. “A younger woman walked over to me and quietly said, ‘I am afraid to wear my tallit, and may I stand next to you and pray?’” Frishman said.

A police officer approached and indicated that she should remove her tallit, but Frishman refused and was steered by her elbow out of the women’s section into the larger Kotel plaza as three other women were also removed from the women’s section. Two of them are 18-year-old British students spending a gap year in Israel, said Hoffman.

“The police told us not to talk to each other. I put my tallit back on and we opened our prayer books and began to daven a bit. The police didn’t say anything, and I realized we can talk by teaching. I taught the other women a new melody to the Sh’ma, and a midrash [rabbinic interpretation] on brachot [blessings] relevant to our situation,” Frishman said.

One by one, Frishman said, the police took the women for questioning. A police officer asked her repeatedly if she understood why she was there, and Frishman said she did not. She was asked to sign a written complaint in Hebrew, but refused. A police officer said, “‘You are suspected of going to make a public disturbance. Will you sign that you heard this?’ I said no, I don’t understand what you mean. ‘Well you were wearing a tallit.’ There is nothing in Jewish law or Israeli law that says I can’t wear a tallit,” Frishman said. “She asked me to sign something saying I could not come back to the Kotel for 15 days. I said no. She warned me if I were to come I could be arrested and fined 3,000 shekels. ‘Do you understand that?’ she asked. No, I said, I do not understand,” said Frishman. “We knew not to sign anything, that we hadn’t done anything wrong.”

Both of the previous times Frishman prayed with Women of the Wall at the Kotel, a few years ago, she wore a tallit without any interference. “There is a much greater vigilance now as they try to squelch through intimidation what men and women want. There were many men with us today and they were very angry.”

“The crackdown says to me that there is an even greater need for men and women to know about this and to act on it,” Frishman said. Going to the Kotel on Rosh Chodesh “is a way to make our voices heard and work towards what’s right. This is about a site that is sacred to all Jews, and should not be Orthodox, Conservative or Reform. It’s a site that should be for all Jews.”