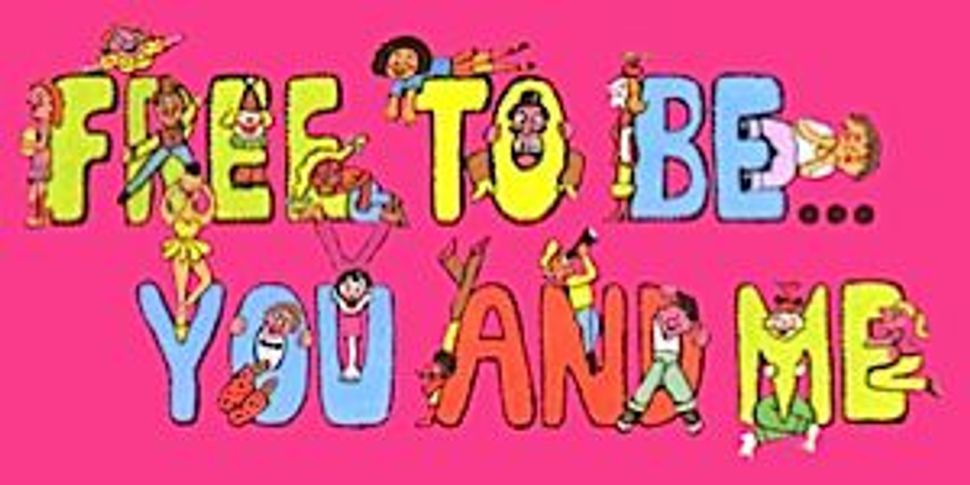 Image by Free To Be Foundation

A new book celebrating the 40th birthday and impact of one of the greatest cultural touchstones of 1970s American childhood, “Free to Be… You and Me,” has just been published. “When We Were Free To Be You and Me: Looking Back at a Children’s Classic and the Difference it Made,” is a rich compendium of essays from people involved in the Free To Be project and others who, like me, were children affected by its lessons.

The new book, edited by Lori Rotskoff and Laura Lovett, with a prologue by “Free to Be” creator Marlo Thomas, features essays looking back with fond nostalgia. Other writers assess the ways in which the hopes that the “Free to Be” creators had when they first met in 1972 have yet to be fulfilled.

The messages in the original book and television special reflected the enormous changes sweeping gender roles in 1974. Previously fixed social norms were in flux. I was 10 years old then, and loved my big “Free to Be” book. Even as I watched my mother try career paths she had not been raised to consider, it seemed that my own possibilities would be limited only by ability and drive. There was something freeing about watching Marlo Thomas and Harry Belafonte sing about mommies and daddies having any job they wanted. The wonderful silliness of Mel Brooks voicing a baby puppet while sounding more like a Miami Beach retiree, and the sweetness of burly pro football player Rosey Grier singing “It’s All Right to Cry” were obvious even to children.

“Free to Be” quickly became justly celebrated, as much a cultural lodestone for my generation as Harry Potter would became for our children two decades later. In an interview with The Sisterhood, “Free to Be” writer Letty Cottin Pogrebin said that “we had no idea” it would become an icon.

“The moment was right,” said Pogrebin. “This was the democratization of the feminist message in all directions. Through television, a record and a book it went to homes, to schools, to libraries,” she said. “In those years you could make a bang with a very small buck. There were seven channels, three newspapers, no Internet. So when something came out it was seen by everybody at the same time and became the word of mouth thing at the moment,” she said.

The people on the pages and the screen in “Free to Be” were among the decade’s biggest stars, making it widely appealing. And “for people who couldn’t accept feminism in its adult form, this touched them at the level of the child within,” Pogrebin said.

Many of the people who created “Free to Be” — Pogrebin and other contributors, including Broadway and television actors and writers like Carl Reiner and Sheldon Harnick — were Jewish.

Francine Klagsbrun edited the “Free to Be” book. In the new anthology of essays, she writes about bringing the material home to read to her then-3-year-old daughter, and realizing that “it was downright subversive, in the best sense of the word.”

In her essay in the new book, “A Thousand Fond Memories and a Few Regrets,” Pogrebin writes of the energy and hope that gave birth to “Free to Be,” and of the definitions in American culture of “masculine” and “feminine” which still seem so fixed, and so limiting to so many people. She writes in her essay of all that seemed promising but in 2012 has suffered from cultural backsliding, like the fact that most everything Barbie-related is still pink, and that most of the people she sees on the ball fields in Central Park are still boys and men.

“Today too many girls hate their body images; some as young as eight already have eating disorders. Too many boys are becoming bullies or are being bullied,” Pogrebin writes. “This isn’t the world we envisioned 40 years ago. It wasn’t supposed to turn out this way.”

Today it’s a little heartbreaking to watch “When We Grow Up,” with Michael Jackson singing about not needing to change when he grows up. We watched, horrified, as Jackson transformed himself from the African-American teenager we see in “Free to Be” into a man made nearly unrecognizable by multiple cosmetic surgeries, who was dead at 50 from his own excesses. But that’s the adult view.

My 10-year-old self loved watching him cavort in his overalls, seeming so free as he goofed and played. My youngest child is now 11 years old and sometimes, when she has for a moment stopped playing on a digital device, will whirl and twirl, goof in the mirror or do a little jig, feeling free. It’s a beautiful moment. And over far too soon.