Is Kotel Alternative Women’s Back of the Bus? 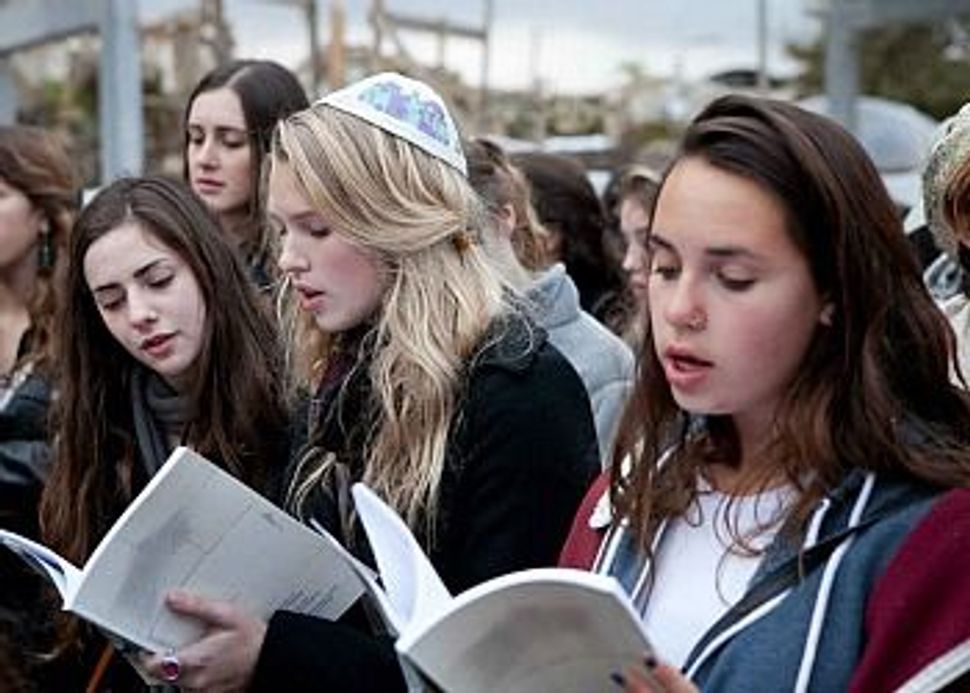 Two leading thinkers went head to head on the next best step for Women of the Wall regarding the quest to make Judaism’s holiest site a place where women can pray any way they want — even if that means wearing a tallit or tefillin.

Yossi Klein Halevi and Rabbi Rachel Beit-Halachmi, both American-born scholars at the Shalom Hartman Institute in Jerusalem, debated whether Women of the Wall should accept being required to pray at Robinson’s Arch or continue to push for equal access at the Kotel proper.

Women of the Wall has been meeting at the Kotel to mark the start of each Jewish month since 1988 (including some Orthodox members). Leaders and participants in the group have in recent months been detained by police for disturbing the peace by wearing prayer shawls or leading the Sh’ma Israel prayer in full voice. On Dec. 14, women had tallitot confiscated by security guards. Those who got close to the Kotel with their prayer shawls on were forced away from the prayer site by police. They [included]( https://forward.com/sisterhood/167710/four-women-detained-at-kotel-for-wearing-tallit/] New Jersey Reform Rabbi Elyse Frishman. In October, WoW leader Anat Hoffman was arrested and allegedly mistreated by police when she began to lead about 200 Hadassah women in prayer there. In 2003, Israel’s Supreme Court ruled that WoW should pray at Robinson’s Arch, an archeological dig site adjacent to the space known worldwide as the Western Wall. Since 2009, in response to apparent instructions from the rabbi who oversees the Kotel, police have regularly arrested women praying at the Kotel for wearing a tallit or carrying a Torah scroll.

Both Klein Halevi and Sabath Beit-Halachmi support the cause of women’s prayer at the Kotel, they said. They differ on the best way to achieve it, however. Their Dec. 18 debate was broadcast live on the web from the Hartman Institute, and built on a conversation in print they began on the pages of The New York Jewish Week.

In this week’s debate Klein Halevi urged WoW to accept the compromise of Robinson’s Arch. Israeli authorities recently offered to renovate the space so that it can more comfortably accommodate large numbers of Jews who want to pray as a community of women or in an egalitarian setting, he said. Currently set up as an archeological museum without large public space, it is also up against what remains of the wall surrounding the Temple Mount. Non-Orthodox bar and bat mitzvahs are currently conducted there, usually by families visiting from the Diaspora.

“My plea to Women of the Wall and those who actively support them is to declare victory” and “consecrate” Robinson’s Arch “as a place of prayer,” Klein Halevi said. “This is an unprecedented opportunity.” The alternative, he said, is to “say we’ll beat our heads against the wall figuratively and literally, and to continue what is a futile effort that only results in bitterness, frustration and the desecration of the name of God and Israel.” He went on to say that WoW should demand that the government renovate the space properly and call it “the Southwest Kotel instead of Robinson’s Arch. I see this as a question of creating parallel sacred spaces.”

Sabath Beit-Halachmi compared his proposal to accepting segregation’s obligation to sit at the back of the bus “because the air conditioning is better.” Women of the Wall members don’t want more separation, she said. Instead, there is a time-sharing proposal currently being discussed with the office of Israel’s prime minister that would permit Orthodox prayer customs on certain days and egalitarian prayer customs on others. “I don’t accept your absolute conviction that it is an impossible situation,” she told her colleague. “There are many other options on the table before us.”

Klein Halevi said that her approach is a lost cause. “The tragedy is that the Kotel has fallen into ultra-Orthodox hands,” said Klein Halevi. “There is no way to pry the area of the wall we identify as the Kotel today from those hands without a major cataclysm among the Jewish people in Israel.”

“You are telling the non-Orthodox Jewish world to continue its campaign in an area that it can’t win,” said Klein Halevi. “If the Israeli government had not offered to renovate Robinson’s Arch, then I would say we’re really talking about the back of the bus. We have a chance here to build our own bus.”

He called current Women of the Wall prayer meetings on Rosh Chodesh “a manipulation of prayer” and said that the group uses “prayers as a means for demonstration.” He also criticized calling it segregated. “To use as a model of segregation when we’re talking about sacred space to me is deeply inappropriate,” he said. “Rather than fight or squabble over sacred space, we need to figure out how we can all pray in proximity if we can’t pray together.”

Sabath Beit-Halachmi maintained that Women of the Wall and others should not give up on the hope that they will one day be able to pray according to their custom at the Kotel. “It is not an Orthodox synagogue. It is a site of huge spiritual and collective and archeological importance to the Jewish people. We all need to have access and to be able to give voice to our prayer and celebrations there. There is no alternative but to continue this conversation.”

Is Kotel Alternative Women’s Back of the Bus?