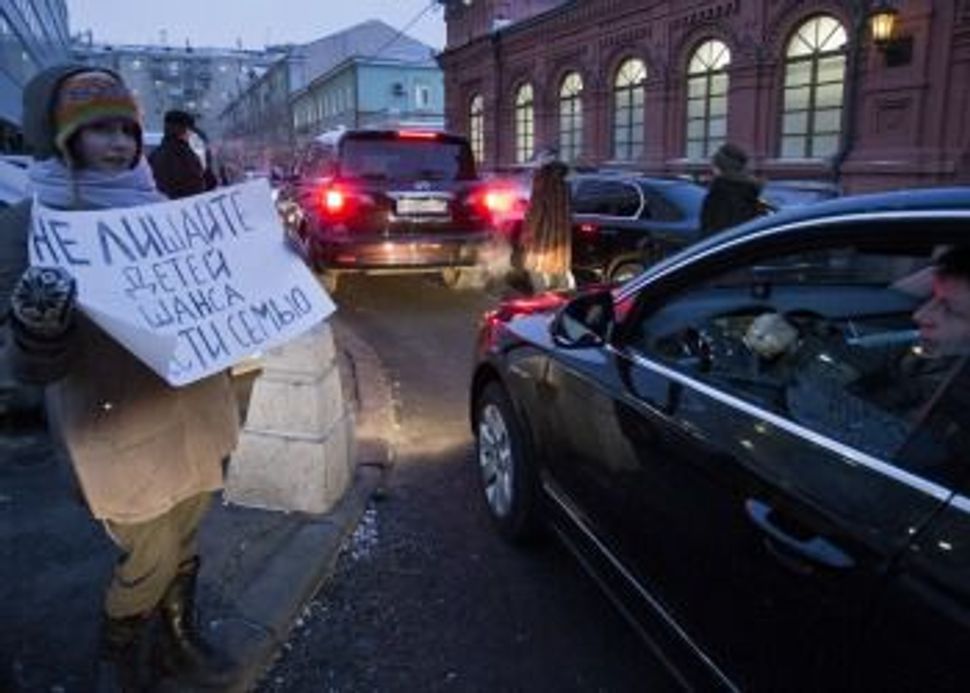 A young woman protesting the Russian adoption ban holds a poster reading: ?Don?t deprive children of a chance to find a family!? Image by Getty Images

On December 28, Russia legally banned the adoption of Russian children by U.S. citizens. President Vladimir Putin signed the controversial legislation (which takes effect on January 1, 2012) following its approval by the upper house of the Russian parliament earlier last week.

The ban is part of a package of retaliatory measures against the Magnitsky Law, American legislation aimed at punishing Russian human rights violators. The Kremlin has also cited the deaths of 19 Russian children due to abuse by their American adoptive parents as a reason for the ban.

Russia is the third most common source of international adoptions for Americans, following China and Ethiopia. However, the U.S. is the largest single foreign destination for Russian orphans. Approximately 1,000 Russian children have been adopted by Americans annually in recent years. Around 70,000 have been adopted by U.S. citizens since the fall of the Soviet Union.

It is unclear how many of those 70,000 children went to Jewish families. Seventeen percent of the 750 Jewish American adoptive families who responded to a survey conducted by the Adoption and Jewish Identity Project adopted children from Russian from 1990 through 2011. However, Dr. Jayne Guberman, the project’s co-director warned, “The survey respondents are not necessarily representative of the entire American Jewish population. For example, they are probably more highly Jewishly identified since they were interested in and willing to take the time to complete a long and complex survey.”

According to Kathy Brodsky, Director of the Ametz Adoption Program at the Jewish Child Care Association in New York, there are no readily available statistics. “What I can say is that Russia is the No. 1 source for Jewish families seeking foreign adoptions,” Brodsky offered. “It’s usually about the family’s wanting to mirror its family roots as closely as possible.”

Upset about the new legislation, Brodsky said, “We should all be focused on the kids. Putin is preventing the kids from finding a permanent, loving family.” She is particularly concerned about the approximately 50 children who were in the final stages of the adoption process, who now find themselves in legal limbo.

San Diego resident Mark Kerbel has the same worry. He and his wife Sabrina adopted an 18-month-old boy from Russia in 2000. “As soon as we heard the news, we felt crushed for the children who are in process,” he said. “Even if there is a chance for them to be adopted by Russian families, there are age windows that close quickly. No one will want an older child if they can have an infant.” Kerbel fears for these orphans’ futures. “Some may never be adopted and will be institutionalized for life and end up as runaways on the street by their teens.”

Raymond Sheffield, of San Jose, feels the pain of the prospective parents who have already made two trips to Russia and are emotionally invested in the pending adoptions. In addition, he foresees a considerably rougher future for all children in Russian orphanages. “Everyone in the adoption community is concerned that the babies will suffer,” said Sheffield, who, with his wife Angela, adopted two little Russian girls, now aged five and seven.

“The baby homes get a lot of financial support from America,” Sheffield noted. “Without those dollars coming in, it is going to get really bad. The cost to Russia to run the orphanage system is tremendous.”

Gary Gladstone of Toronto, who, with his wife Melanie, adopted a nine-month-old boy in 2000, said he was always afraid of hiccups in the process. This time, the worse case scenario has happened. “I was always paranoid that Putin would wake up in the morning one day and decide to ban some or all foreign adoptions,” he shared.

“There have been other times when Russia has suspended U.S. adoptions, but this time it’s different,” Sheffield said. “It’s all politics,” he lamented.

Kerbel expressed even more forcefully the same sentiment about Russian orphans being used as pawns. “This is absolute, horrible political blackmail at its worst,” he said.